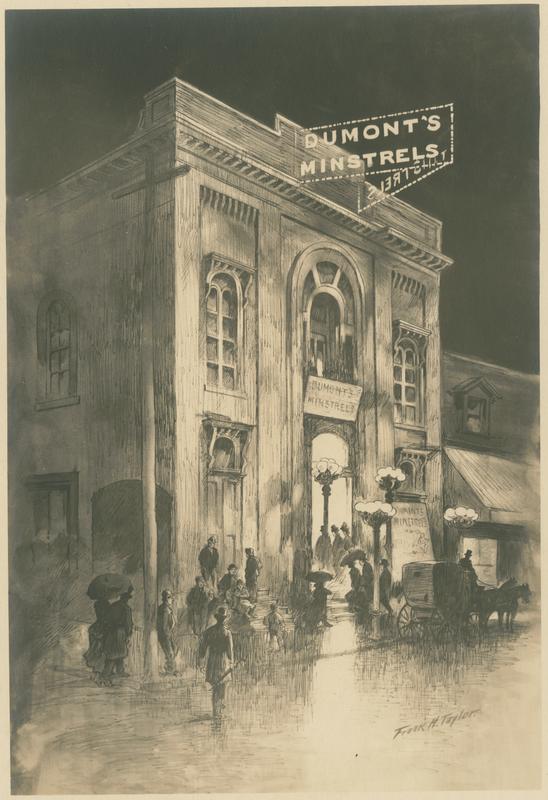 By the time Taylor made this drawing in the 1920s, the theater had been demolished, and the current version of Dumont's former troupe, Welch's Minstrels, was operating out of the old Dime Museum theater a few blocks to the north, at the corner of Ninth and Arch. But the sentimental title that Taylor gave to the drawing about the demolished minstrel theater on 11th Street is revealing.

The overwhelming majority of the accounts of minstrel shows by white Philadelphians from the Nineteenth and early Twentieth Century have one common theme: how much fun they were! The genre was always associated with innocent pleasure. This sense of glee and happy memories was true for the descriptions by other Americans of the era, too. We even have accounts from such eminent figures as Walt Whitman and Samuel Clemens about how much simple delight they had derived from minstrel shows. It's amazingly consistent, across the board.

Part of the phenomenon was likely due to the fact that many American children's first experience at the theater was at a minstrel show. In fact, I've also seen accounts that many people remember their mothers teaching them how to do little minstrel shows of their own, in their homes. So with all these associations of childhood fun, it was difficult to convince anyone that they might be doing a larger societal harm by going to minstrel shows. But even grownups seem to lose all inhibitions when they went to minstrel shows. By the time Taylor made this drawing, he was likely thinking of his mother and father taking him to minstrel shows, and how relaxed and happy they were. Who doesn't want to remember their parents as relaxed and happy?

When I teach this subject, from the perspective of the early 21st Century, many of my students are seemingly under the impression that minstrel shows were obviously evil, just endlessly mean hatefests. But unfortunately the truth is even more insidious than that. If an experience feels like it is all about fun, freedom, and humor, then it's hard for someone to see, at the time, that it might actually be based on deep racism. Almost nobody, as far as I can tell, saw that all the supposed humor was meant to dispel white people's apprehensions about the presence of Black people in Northern cities.

At this point, by the way, let me repeat what I said in the podcast episode: I will not be sharing much in the way of imagery from historic minstrel show posters, ads, or sheet music in this post. I'm not going to quote lyrics or jokes from minstrel shows. There's a lot of that stuff all over the internet, and I don't care to add to it. Instead, let's look at how the genre was sold and marketed in Philadelphia, specifically.

The conscious effort to portray urban Black men as ridiculous and sexually threatening dandies, and rural Black men as happy slaves was perhaps made more explicitly in the early days of minstrels shows in Philadelphia. Here is a newspaper ad for the Virginia Serenaders at the Chinese Museum on 9th and Sansom Streets - from July 12, 1844, in the Philadelphia Public Ledger: 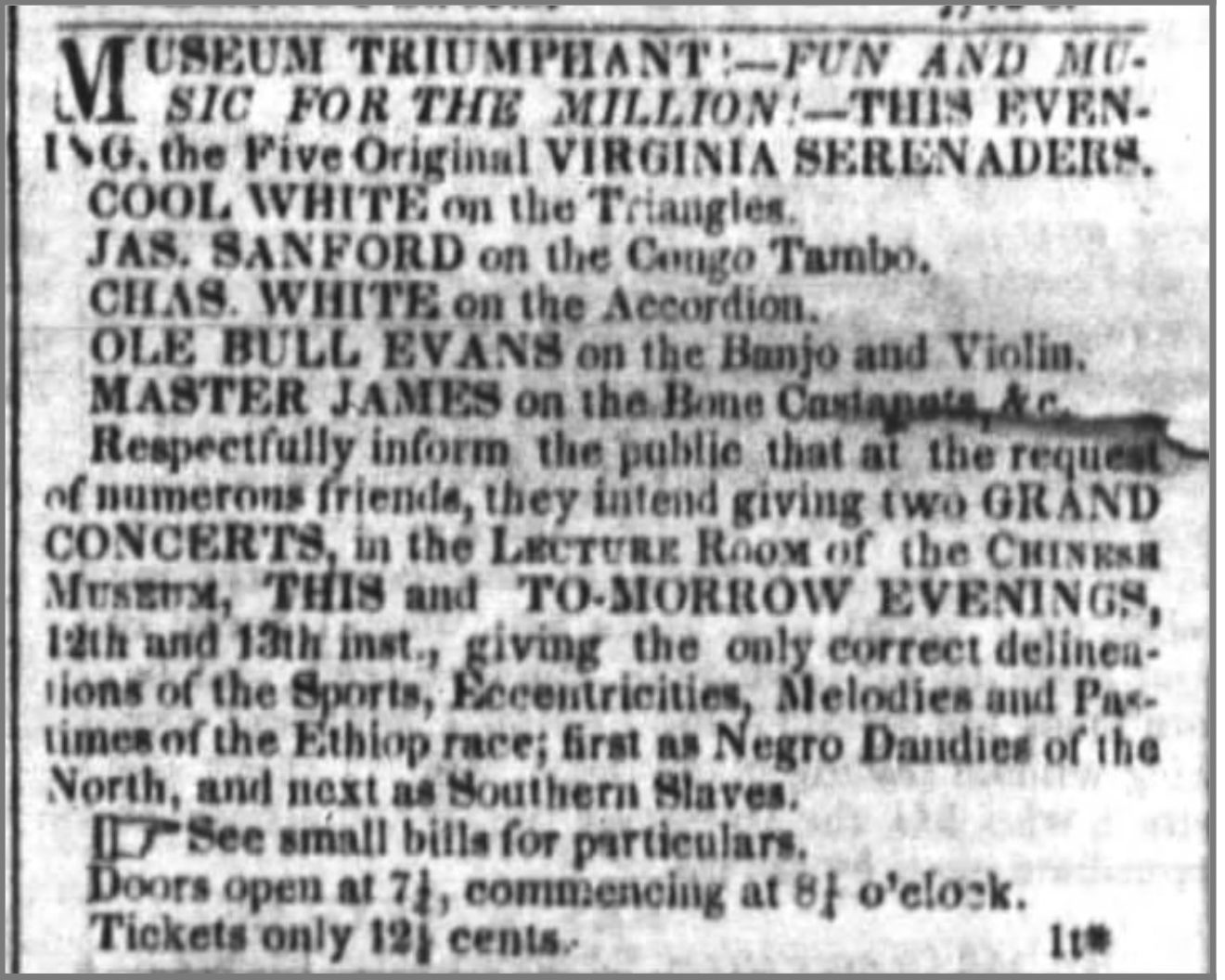 Below is the earliest rendering of the exterior of the first dedicated Philadelphia minstrel theater, Sanford's Opera House on 12th Street near Chestnut. You can just make out the statue (possibly wooden) of a top-hatted minstrel holding the flag from some sort of armature attached to the upper story window.  This figure was a likely burlesque of the statues that adorned the facades of the 'legitimate' theaters in town. (The Chestnut Street Theatre had its figures of Comedy and Tragedy, the Arch Street Theatre had its statue of Apollo and his lyre, the Walnut had its eagle.) Doing burlesques was rather Sanford's stock-in-trade, in fact. In his book Love and Theft, Eric Lott documents how Sanford was one of the first minstrel show producers to do a staged burlesque version of the novel Uncle Tom's Cabin - which would later become a common feature of many minstrel shows.

To draw more attention to the theater at night, Sanford also installed a series of gas lamps on all the second  and floor windows. In this drawing, a crowd of people is shown thronging the street in front of the entrance door. Though this may have been part of the advertising campaign, apparently Sanford was doing very good business there. A former dancing academy on the second floor of the commercial building, the 'opera house' only lasted a few months in 1853 before it - like so many other theaters of the era - suffered a fire. Perhaps all those gas lamps weren't such a good idea. Eventually Sanford moved his operations to the Eleventh Street Opera House, and then to another venue on Race between Second and Third Street. There's an image of its interior farther down this post. 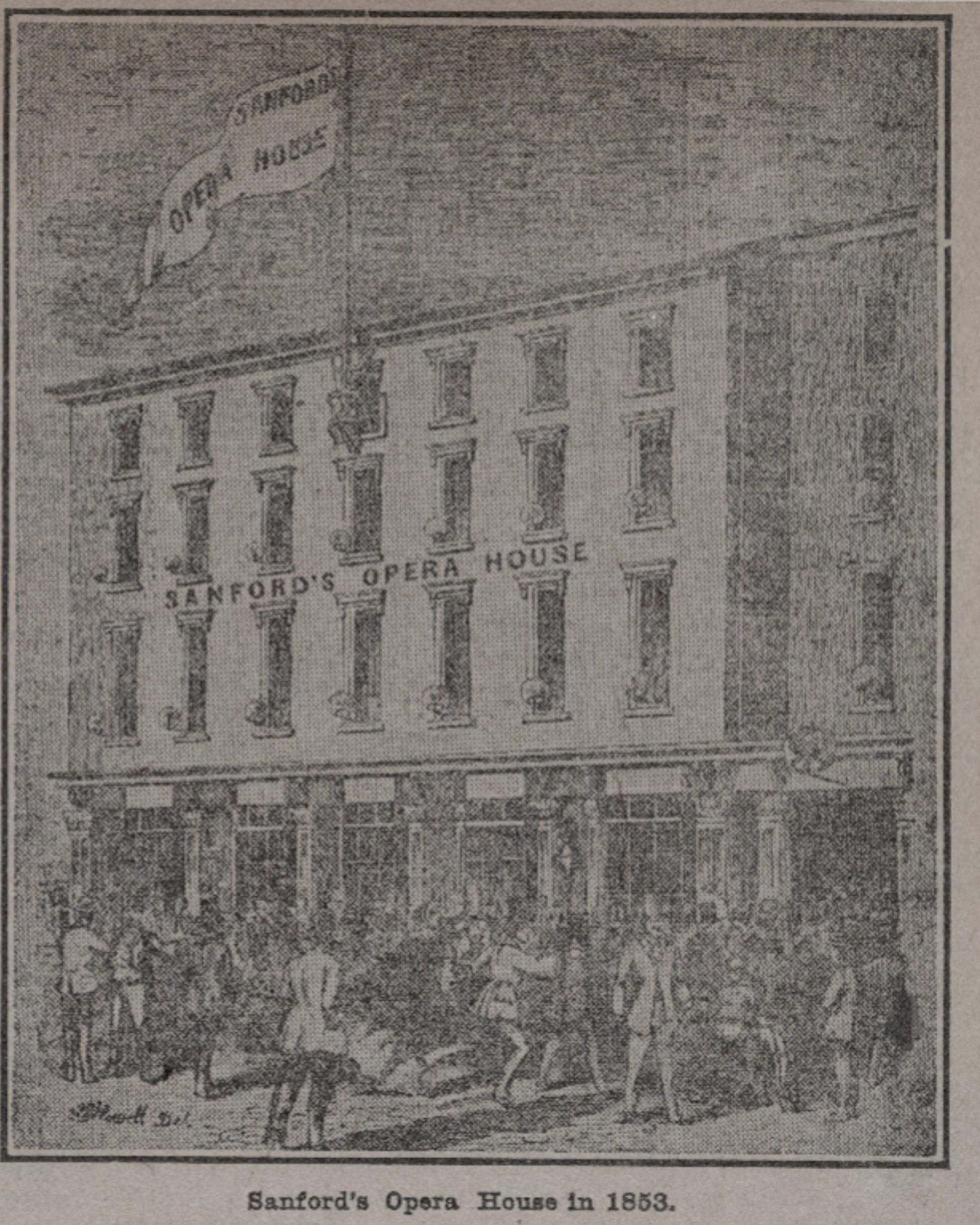 The interior of Sanford's Theater on Arch Street, in a detail from a poster from 1865. This is the only view I have ever found of the building, and it is interesting that  Sanford chose to show an interior view, rather than an exterior. Here's Where the Fun Happens, is the message. We can see that the house had a curving balcony section, a large pit or orchestra section on the main floor, and then two formal boxes on each side of the stage. Though general admission to the show was as little as 25 cents, these boxes could run up to five dollars!

Interestingly, we can note that the show Sanford was presenting, "Paddy's Wedding" seems to have had an Irish theme, and there may have been no blackface performers in this particular show at all. 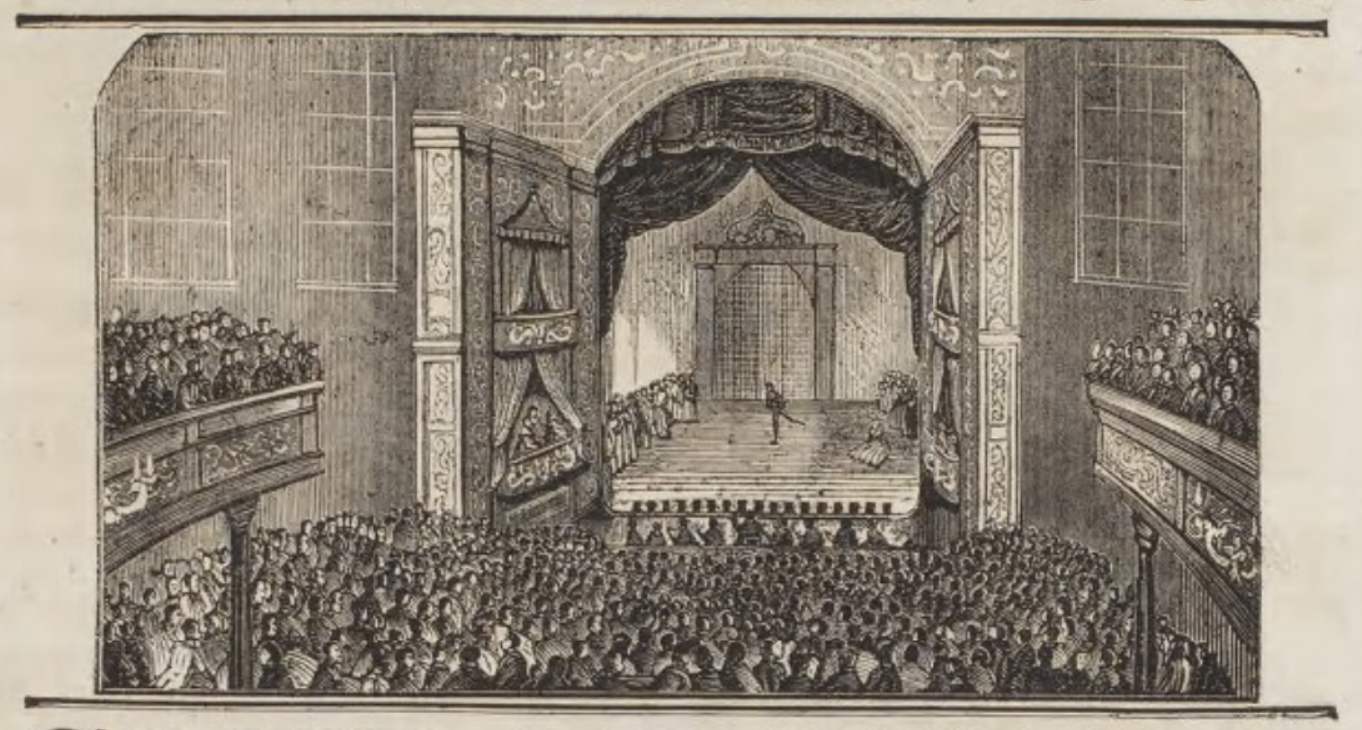 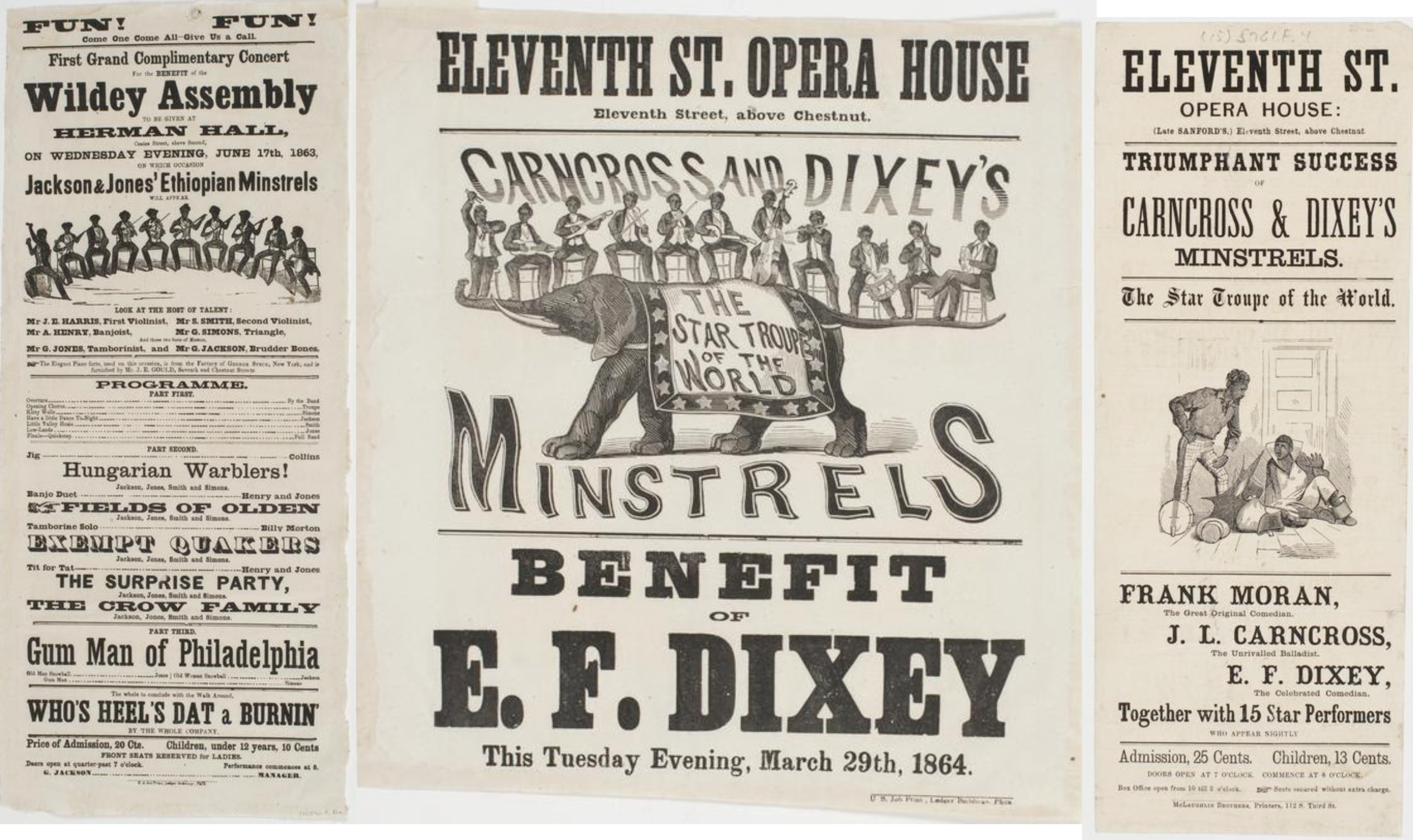 Above are a series of some of the many, many other posters for Philadelphia minstrel shows and minstrel troupes in the collection of local libraries. These particulars ones are at the Library Company of Philadelphia, and can be viewed on their digital archives.

Below, advertisement for Carncross' Minstrels at the Eleventh Street Opera House in Philadelphia from the 1870s. Sickly, unhappy and thin people go in the front of the theater to see a show. When they exit, they  are healed, joyful, and fat. 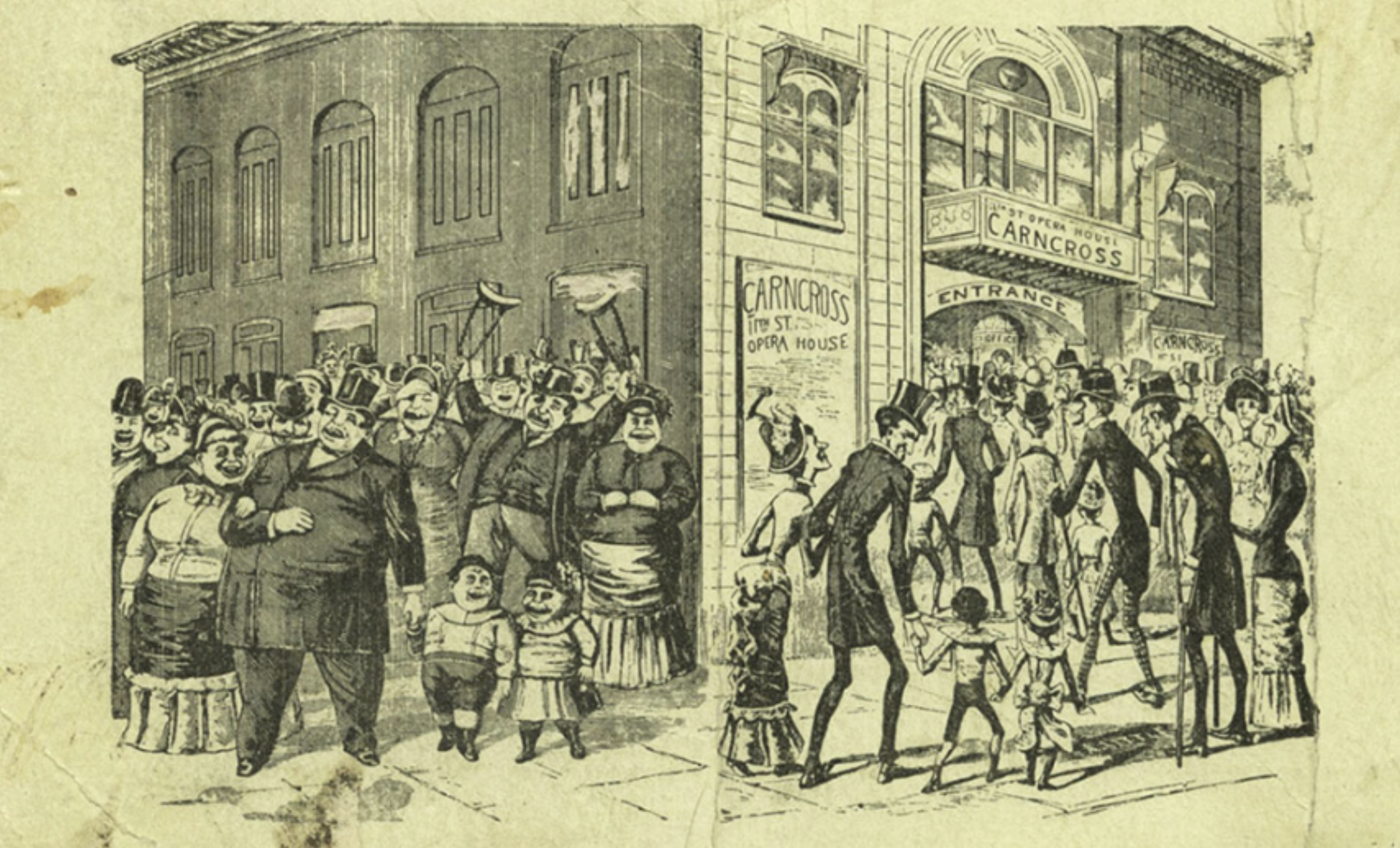 Notice in the Philadelphia Inquirer for Haverly's Colossal Christmas Carnival in December 1880. James A. Bland was part of the enormous company. Note that the text again offers audiences an experience of fun and carefree humor, one that promises relief from any racial anxiety, with just a hint of nostalgia for the ante-bellum South:

"It was the modern slave's saturnalia, the heathen festival rebaptized and christened, the week whose license was a ludicrous mimicry of freedom, with an undertone of sadness like the refrain of a plantation melody." 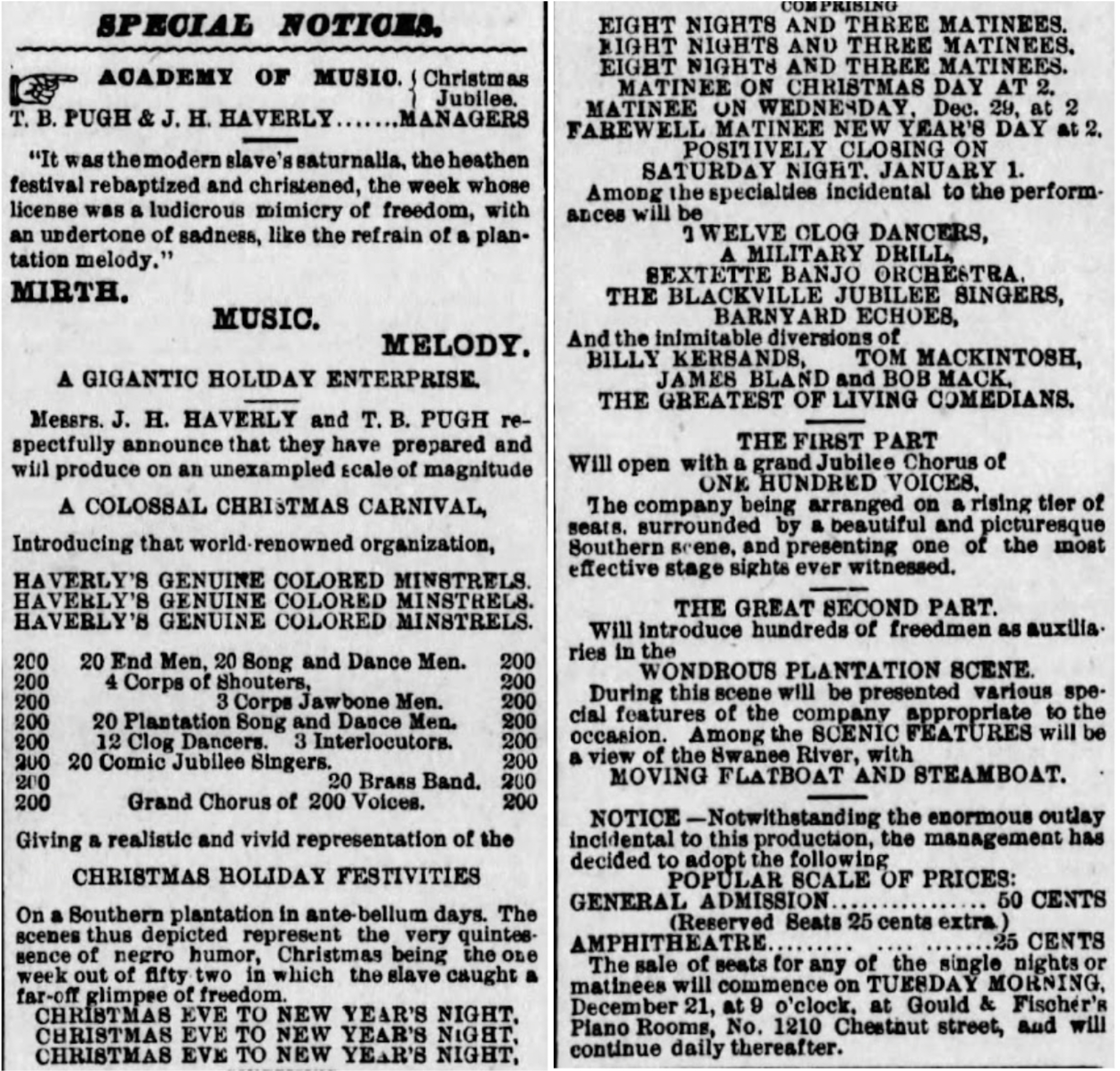 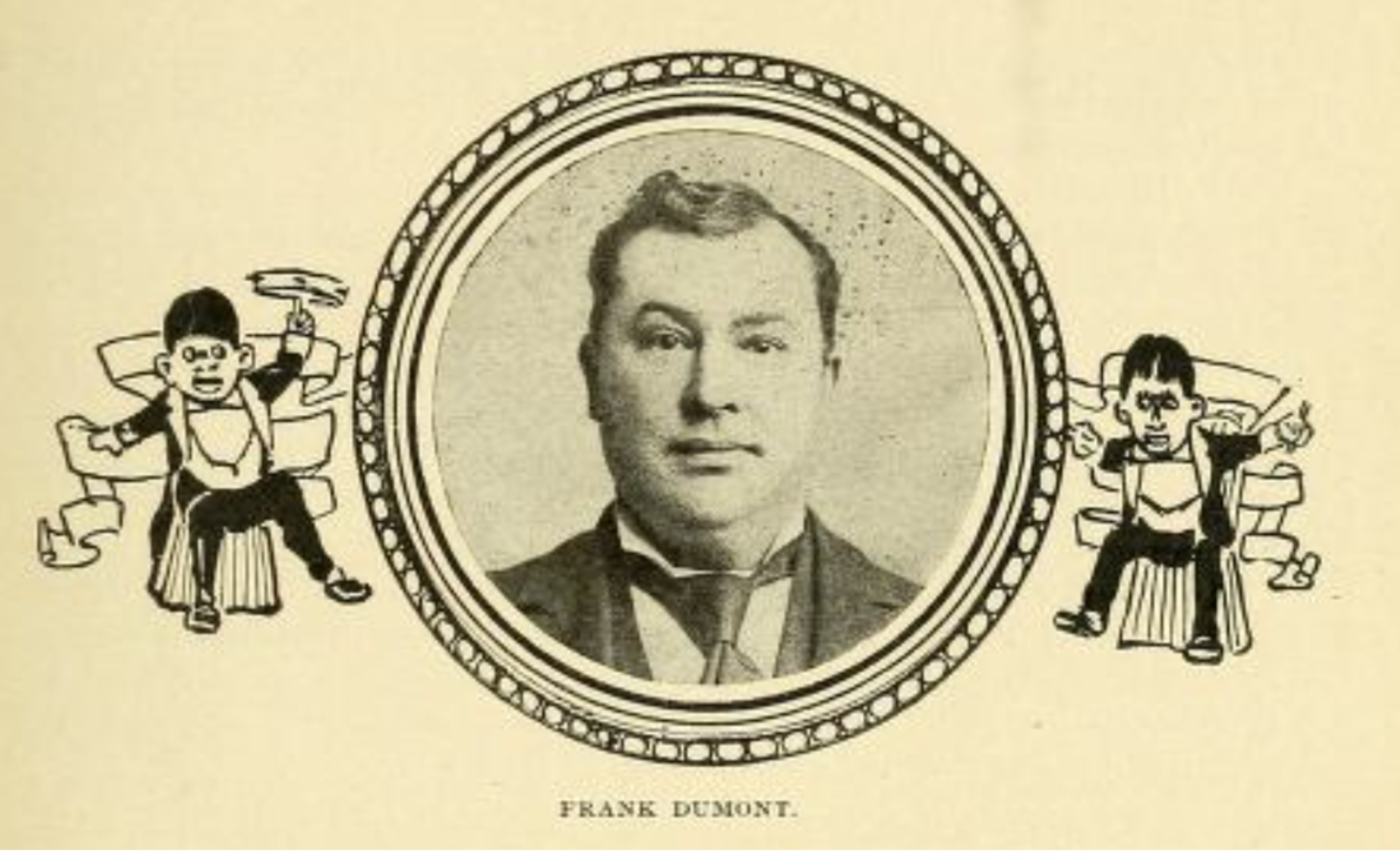 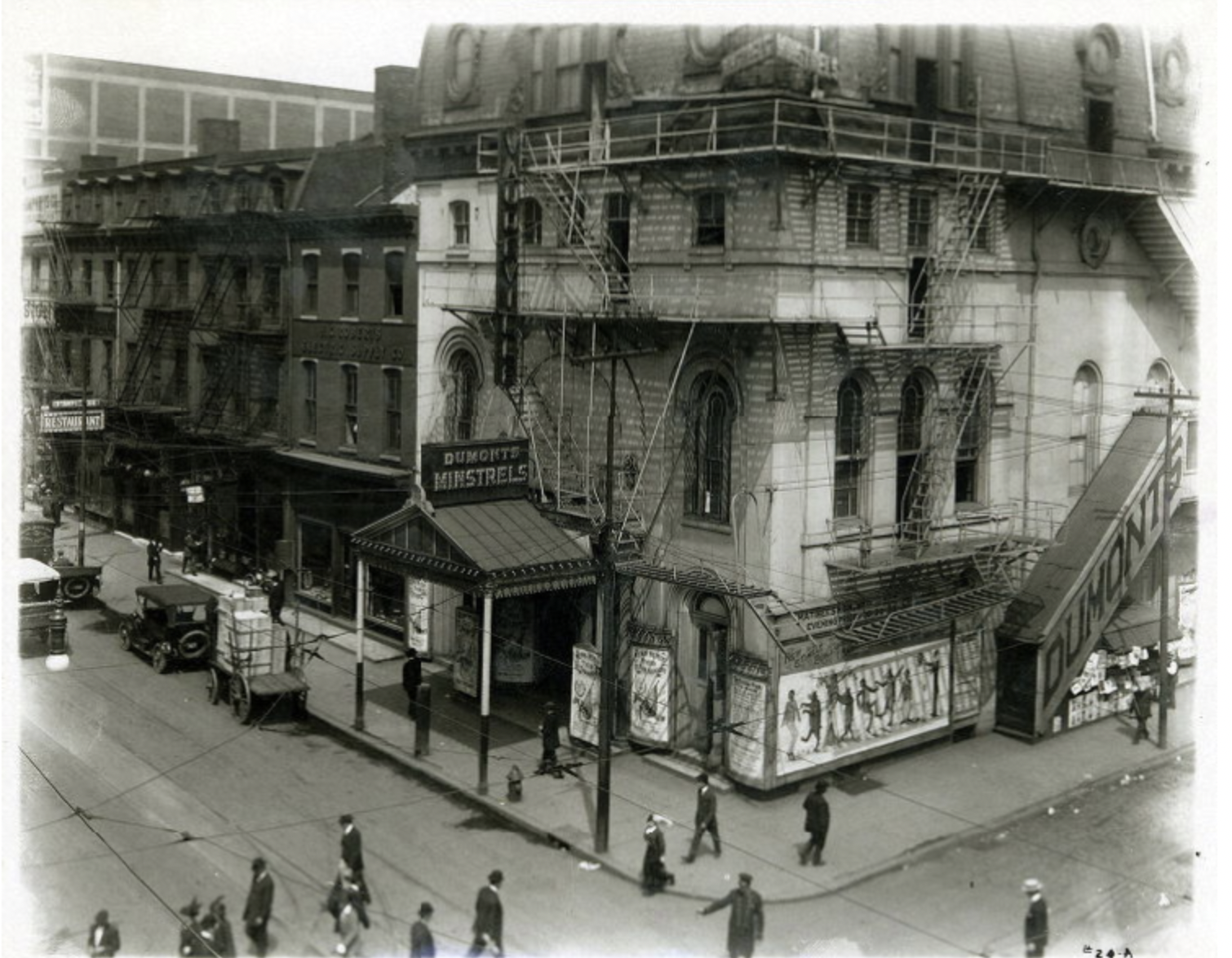 Above, Frank Dumont, in a photo in his book "The Amateur Minstrel Guide and Burnt Cork Encyclopedia." Dumont's Minstrels moved to the corner of 9th and Arch Streets in 1909. Frank Dumont died in the box office there, while overseeing the St. Patrick's Day show on March 17th, 1919. (See the post on our Facebook page about Dumont's death here: https://www.facebook.com/AITHpodcast/posts/300850595437012 )

Why did Philadelphia hold on to minstrel shows so much longer than any other American city? That's a question I haven't quite worked out yet. It may have something to do with the fierce 'defense of boundaries' in Philadelphia's working class neighborhoods. As the "Great Migration" of Black people from the rural South to the urban North reached a peak in the years from 1910-1930, there were many violent attacks on Black neighborhoods in Philadelphia, as well as the everyday attempts to limit their political and social power. The psychological appeal of minstrel shows, both in theaters and in the annual Mummers Parade, must have been part of that.

By the early 20th Century, as we mention in the podcast, African American participation in minstrel shows had markedly decreased. In the 19th Century, it was largely the province of Black men from Northern cities. But by the early 20th Centuries, as Jazz music and even Broadway musicals and movies began to feature Black performance, Northern cities now had different opportunities for Black actors, composers, and musicians. In the years before the Second World War, one would increasingly find Black minstrel shows only as part of the entertainment landscape of the rural South. That takes the subject far beyond our purview. If you're interested in learning more, please see some of the sources we've listed in our Bibliography.

Below, James A. Bland, who for a brief time performed with Dumont's Minstrels, and may have joined in a minstrel band in the Mummers Parade, playing his own song "Oh Dem Golden Slippers" - and his final resting place in Bala Cynwyd, PA.

NOTE: There are quite a few items below that pertain solely to Philadelphia and minstrel shows, and some that cover the topic more broadly. Some do both! I am most particularly grateful for the work of Professor Jenna M. Gibbs, and her 2014 study Performing in the Temple of Liberty. We have previously cited this book in other blog entries, but it was particularly useful here. Dr. Gibbs' excellent work really places Philadelphia squarely in the context of the trans-Atlantic world of English speaking theater before the Civil War, both in terms of high and popular culture. It’s essential reading for understanding the political and artistic milieu which led to the development of minstrel shows. There is, of course, Christian DuComb’s Haunted City, which I discussed in depth in a previous blog post.

I am also grateful for other important works about the history of minstrel shows, like Eric Lott’s Love and Theft, and of course there is the work of Robert Toll in his book Blacking Up, as well as Dale Cockrell’s Demons of Disorder. I highly recommend these in particular to anyone wishing to study the general subject more deeply than we can possibly do here in this episode.

Lane, Roger, William Dorsey's Philadelphia & Ours: On the Past and Future of the Black City in America, Oxford University Press, 1991, pp. 20-31.

"Buffalo Gals: About The Song," on Ballad of America website, https://balladofamerica.org/buffalo-gals/

"THE REVIVAL OF MINSTREL SHOWS IN THE 1920S AND BEYOND presented by Tim Brooks" Video on YouTube:  https://www.youtube.com/watch?v=R6J3KXXKF2A