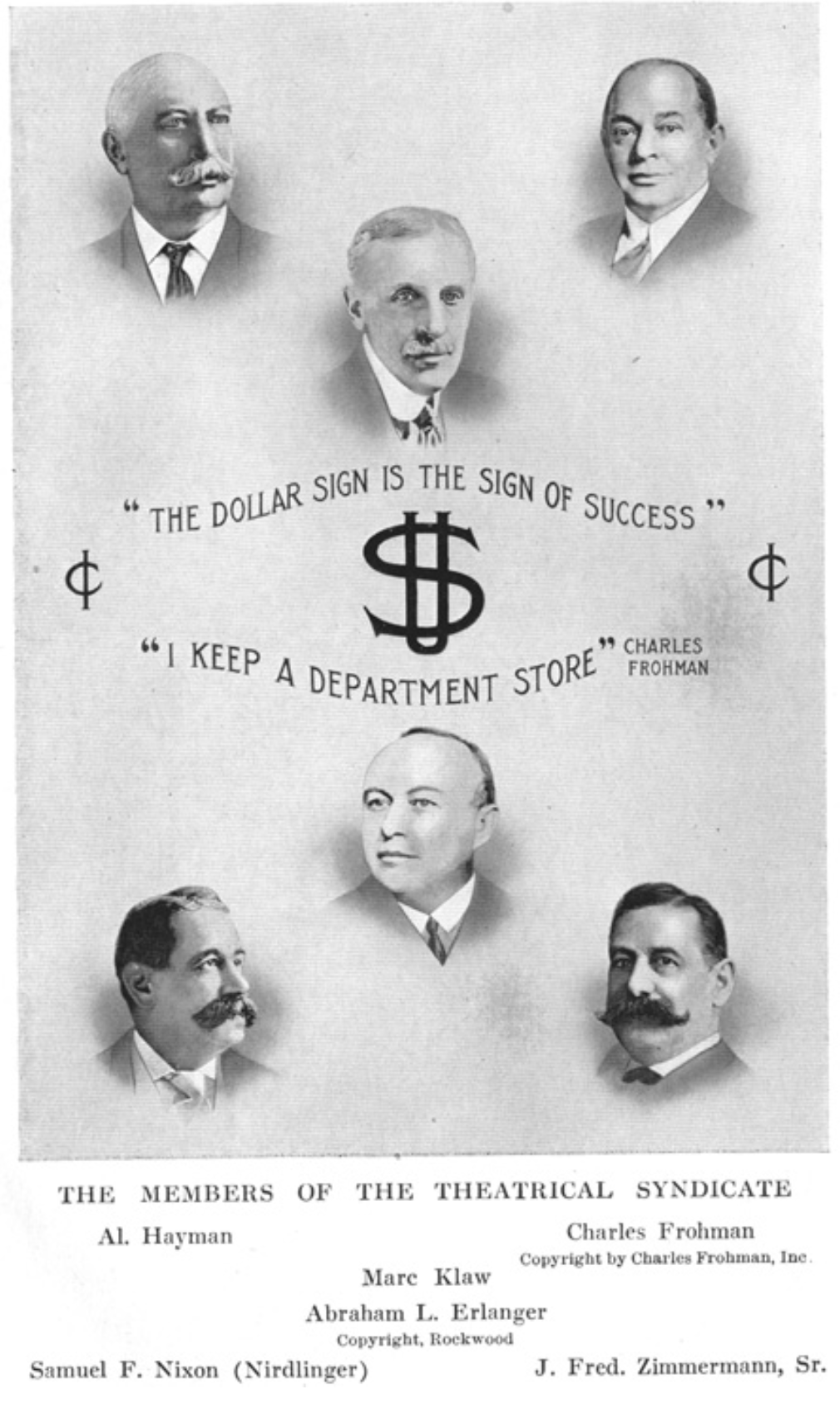 Above, a contemporary photo montage of the six principal members of The Theatrical Syndicate. Philadelphia producers Samuel F. Nixon (Nirdlinger) and J. Fred Zimmerman - and their mustaches - can be seen at the bottom. 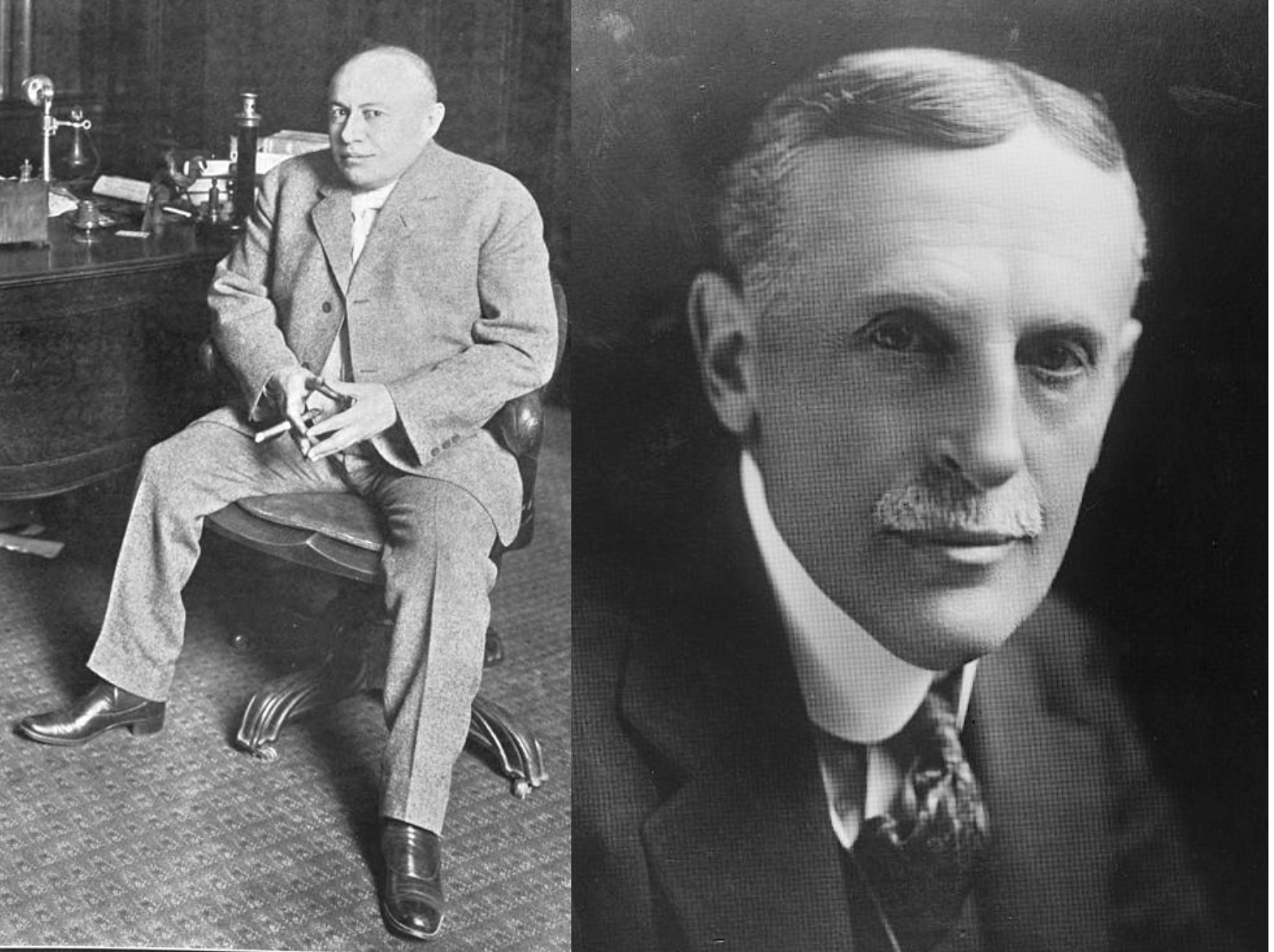 Above, Abraham Lincoln Erlanger (1859-1930) and Marcus Alonzo Klaw (1858-1936), the two leading members of The Syndicate. As you can see from their photos, they intended to project the image of formidable men of business, and by all accounts, they were. Erlanger even had mastered the tented-hands pose required of all supervillains.

A few years after the events we detail in these episodes, The Syndicate would eventually lose its grip on American showbiz. In the long run, they had to cede some ground to others, especially after the rise of the Shubert Brothers, and a revolt by New England independent theater owners. But they still kept a firm hold on a large share the Philadelphia market for many years afterwards, as we shall discuss in future episodes. And of course the Erlanger Theatre on Market St., built in 1927, would be named after the lead partner.

But even before 1905, when Thomas Dixon formed his production company and entered into an agreement with The Syndicate (to tour The Clansman throughout all their theaters in the American South), there was a massive lawsuit making its way through the New York courts. The Shuberts, along with the producer David Belasco, were attempting to sue the powerful sextet, and during the discovery proceedings a great deal of The Syndicate's financial information was brought forward. I share with you some of a long article in the Richmond Times-Dispatch of April 13, which details the enormous financial reach of The Syndicate, as well as the involvement of Nixon and Zimmerman.

One of the most amazing details is what a sweet deal the two Philadelphians got in the arrangement. Just because of their stranglehold on the theaters of Philadelphia, Baltimore and Pittsburgh, they received 25 percent of the entire profits of The Syndicate. True, they had to fork over 33 1/3 - 50% of their own profits from their Philadelphia theaters, but keep reading to the bottom of this post, and you'll see they made out just fine from the arrangement . . .

Even though the power of the Syndicate was diminished by the 1910's, Samuel Nixon (aka Nirdlinger) was still holding on to quite a fortune when he passed away in 1918, as we can see from his huge stone obelisk memorial in Philadelphia's Mount Sinai Cemetery. At his funeral, his honorary pallbearers included almost all the most powerful theatrical producers in the country (including both Erlanger and Klaw, as well as E.F. Albee, Florenz Ziegfeld, and George M. Cohan). However, The Syndicate's great rivals, David Belasco, Lee Shubert, and Jacob Shubert, were evidently NOT invited. 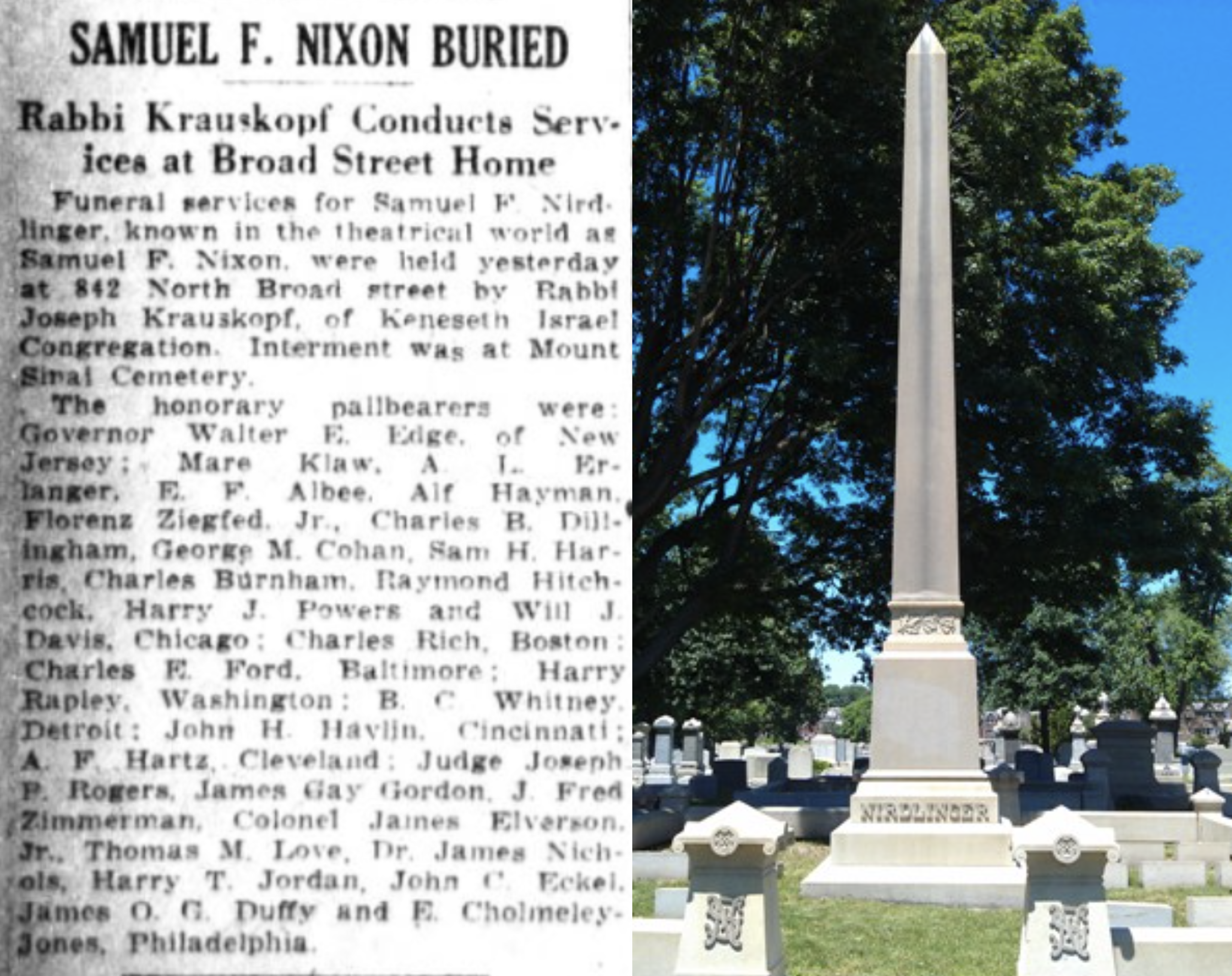 J. Fred Zimmerman passed away in 1925, and he was buried in Laurel Hill Cemetery. Being somewhat less parsimonious than his former partner Nirdlinger, he had prepaid for an even more elaborate memorial - a huge family mausoleum, along the prime stretch of real estate known as "Millionaire's Row." His estate was left in trust to his two sons, and after their deaths his fortune went to the Actor's Fund and the Forrest Home for Retired Actors, which he had supported throughout his life.

But he took his mustache to the grave with him. 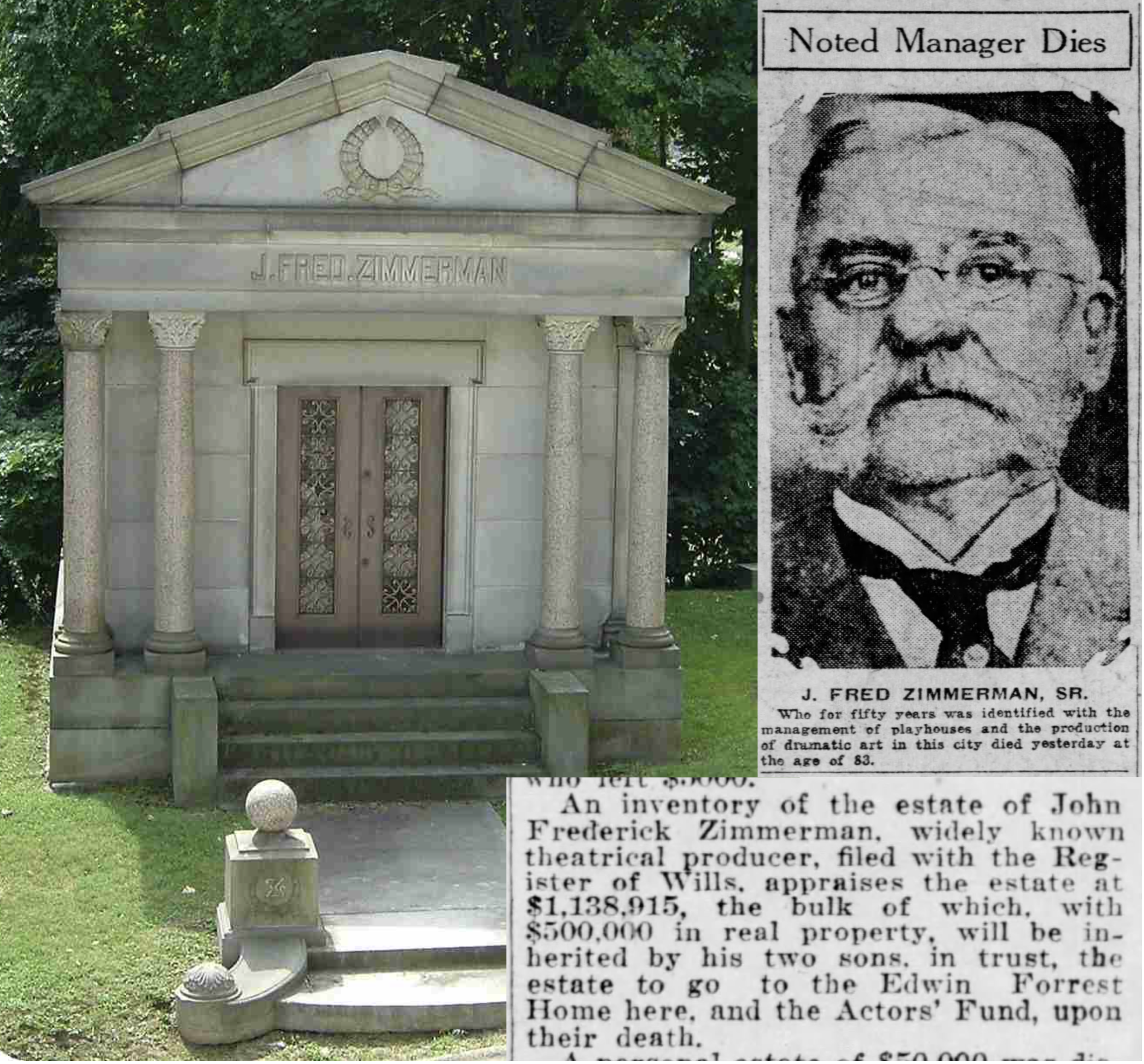 Lehr, Dick, The Birth of a Nation: How a Legendary Filmmaker and a Crusading Editor Reignited America’s Civil War. Public Affairs, New York, 2014.

Slide, Anthony, American Racist: The Life and Films of Thomas Dixon, The University Press of Kentucky, 2004.

Turney, Wayne, A Glimpse of Theater History (website), “The Theatrical Syndicate.” (Accessed via the Wayback Machine, 2022.)