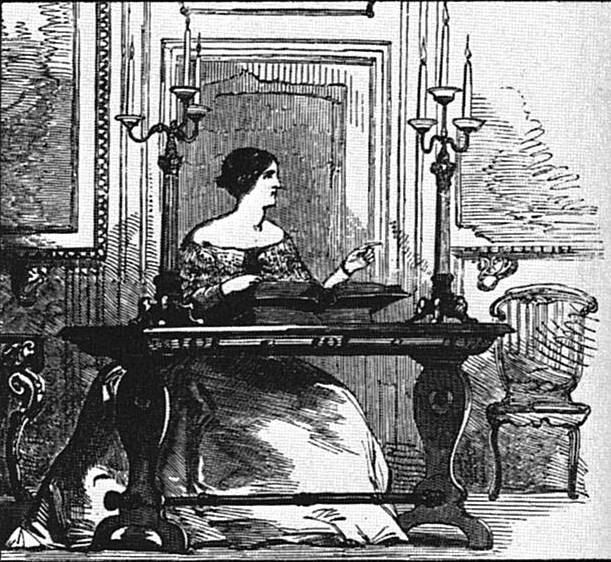 As we detail in the podcast episode, becoming a public 'reader' of Shakespeare's plays gave Fanny both an independent income and a new lease on life. Between 1848 and 1868 she gave hundreds and hundreds of similar performances in England and America. "A wandering rhapsodist", she called herself.

Below, a drawing of the first Pierce Butler, the patriarch of the Butler clan in America.  I call him "first" for our purposes - there were others with that name in his family back in Ireland. He is shown next to a watercolor painting of the mansion he built on the corner of 8th and Chestnut Streets in Philadelphia. It had a large walled garden next to it, with tall and luxuriant trees - a feature that was quite a rarity for a Philadelphia townhouse so close to the center of the city, another indication of his wealth. The house was the home for many in the Butler family after the old man died, including Fanny and Pierce, briefly, when they were first married. It was torn down in the 1850s.

Below, by the same artist as the previous image, a watercolor of Butler Place in Germantown, along with a drawing made of Fanny in the 1830s. Fanny tried to make the old place a happy home, and devoted much of her time to decorating its interior and the landscaping its extensive grounds. But she did have a difficult time relating to many of her neighbors, most of whom were Quakers. Both of the Butler daughters were born here - Sarah in 1835 and Frances in 1838. Motherhood can be stressful, and she already had enough stress in her life, God knows. A painting of her from this period, by Henry Inman, is in the collection of the Brooklyn Museum in New York. The sketch of her two girls is from the Furness Theatrical Collection of the University of Pennsylvania. 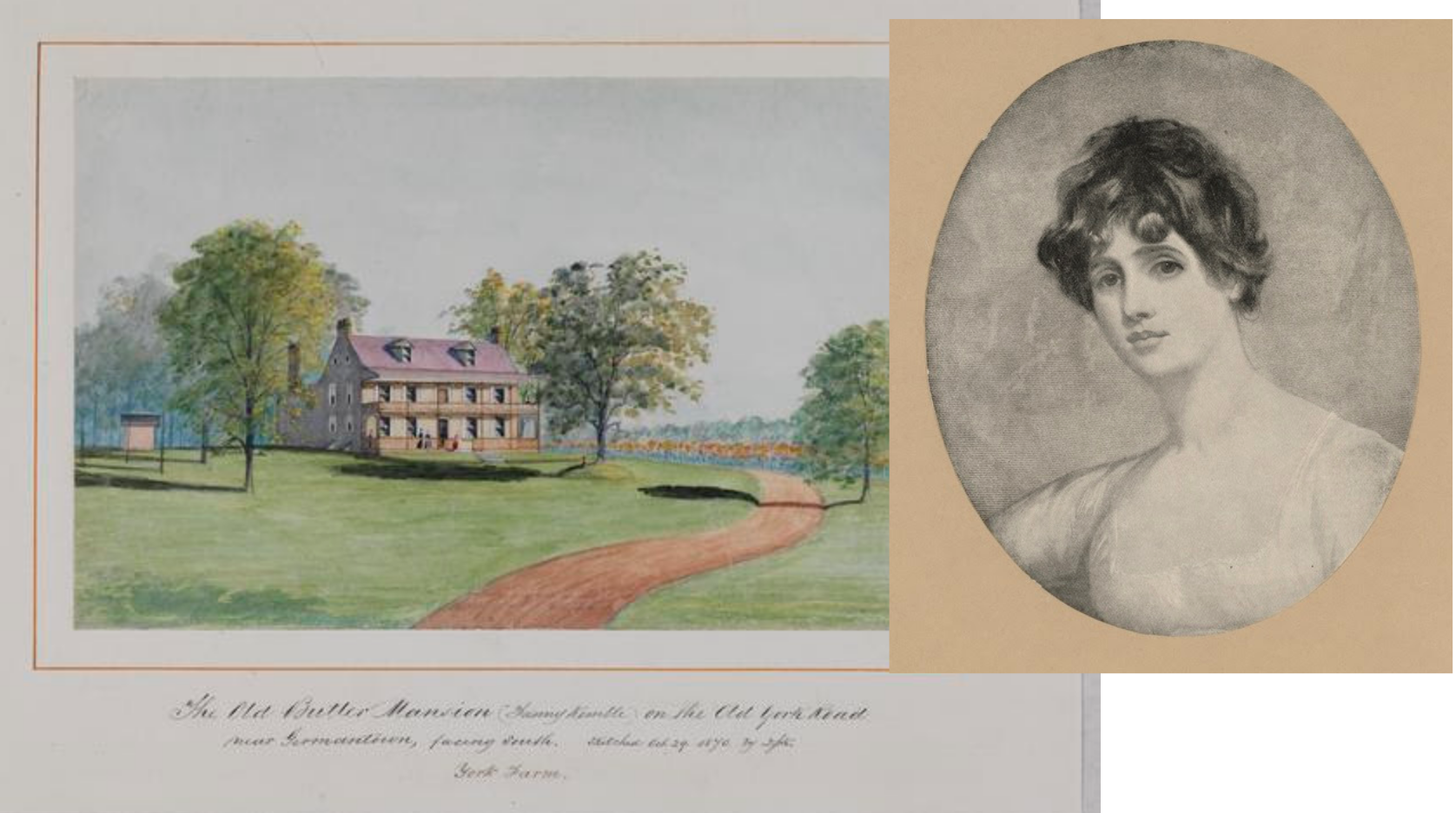 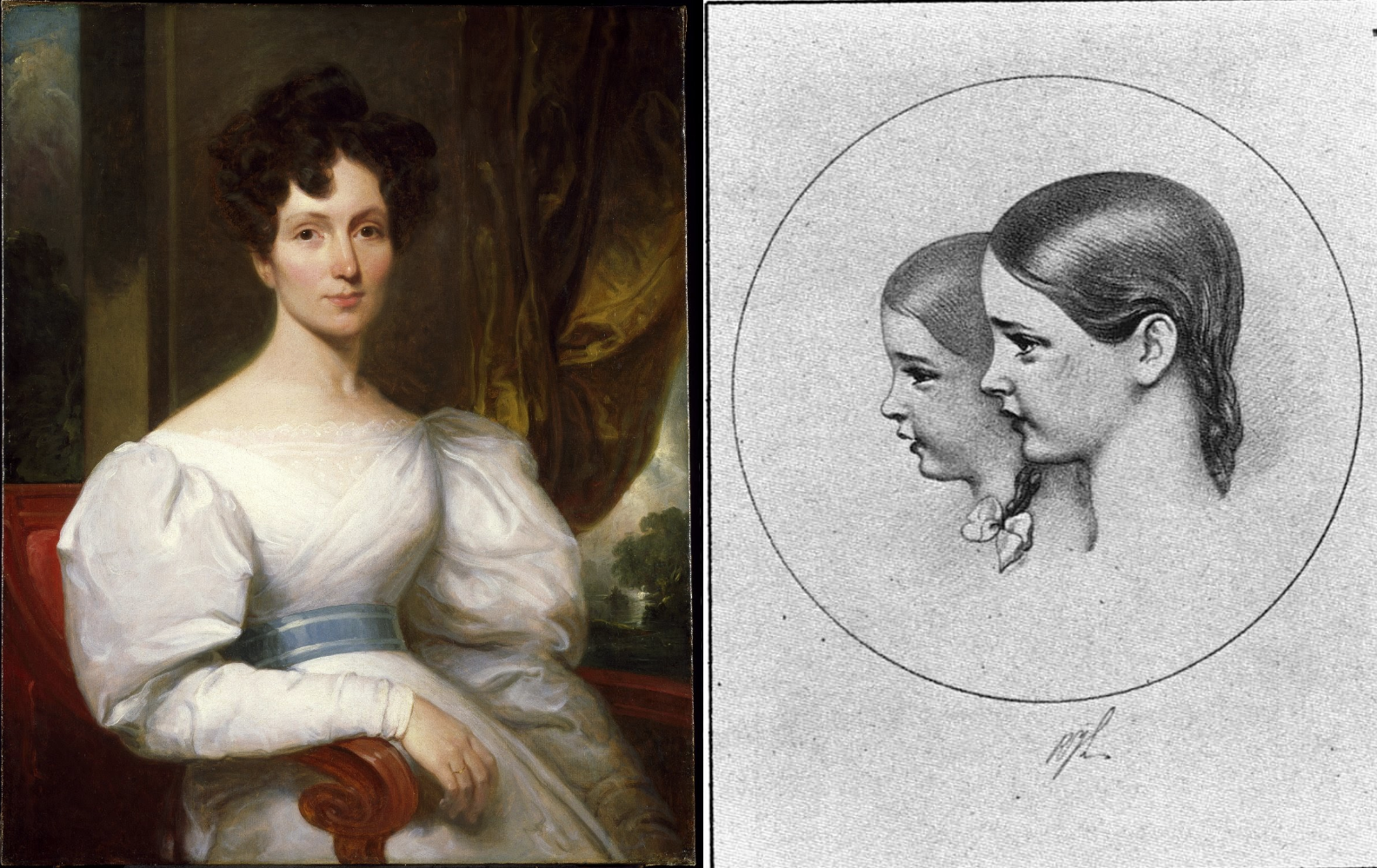 Above, the most infamous Butler house, the one at the plantation on Butler Island in Georgia. This is a photograph taken many years later - the property remained in the control of the Butler and Wister families into the 20th Century. Inset is a photograph of Pierce from about 1850. Here the family lived for the winter of 1838-1839, and Fanny kept her meticulous journal of the realities of plantation life and slavery in the Antebellum South. It would not be printed until much later, however.

Fanny and Pierce Butler were separated in 1845, and finally divorced a few years later, after much wrangling and delays by Pierce. For much of this period she did not see her daughters at all, and communications with them were sadly infrequent. During this period Fanny briefly returned to the stage, trying to revive public interest by repeating many of the roles that had made her famous fifteen years earlier. She could be seen once again as Isabella in Measure for Measure, all the more aware of the injustice that could be inflicted upon women by powerful men. Printed as part of a popular series of images of British and American actors, note that even here she could not be billed solely by the name Kemble. Technically she was still "Mrs. Butler". Once the divorce became final, she always billed herself as "Mrs. Fanny Kemble". 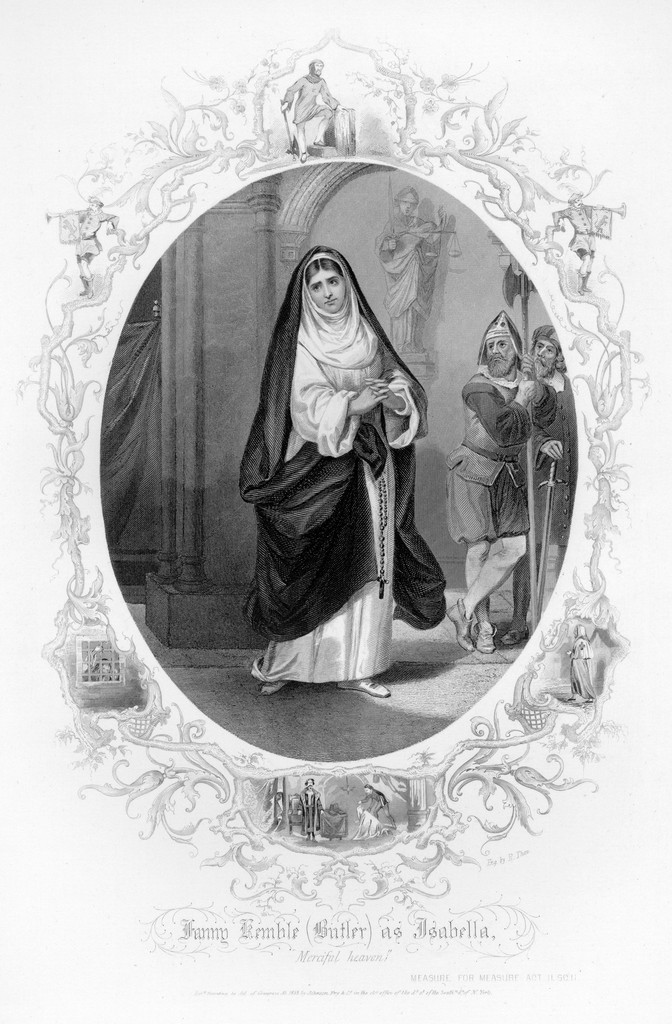 Below is a photograph of Fanny from the 1860s, looking quite Victorian, posed in the manner of her giving a public reading of Shakespeare. She is wearing a proper hat and voluminous skirts - indeed she looks a little like Queen Victoria from about the same period. In fact, Her Majesty the Queen was an occasional member of her audience when Fanny gave public readings in England. 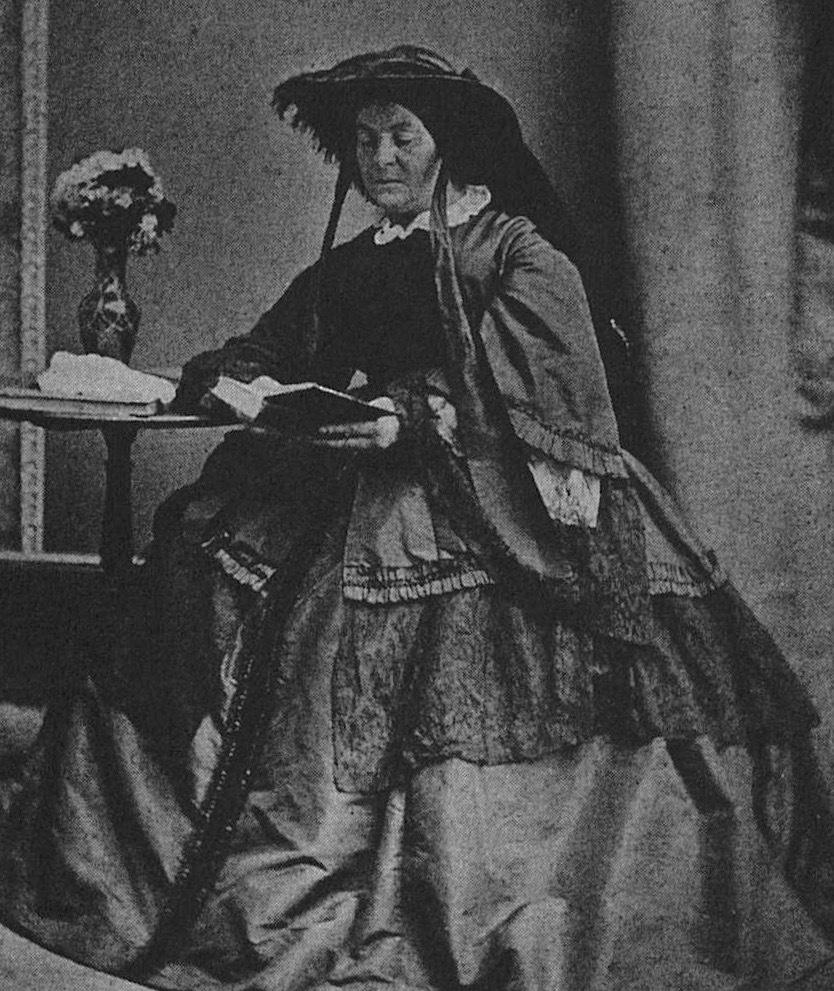 In May 1868,  Mrs. Frances Anne Kemble gave the final series of dramatic readings in the city of Philadelphia, which had been such a challenging home to her over the years. Henry V, The Merry Wives of Windsor, A Midsummer Night's Dream were all in her repertoire, and evidently sales were going so well that she added a performance of Hamlet. Note also that she also read shorter poetic pieces at times, including poems by Wordsworth, Scott, Longfellow and Whittier - all of whom she had met and known over the course of her life. She also liked reading an English translation of Friedrich Schiller's Mary Stuart. 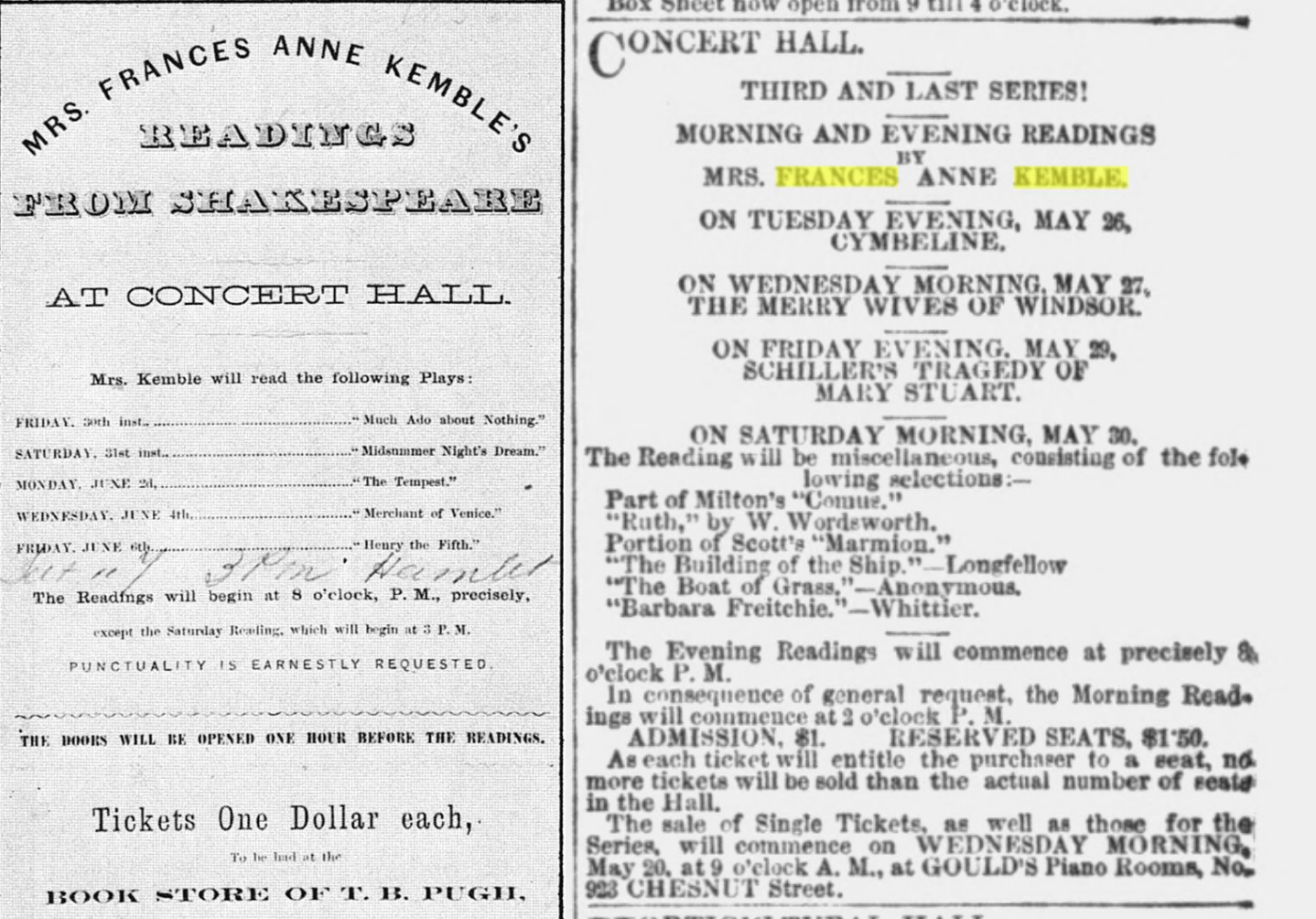 In 1983, the City of Philadelphia and the Fairmount Park Commission installed the bronze plaque at Kemble Park in the Germantown/Olney area. Though I did not mention it in the podcast, you can see that evidently there was some thought given to the fact that Fanny, although worthy of honoring for many reasons, had not actively done much in her lifetime to further the cause of liberation of enslaved people in America, either before the Civil War or during it. But many other people who lived in Philadelphia had. Thus the name "Fanny Kemble Abolitionist Memorial Park". The names of other white Philadelphians whom advocated for slavery's abolition, including Benjamin Franklin, Lucretia Mott, and Charles Wil[l]son Peale, are listed. Also honored  are several prominent African-American Philadelphians of the anti-slavery movement from the 19th Century: Richard Allen, Absalom Jones, James Forten, William Still, Robert Purvis, and James McCrummell. 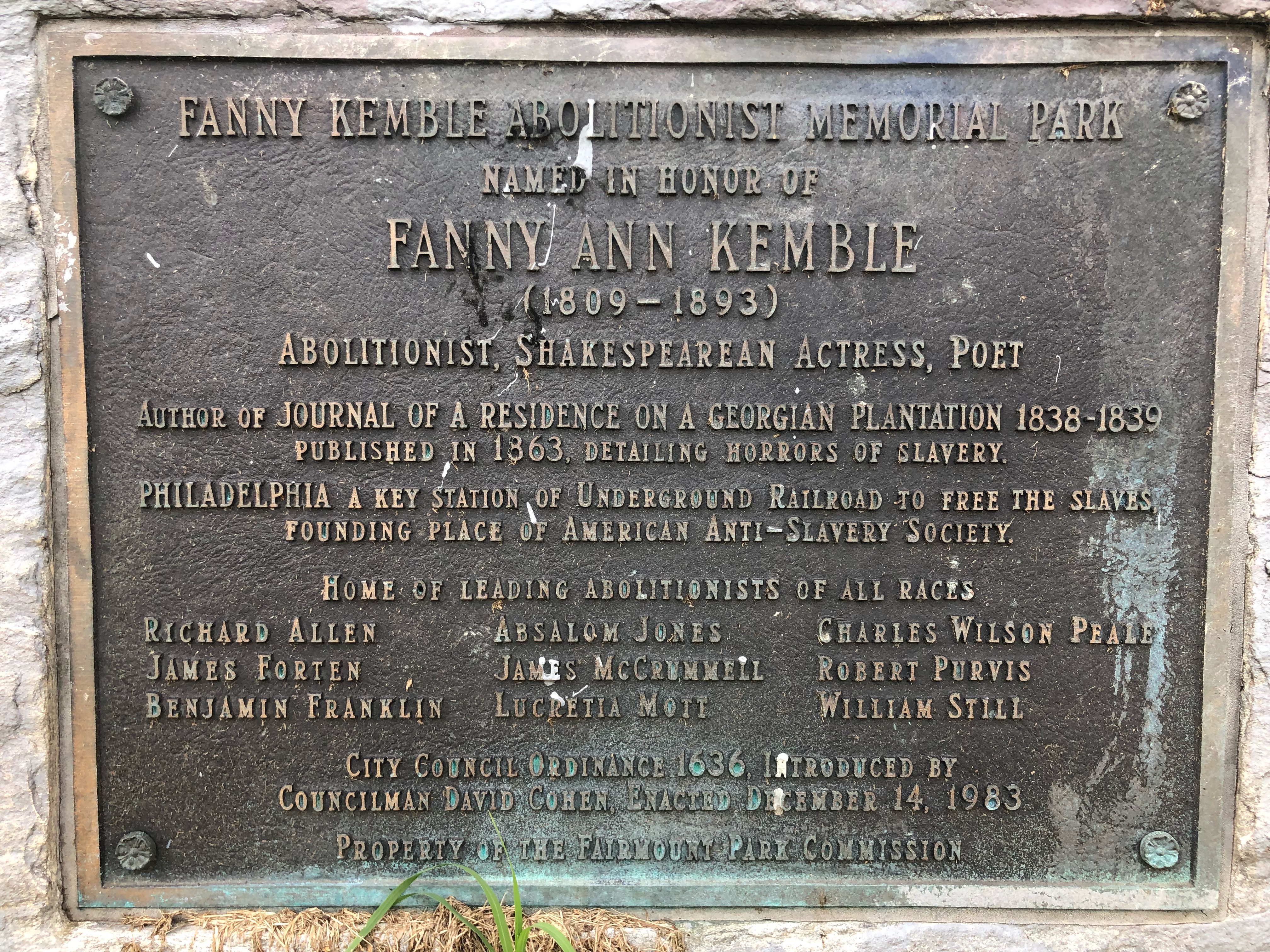 Mannion, Nathan, "The Carlow Man Who Became a US Founding Father (and One of the Biggest Slaveholders), Irish Times, February 12, 2019. https://www.irishtimes.com/life-and-style/abroad/the-carlow-man-who-became-a-us-founding-father-and-one-of-the-biggest-slave-owners-1.3789490