A montage of photographs of Edwin Forrest. First as himself, and then as the title characters in Spartacus, Metamora, and Jack Cade.


Below: Three paintings of Forrest as Metamora, from different stages of his career. The first (artist unknown) is from the 1830s. The second image was found as an illustration in Charles Durang's "History of the Philadelphia Stage", and probably dates from the 1840s. And the third is a painting done by Gabriel Harrison in 1872, based upon a photograph of Forrest in the role taken by the photographer Mathew Brady in 1861. 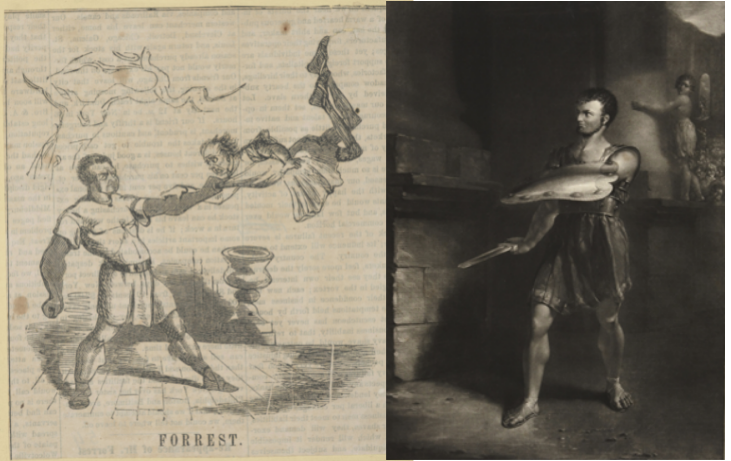 Above, two images of Forrest as Spartacus in Bird's The Gladiator. On the right is an image of Forrest throwing another actor across the stage, which is in the collection of the Libraries of the University of Pennsylvania. To the left is a black and white version of a painting of Forrest as Spartacus, the provenance of which I have yet to discover.


The three playwrights whose works did so much for Edwin Forrest's career, and whom he rewarded so very little.

Left: John Augustus Stone (1801-1834), author of Metamora, the Last of the Wampanoags, in a painting by Philadelphia portraitist Jacob Eichholtz.

Center: Dr. Robert Montgomery Bird (1806-1854), author of The Gladiator, in a portrait by his wife Mary Mayer Bird, ca. 1840. (Collection of The Library Company of Philadelphia).

Right: Robert Taylor Conrad (1810-1858) author of Jack Cade and the Mayor of Philadelphia from 1854 to 1856. (Reprinted in The Literary History of Philadelphia by Ellis Paxson Oberholtzer) 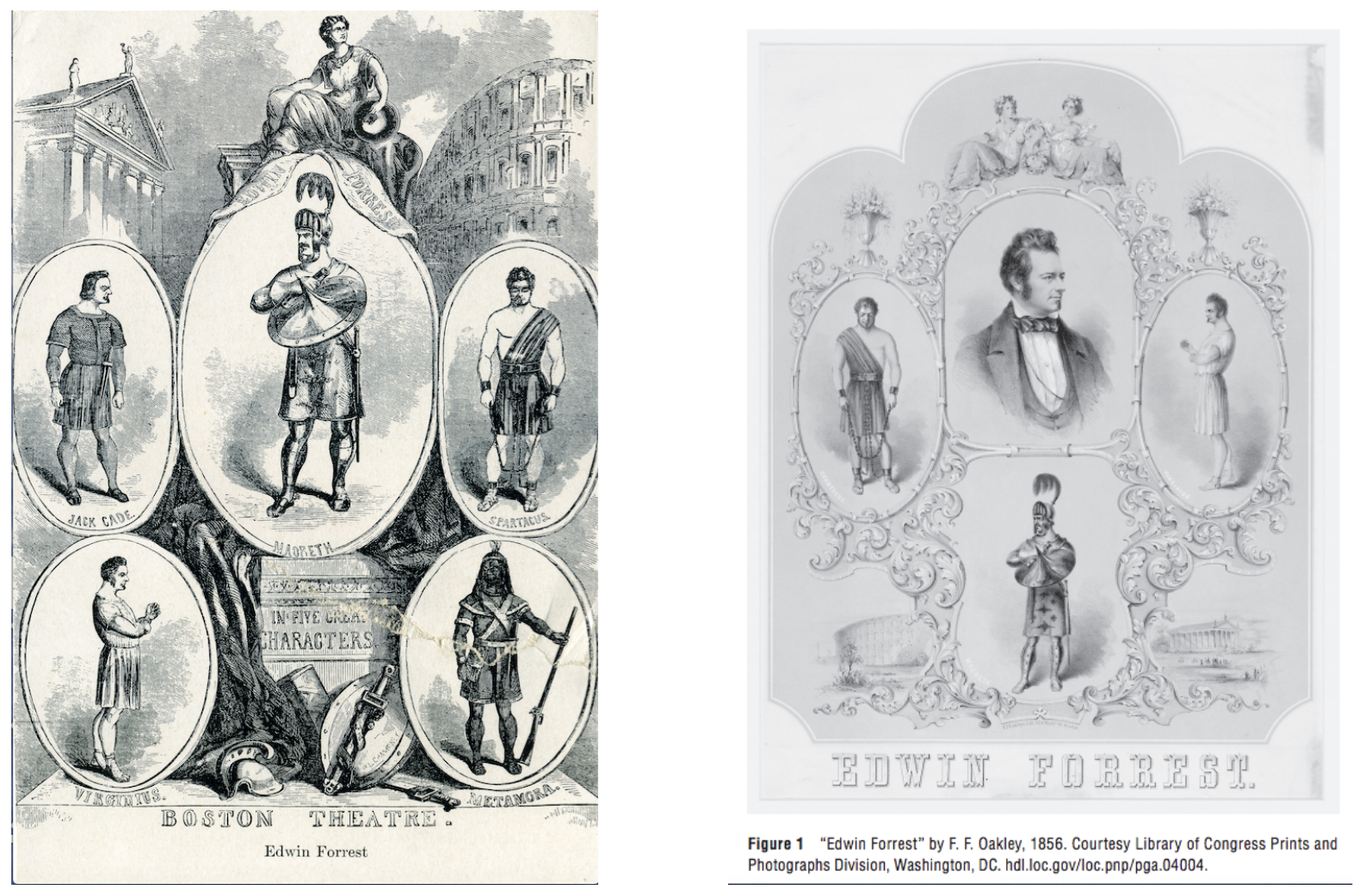 Above: Two posters by the artist F.F. Oakley, to advertise appearances at the Boston Theatre. We can see how the range of Forrest's repertoire was part of his appeal to his fans. The poster on the left is also one of the rare drawings made of Forrest as Jack Cade. In fact, the photograph of Forrest as Jack Cade in the heading to this blog post is the only other image I've been able to find so far.

We leave out so much about Forrest's scandalous divorce from his wife Catharine Norton Sinclair in our podcast's account of his life, I know. Our old friend Mike Leuger of the Theatre History Podcast wrote a great account of it! Link is here: https://www.theawl.com/2017/08/the-penny-paper-sex-scandal/

Forrest often expressed frustration that some of his best performances could not be photographed, minute by minute, to show all the changes and attitudes he went through during the course of the evening. In the year 1861 Forrest made a concerted effort to memorialize all the roles he played. He engaged the photographer Mathew Brady to take pictures of him as Lear, Othello, Hamlet, Cade, Metamora . . and of course, Spartacus in The Gladiator. Not looking too shabby, for a guy in his mid-fifties! 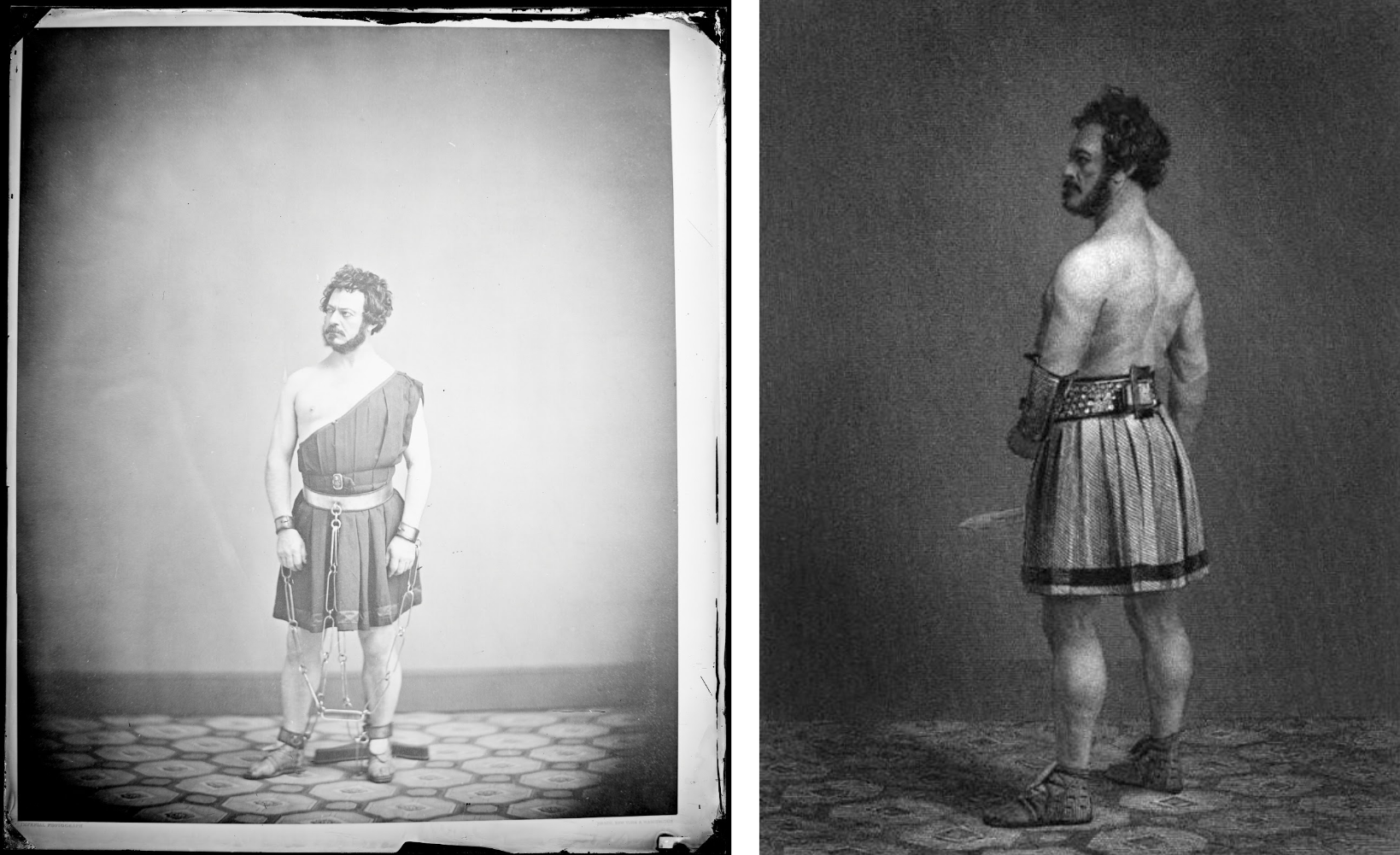 Harrison, Gabriel, Edwin Forrest, the actor and the man: Critical and Reminiscent, Brooklyn Eagle Printing Department, 1889. (A limited edition book, originally dedicated to the residents and managers of the Forrest Home for Actors. Digitized 2009 and available via The Internet Database.)

Whitman, Walt, "The Gladiator - Mr. Forrest - Acting", in The American Stage: Writing on Theater from Washington Irving to Tony Kushner, The Library of America, 2010, pp. 44-47.

Wood, William B., Personal Recollections of the Stage, Embracing Notices of Actors, Authors, and Auditors During a Period of Forty Years. Philadelphia, 1855, pp. 250-324. (Digitized 2008 and available via Google Books.)