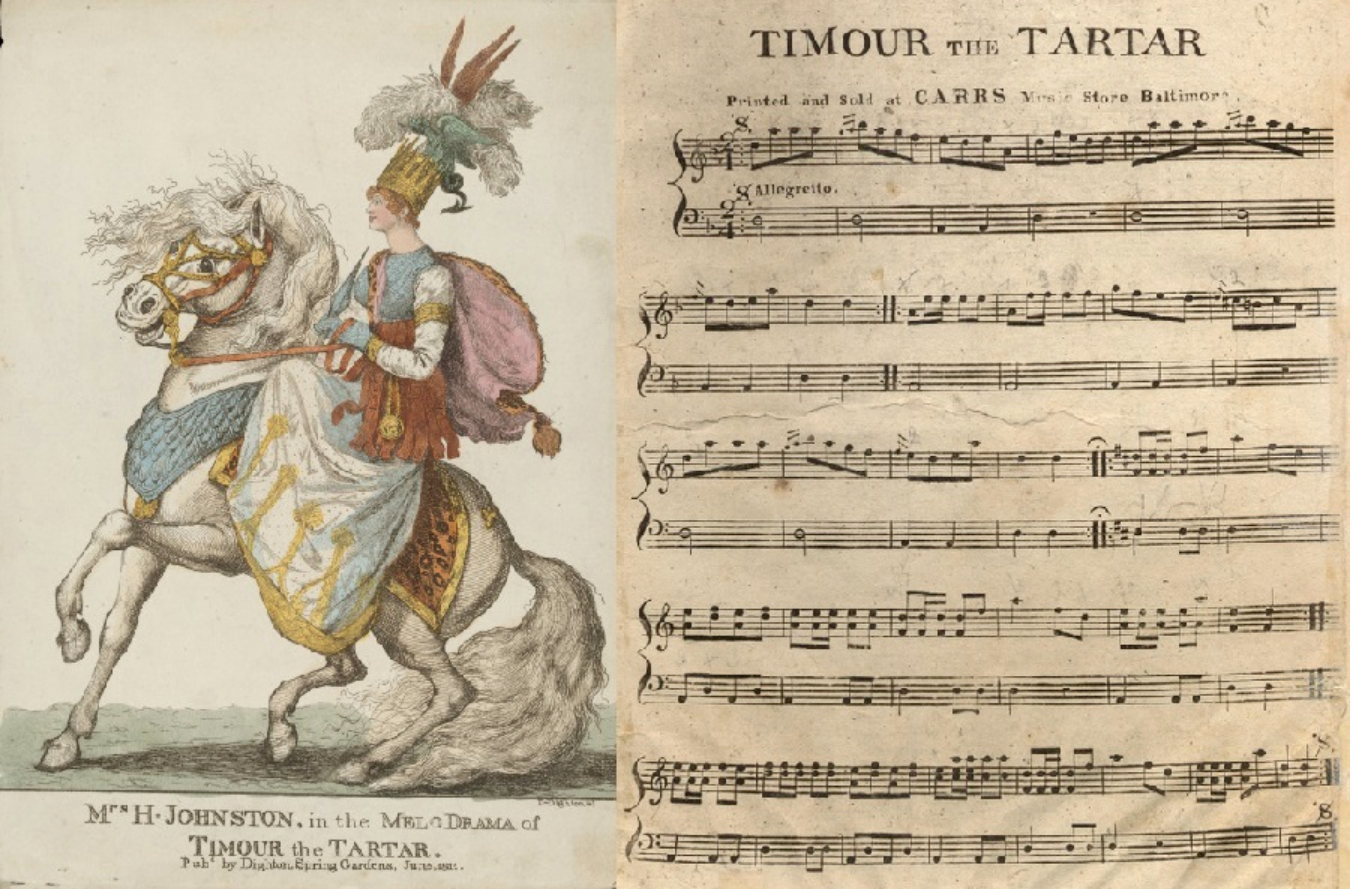 Above, a hand-colored etching from 1811 by Denis Dighton. It depicts "Mrs. H. Johnson" (Nanette Johnson, née Parker) as 'Zorilda' in the melodrama of Timour the Tartar (Collection of the National Portrait Gallery, London).  Alongside it is some sheet music for a march from the play, published in Baltimore, that might have been sold to theater patrons - though it's not clear for which production. The hippodrama of Timour the Tartar was frequently performed, by many theater companies, during the first half of the 19th century.

This spectacular drama, written expressly to be performed with horses by the playwright Matthew ("Monk") Lewis, was originally performed at London's Covent Garden Theater, where Mrs Johnson appeared in it. Although we do not possess any illustration of the Philadelphia production in 1816 staged by James West, it was likely that the character of Zorilda and her horse were costumed in a very similar manner. In Philadelphia the role was performed by Fan Tatnall.

Below: The New Theatre, from Birch's Views of Philadelphia, Third Edition, 1809. It's likely that this image actually dates from 1805, when the facade of the New Theatre theater building was finally finished, under the direction of architect Benjamin Latrobe. Latrobe, who is perhaps best known for his work designing the US Capitol building, was a great advocate of the Greek Revival style, and added a portico with a lovely colonnade to the theater on Chestnut Street. The reason I feel it's probable that this image was made about 1805 or 1806, is because the two alcoves on the second level seem to be empty. Later they would be filled by the statues representing Comedy and Tragedy, by William Rush. I wrote a blog page about these statues on my Patreon page: https://www.patreon.com/posts/52225262 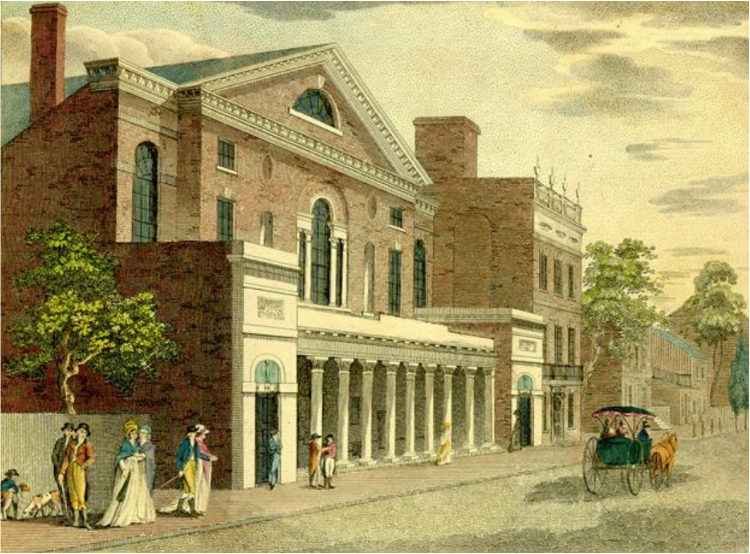 Below, broadside with a crude drawing of the awful fire at the Richmond Theatre, December 26th, 1811, accompanied by a poem by an anonymous author. It was by such broadsides that Philadelphians learned what had happened in Richmond, and why there was a natural unease for months afterwards about attending any American theater for months afterwards. Note that the poem takes a decidedly anti-theatrical turn, in the tenth stanza:

May theatres all be done away.
Thro' all Columbia's shore,
The buildings put to better use,
And plays be seen no more.

As we mention in the podcasts, many sermons were preached in American churches after news of the disaster became generally known, and the long-standing puritanical distrust of theaters was given a seeming confirmation by God's supposed 1judgement on the entire art form. 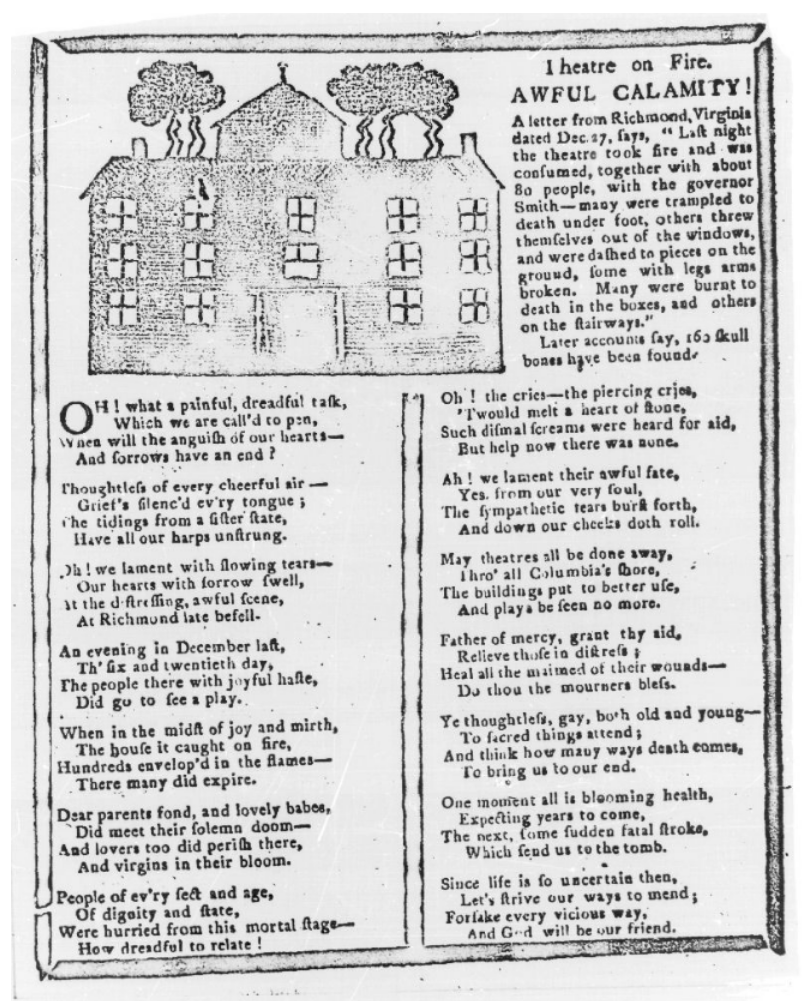 Meanwhile theatrical life continued in Philadelphia, despite the bad news from Virginia. Below are the dueling bills printed in the newspaper Poulson's Daily Advertiser for January 1, 1812. Sheridan's The Rivals  was the first formal play ever performed at the new "Olympick Theatre" (note the extra K there, it's an archaic spelling that was not retained in subsequent ads). The Olympic, as we know, was later to be called the Walnut Street Theatre. As we detail in the episode, on the same day the New Theatre, a few blocks away, was staging their spectacular version of Eyre's The Lady of the Lake. 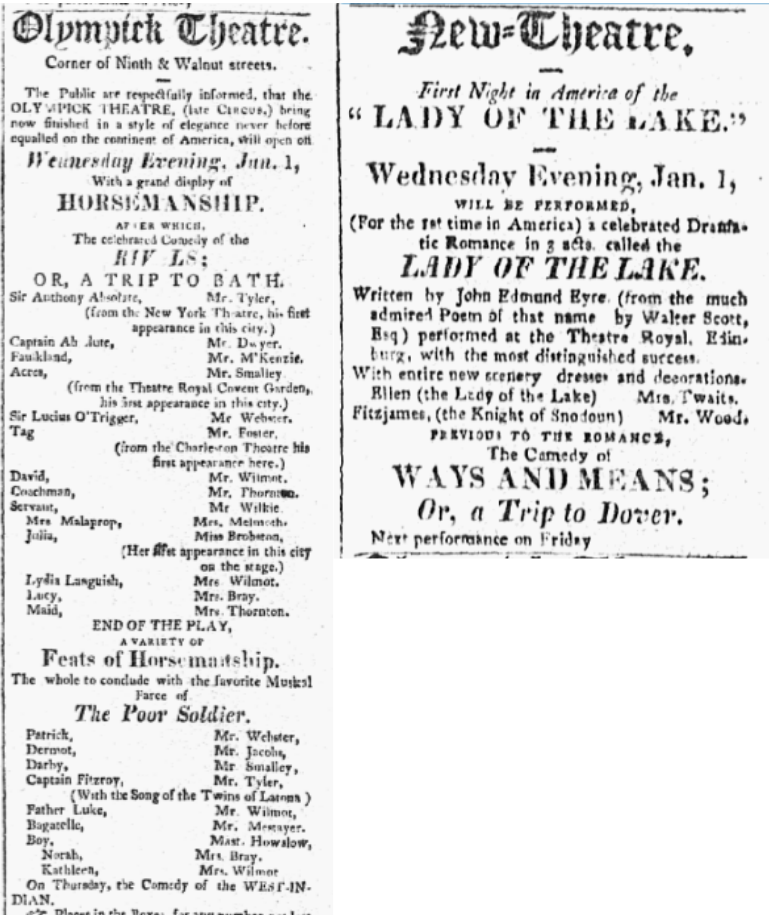 (By the way, there's an odd little factoid that you can find many places online about the first performance of a play at the Walnut Street Theatre - namely, that the Marquis de Lafayette and Thomas Jefferson were in the audience that night. The source of this story seems to be a work of historical fiction about Jean-Baptiste Breschard. There is NO basis in historical truth to this tale, as neither Jefferson nor Lafayette were anywhere near Philadelphia on January 1st, 1812. ) 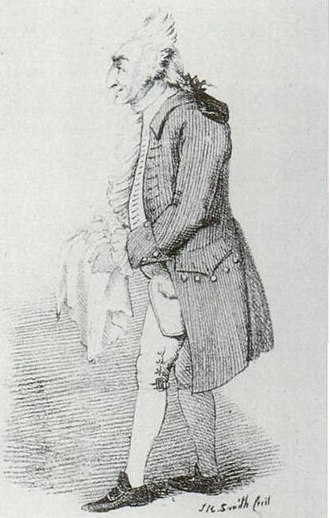 Above: The only picture of the actor William Twaits (1781-1814) that I can find. He is depicted in the role of 'Sir Adam Contest' in a comedy titled The Wedding Day - engraving by John Raphael Smith  (Harvard Theatre Collection). Twaits, who became the leader of the Theatrical Commonwealth, had aspirations to be a leading man, but his short stature (5' 1") and his appearance were perhaps better suited to character roles. He was especially noted for playing "Dr. Pangloss" in the popular comedy The Heir at Law.

Twaits was recruited in England by William Wood to come to Philadelphia in 1803, and he often was in the company of the New Theatre over the next decade, and was quite popular with audiences. Nevertheless, despite marrying into his boss' family (he wed Elizabeth Westray Villiers, the sister of Juliana Westray Wood, see below), he never was able to 'advance' to the leading roles he desired. By 1811 Twaits had joined Alexander Placide's company, and was actually present at the Richmond Theatre fire in December of 1811. By 1812, he was working with the acting company that Pepin and Breschard had assembled to perform plays at the Olympic Theatre on Walnut Street, although his wife Elizabeth stayed at the Chestnut. As we detail in this episode, Twaits helped to found the breakaway Theatrical Commonwealth in 1813. Many reviews note that his breathing was often quite labored when he took on larger roles. I'm going with the diagnosis of asthma for the malady that finally killed him in 1814, although I note other historians have suggested both tuberculosis and alcoholism.

Below: The actress Juliana Westray Wood (1778-1838) in a portrait by Rembrandt Peale. This painting is now in the National Portrait Gallery in Washington DC.

English born, like many stage performers in the early American theater, she had worked in both Boston and New York in her early career. She married the actor and manager William Wood in 1804. She appeared in many leading roles at the Chestnut Street Theatre, the Walnut Street Theatre, and the Arch Street Theatre in Philadelphia.

It took me a while to find out her full name, actually! Because in the theatrical memoirs of the time, actors are only referred to by their last name, I often have a devil of a time learning even their first names. Throughout his entire memoir, her husband only calls her "Mrs. Wood". 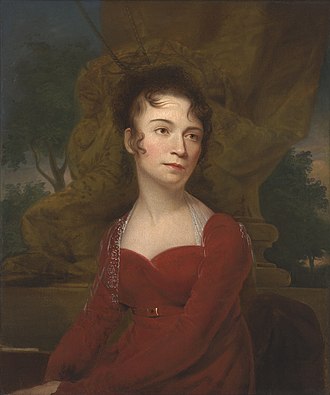 Next is the sheet of paper that Juliana Wood's husband, William Wood, madly scribbled on in frustration in February of 1816, trying to calculate just how much more successful West's Circus was than the New Theatre, as we mention in the podcast episode. It was reprinted in a Philadelphia newspaper article later in the century. 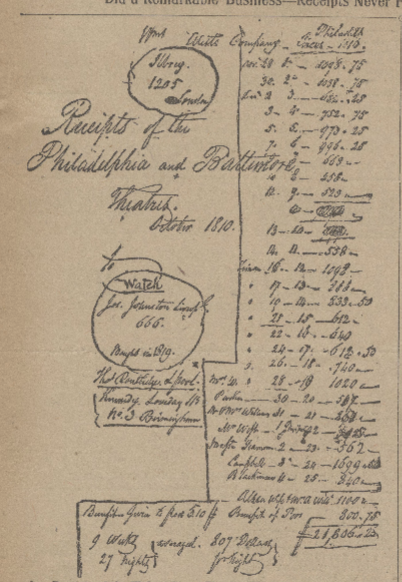 Below is the promised map of early Philadelphia performance spaces! Again, I thank the scholar Anne Beamish, whose work on locating all the pleasure gardens I have poached. Many of the pleasure gardens she lists were built in the decades subsequent to the period we cover in this episode. However, building on Beamish's work, I have added to it the locations of the Chestnut, Walnut, Southwark, and Prune Street Theatres. Note how the built-up portion of the city of Philadelphia did not really extend beyond Broad Street at the time. There was considerable development both north and south of the city along the Delaware River, but that is not shown here. 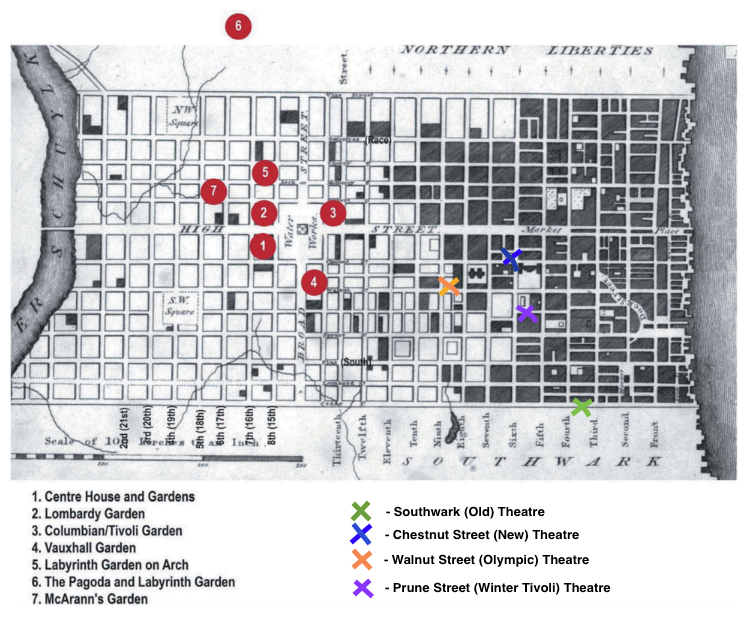 The only surviving contemporary drawing of the Vauxhall Gardens pavilion, which was destroyed in the riot and fire of 1819. You can see both the fence that was built to keep non-paying people from seeing the show (and that was torn down during the incident) as well as a hot air balloon inflating in the interior of the garden. Below the image is a newspaper advertisement for the evening's entertainment the night of the riot. 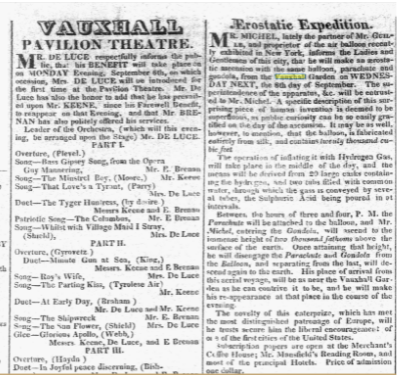 Finally, the final theatrical bill ever for the first Chestnut Street Theatre. After this benefit performance for the Treasurer (essentially, the box office manager), Mr. Pullen, Warren and Wood took the rest of the company down to Baltimore. There they learned that their beloved theater back in Philadelphia had burned down. 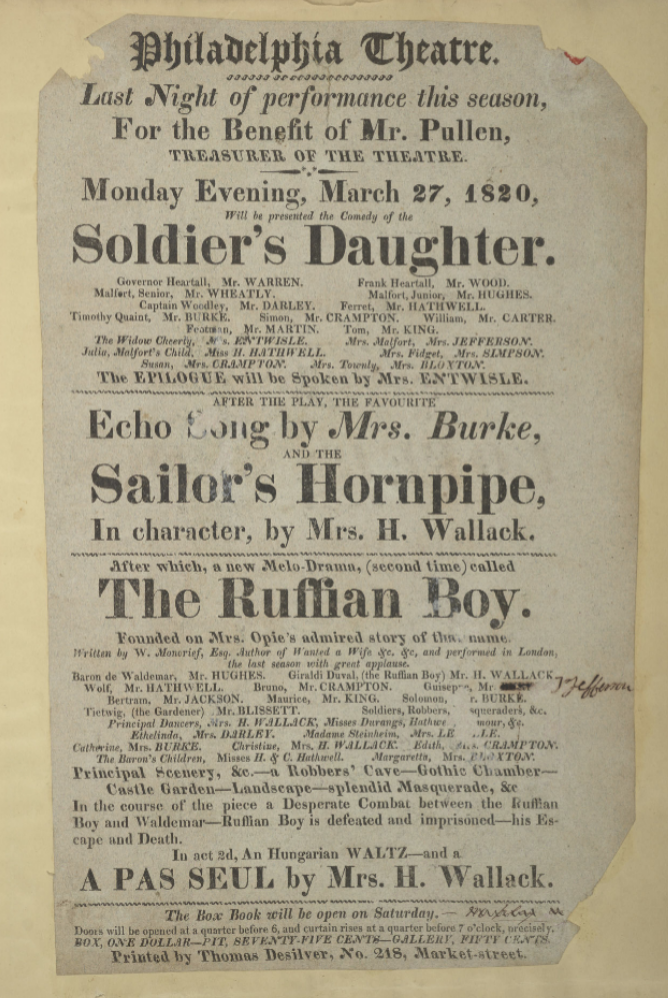 Brede, Charles F., German Drama in English on the Philadelphia Stage from 1794 to 1830 - a Thesis, Americana Germanica Press, Philadelphia, 1918.

Wood, William B., Personal Recollections of the Stage, Embracing Notices of Actors, Authors, and Auditors During a Period of Forty Years. Philadelphia, 1855, pp. 142-249. Digitized 2008 and available via Google Books.