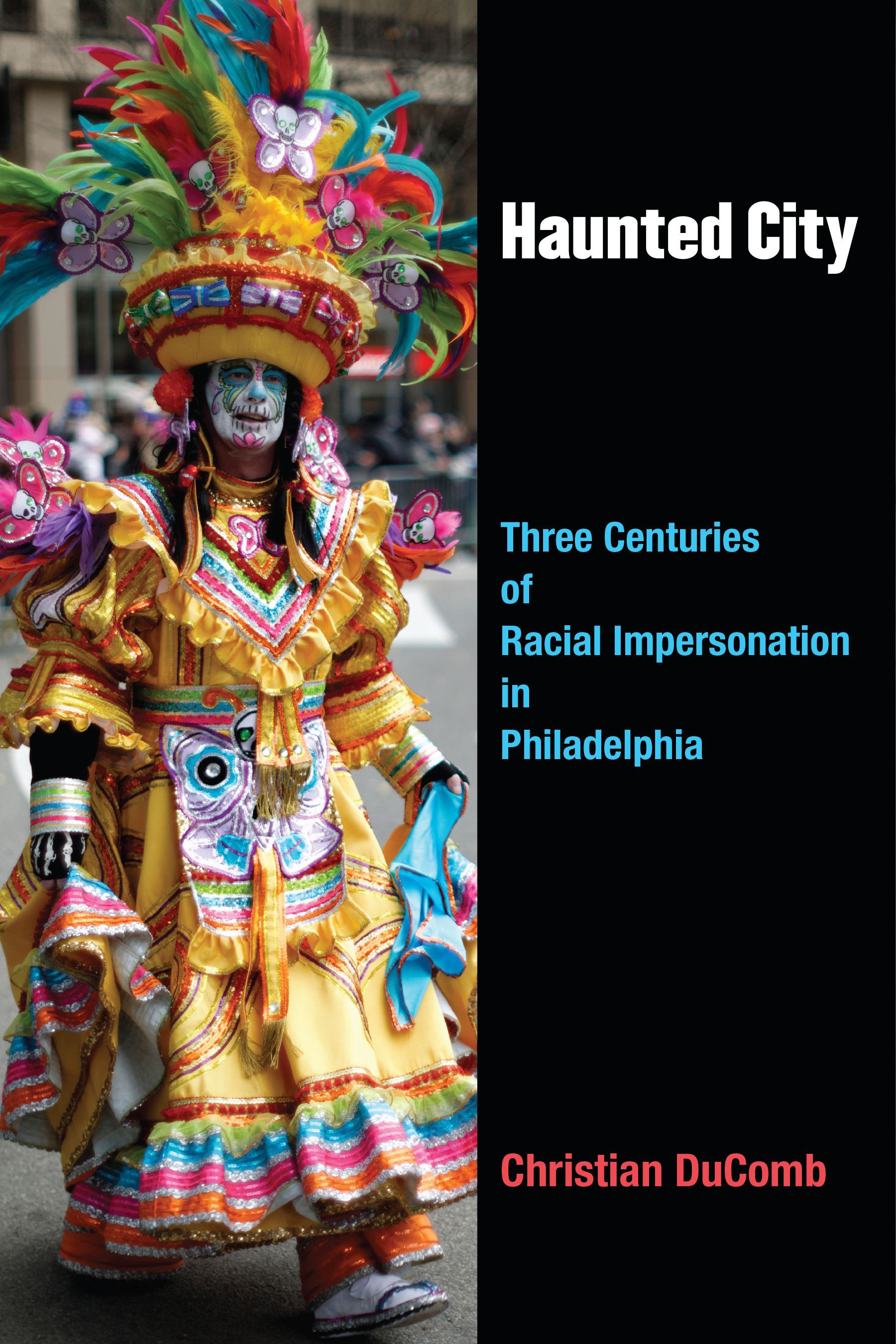 Above: The cover of Christian DuComb's book Haunted City.

Below: Christian Ducomb has himself been a Mummer. He performed as a slice of pizza with the Vaudevillians Comic Club in the 2010 Mummers Parade. (Photo from an 2017 article in the Philadelphia Inquirer by Samantha Melamed. Courtesy of Christian DuComb) 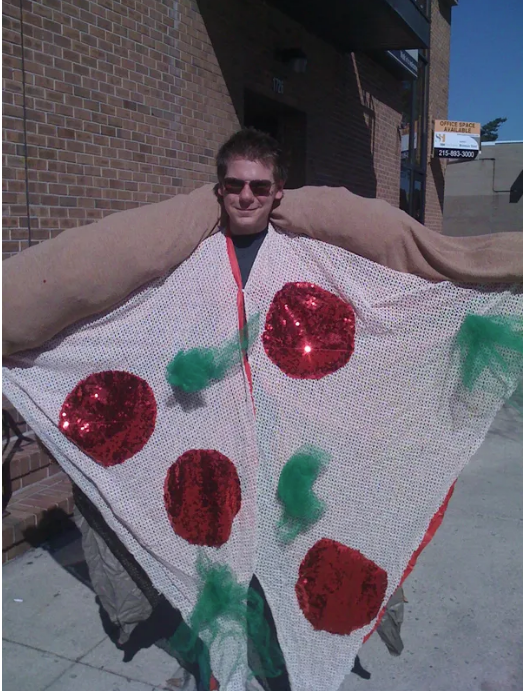 The book Haunted City is an important work on the cultural history of the Mummers Parade, and I value it especially for its emphasis on the elements of theater and performance history in the parade. It is a work of serious scholarship, and has been highly influential in its field. There are of course many other histories about the Mummers and the Mummers Parade, and I list some of them in the Bibliography below. What I might need to stress is that it is NOT an anti-Mummer book. Indeed the author has great fondness and respect for the entire Mummers Parade and annual effort and artistry that its participants put into the event.

It is a book derived from DuComb's own PhD thesis, and like many such books it has a five part structure. It is mostly the fifth chapter, which deals primarily with the Wench Brigades, are discussed in Mike Lueger's interview with Dr. DuComb. He also examines the topic in his essay, “The Wenches of the Philadelphia Mummers Parade: A Performance Genaeology,” in Performing Utopia, a book edited by Rachel Bowditch and Pegge Vissicaro. Easier to find might be his entry on the Mummers in the online "Encyclopedia of Greater Philadelphia": https://philadelphiaencyclopedia.org/archive/mummers/#24317 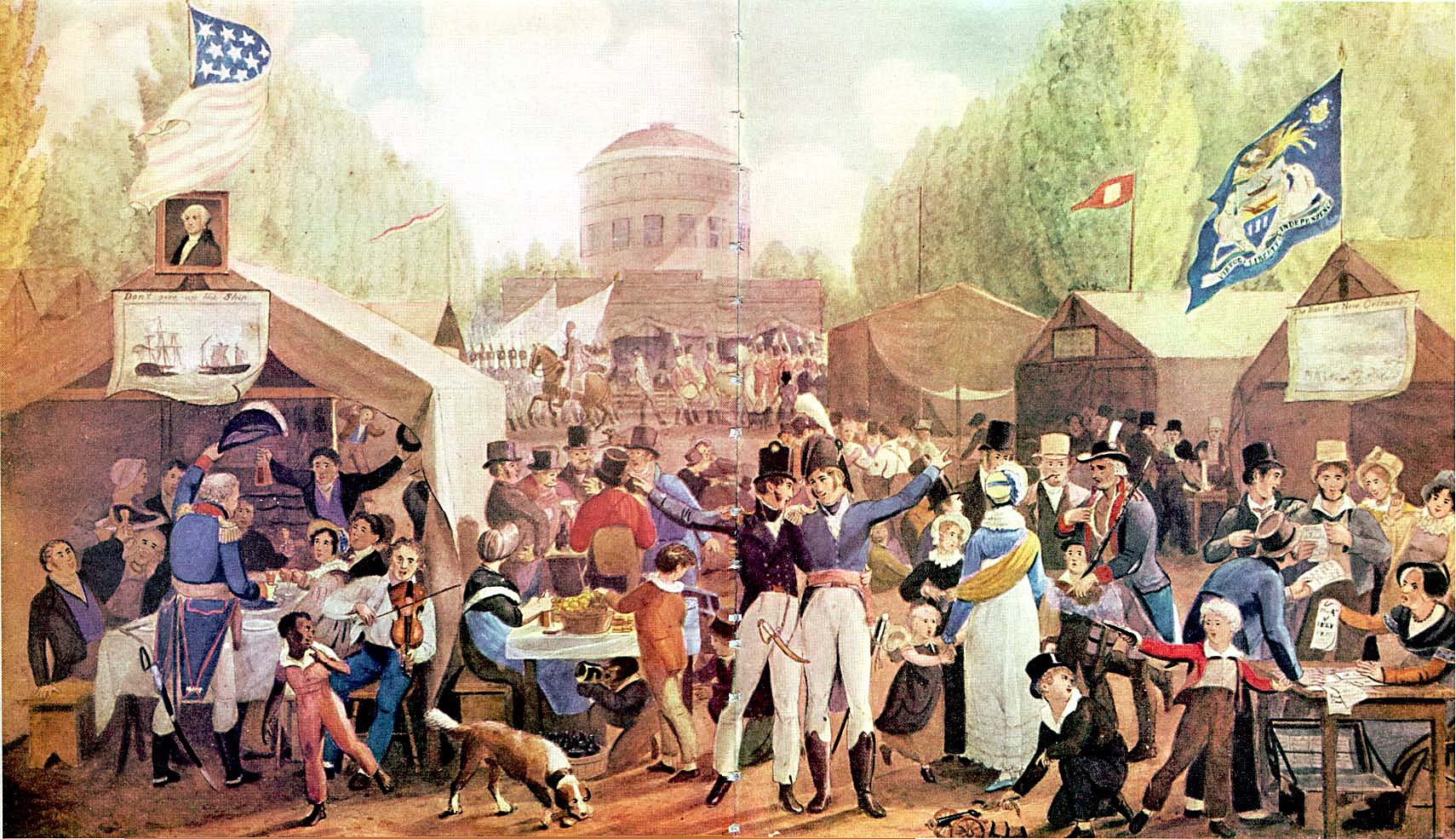 Chapter One of the book is entitled "Haunted City". At the very beginning DuComb quotes the writer Michael de Certeau: "There is no place that is not haunted by many different spirits hidden there in silence, spirits one can 'invoke' or not. Haunted places are the only ones people can live in." Above one can see a painting by our old friend John Lewis Krimmel, which shows a chaotic multiracial Fourth of July celebration in Philadelphia's Center Square in the early 19th Century. Before Center Square became the site of City Hall, it was a liminal urban space - on the edge of things, not actually at the center. It was used for militia drills, hangings, burials, demonstrations, a fountain, and raucous summertime parties. It was a place both to exhibit power and to subvert it - which every January 1st, it becomes once again as the Mummers Parade swirls around it.

So this might go some way to explaining the title of the book. Although the cover illustration shows a Mummer in full regalia, wearing a sort of Mexican "Day of the Dead" outfit, with a feathered sombrero and a skull-like mask, DuComb is not writing about spooky ghosts in the Halloween sense. Rather he feels that any place, especially urban spaces, are layered with cultural practices and memories and rituals that are constantly being re-enacted and re-invented. One cannot ignore them or eradicate them. (Admittedly, in actual Mummers Parades one frequently sees death's head masks and skulls and Hell Mouth floats and set pieces - the Mummers love that sort of thing.) 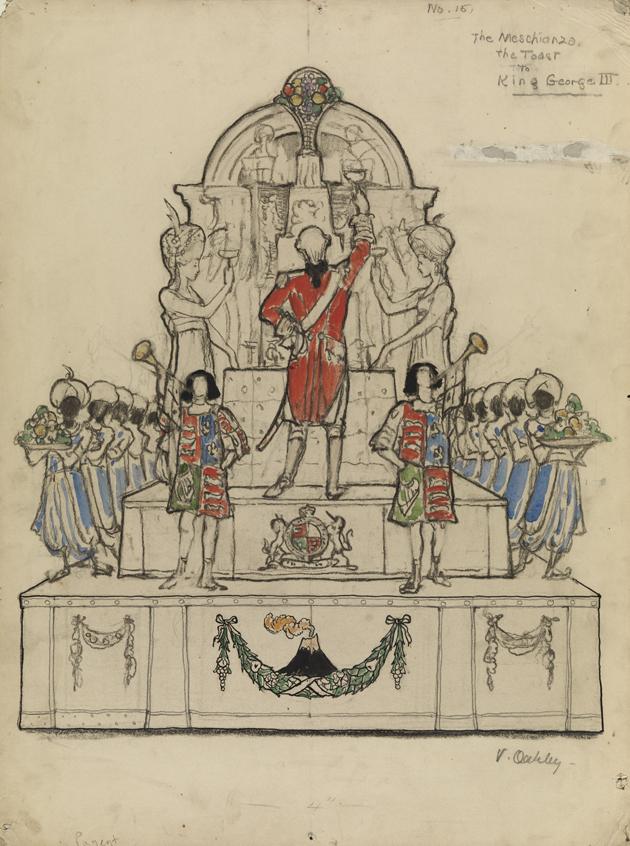 Chapter Two goes on to discuss other such 'haunted' areas of the city, such as the spaces of South Philadelphia where the infamous "Meschianza" - an elaborate tournament and party was staged by the occupying British Army in May of 1778. (The illustration above is by Philadelphia artist Violet Oakley, who designed a float about the Meschianza for a grand pageant that paraded up Broad Street in October 1908.)

I discussed this event at length in a Bonus Episode for the podcast which is available (at present) only to our subscribers on Patreon. I'm hoping to convert it into a regular episode in the future. But for DuComb's purposes, he was especially interested in the fact that the pageantry and parade of this event included Black servants (or white servants in blackface) dressed up like Turkish slaves - a conflation of blackface masking and Orientalism that pervaded British and American theater. But one could go back further: South Philadelphia was also the place where Swedish settlers celebrated 'mumming' activities during the Winter Solstice such as masking and shooting off guns. These practices persisted in Philadelphia mummery - indeed they were known as "Mummers and Shooters" well into the 20th Century. Even today it is an unfortunate habit of Philadelphians to discharge guns into the air at midnight on New Years Eve.

Another such event that used "Oriental Blackface" was the play The Slaves of Algiers by Susanna Rowson, which was performed at the New Theatre on Chestnut Street in the 1790's, as well as the performance of Blue Beard that we described in such detail in our Episode 8.

Chapter Three of the book details a lot of the iconography of anti-Black imagery and other racist performance practices in Philadelphia during the 1820s, 30s, and 40s, most particularly Edward William Clay's illustrations for the infamous book "Life in Philadelphia", which did so much to spread racial caricatures of Black people that would become pervasive in American culture, most particularly in the Minstrel Shows that we will attempt to discuss in our next episode.

In addition DuComb discusses early minstrel show music such as "Coal Black Rose" (above) which was sung on the Walnut Street Theatre's stage in 1829 by George Washington Dixon. 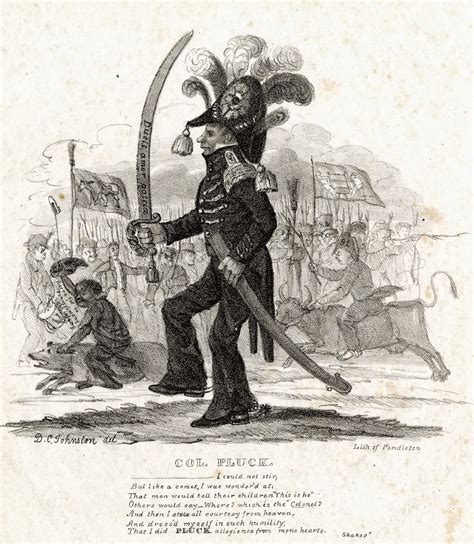 Chapter Four of the book is called "Colonel Pluck, Bobalition, and Minstrel Remains". It details the long and strange history of Colonel Pluck - an actual person of small stature (and likely mentally impaired) who became infamous in Philadelphia and elsewhere for being elected to be the captain of militia in a city company of working class men. The figure of Colonel Pluck was later transformed into a blackface caricature in minstrelsy, and was cited in anti-abolitionist demonstrations and riots in the antebellum era.

The entire aspect of parading and its quasi-military aspects and satirical possibilities are also discussed in the chapter. It is notable that Philadelphia had a long history of African American marching bands and musical groups, some of which later began marching with the Mummers. Even the great James A. Bland, the composer of the song "Oh Dem Golden Slippers", may have performed as a Mummer during his final years in Philadelphia in the early 20th Century. It is possible that he was associated with Dumont's Minstrels, one of the last surviving minstrel theaters in the city. Dumont himself was an early supporter of the Mummers Parade, and likely introduced Bland's song into the repertoire. 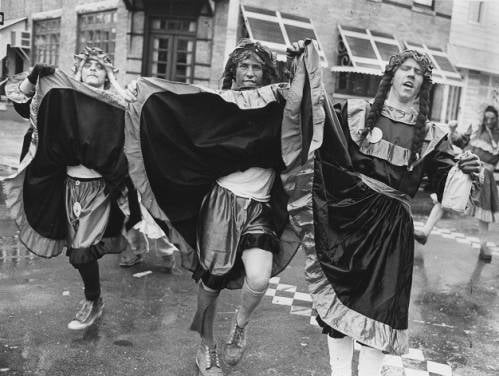 Chapter Five of the book deals specifically with the aspect of the parade known as "Wenches" - such as could be seen in the year 1978 image in the Temple Library George D. McDowell collection from the former Evening Bulletin. ("Members of the Phillip J. Hammond Mummers Brigade dance in front of Ricky's Tavern despite the rain." Photo by Barbara Pachter)

These issues are dealt with at length in the interview with Dr. DuComb, so I won't rehash them here.

But the Conclusion of Haunted City has a great final passage which I'd like to quote at length:

"Secreted in the dance steps and costume pieces, caricatures and photographs, play texts and masks, the specters of racial impersonation that haunt Philadelphia produce effects radiating outward to geographies and genealogies far beyond the City of Brotherly Love. Passing through a wormhole of the local into a reconfigured understanding of the global, the historiography of performance in place affords a glimpse of unexpected affinities across media, across bodies, and across time -- lost connections that haunt the present, flashing up at moments of danger from the threshold of invisibility."


Bibliography on the History of the Mummers Parade:

DuComb, Christian, "Mummers" in The Encyclopedia of Greater Philadelphia". https://philadelphiaencyclopedia.org/archive/mummers/#24317