Charlotte and the Cushman Club 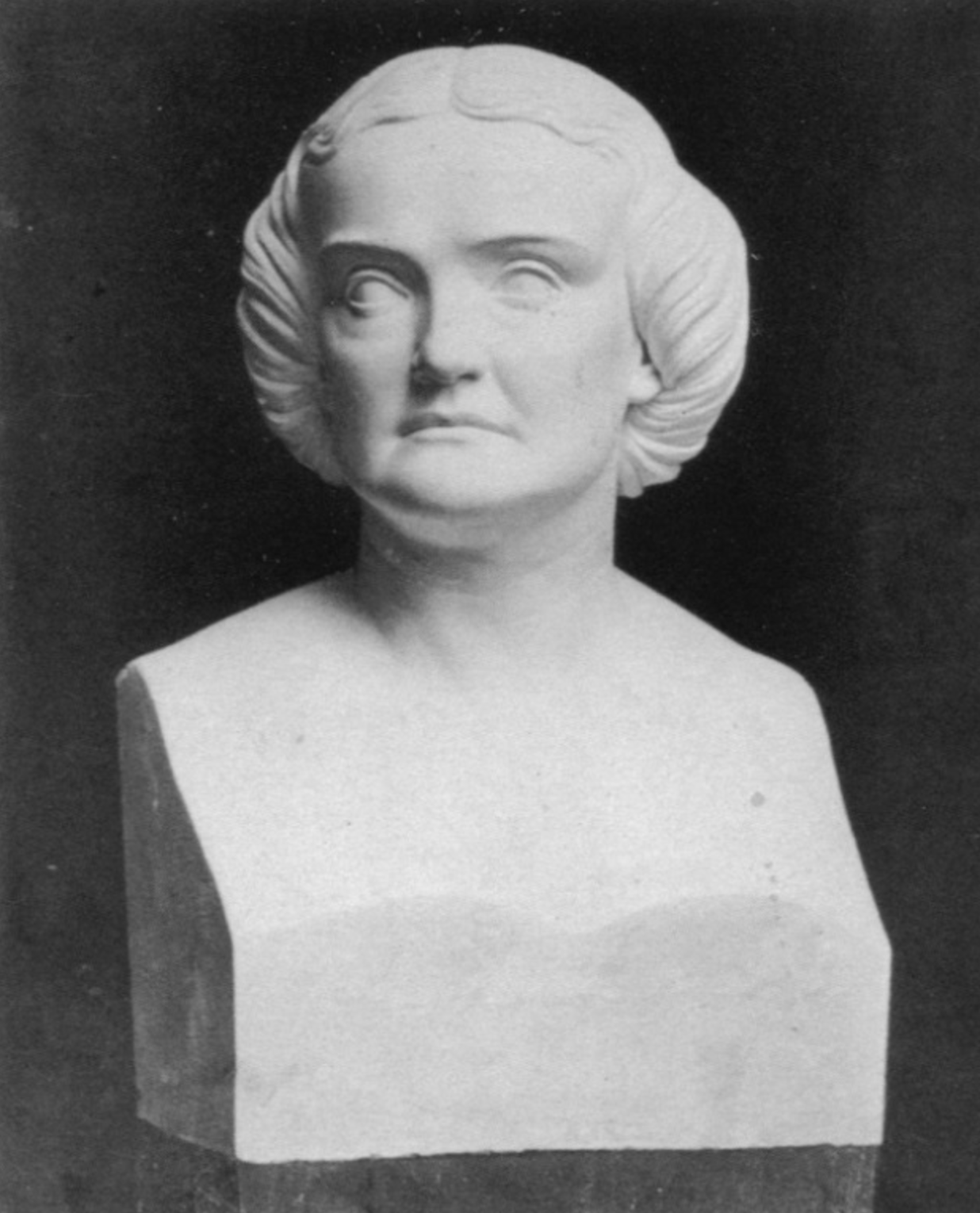 A copy of the bust of Charlotte Cushman by Emma Stebbins, which was a longtime feature of the collection of the Cushman Club in Philadelphia.

It was given to the club in 1957 by Stuart Louchheim, then the president of the Academy of Music. It now resides in a special display at the University of the Arts on Broad Street.

Below, a September 1842 newspaper advertisement at the beginning of Cushman's tenure and the Manager of the Walnut Street Theatre - which at that point in time was still calling itself the "American Theatre, Walnut Street". The name was intended to point out to Philadelphia theatergoers that the Walnut Street's company was more likely to be native-born American actors. This was to contrast the Walnut with the supposedly more "British" Chestnut Street Theatre nearby, which billed itself as "Old Drury", and tended to be favored by Philadelphia's elite audiences.

Note that the ad pays great attention to the recent refurbishing of the theater's interior, making it "the Most Elegant Theatre in the Union"! As we mention in the podcast, this was intended to appeal to female audiences, who were looking for a more refined and respectable experience when they went to see plays. The early 1840s were a time of considerable economic distress in America, and the male working class audiences which had formed the base of the Walnut's audience may have been less likely to spend money on shows. Cushman's prominent role in the company's management, as well as the improved wallpaper and decorations, were meant to bring in more middle-class customers. 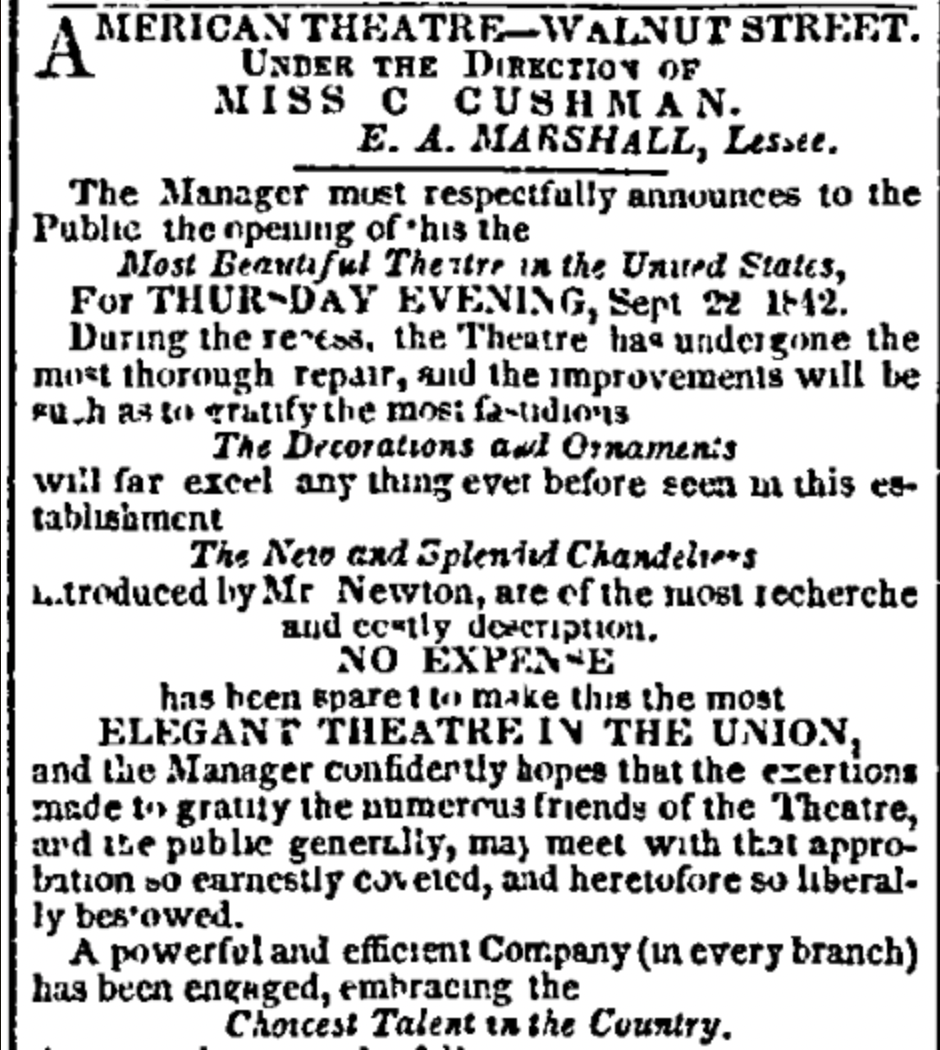 Next is a copy of the satiric valentine about Charlotte Cushman that we mention in the podcast episode. It is in the digital collection of the Library Company of Philadelphia (the Persistent Link: https://digital.librarycompany.org/islandora/object/digitool%3A6285 )

Though the Library Companies notation for the item is rather vague about its creation date - "between 1840 and 1880?" is what it says on the catalog entry - I believe we can safely date it to between 1842 and 1844, when she was an active presence in Philadelphia. 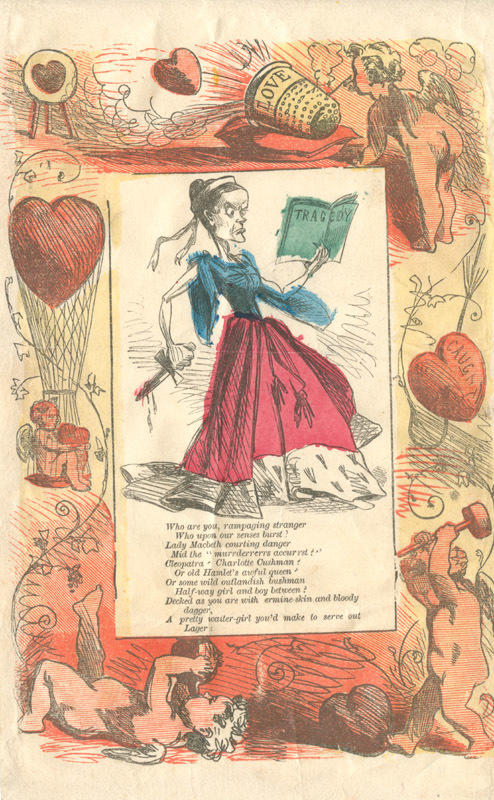 Speaking of romance, here is the miniature portrait of Cushman painted by the artist Rosalie Sully in 1844 during their brief and intense love affair. Next to it is a portrait of Rosalie, done by her father Thomas Sully, showing her leaning over a canvas, a paintbrush in her hand and a large hat (suitable for working outdoors on landscapes) shading her eyes.

Rosalie and Charlotte met in the summer of 1843, while the actress was getting her portrait painted at the studio Rosalie shared with her father. The two women soon were exchanging very passionate letters with each other.  On July 5, 1844, Cushman wrote in her diary that she had "Slept with Rose" and, on July 6, 1844, Cushman wrote that they were "married". However,  Cushman left in November 1844 on an English tour, and Rosalie soon found out that Cushman had started seeing someone else even before she went abroad. Rosalie sank into a deep depression, and never really recovered from the grief at the end of the "marriage" with Charlotte. Rosalie died in 1847 at the age of 29, and is buried in the Sully family plot at Laurel Hill Cemetery in Philadelphia. 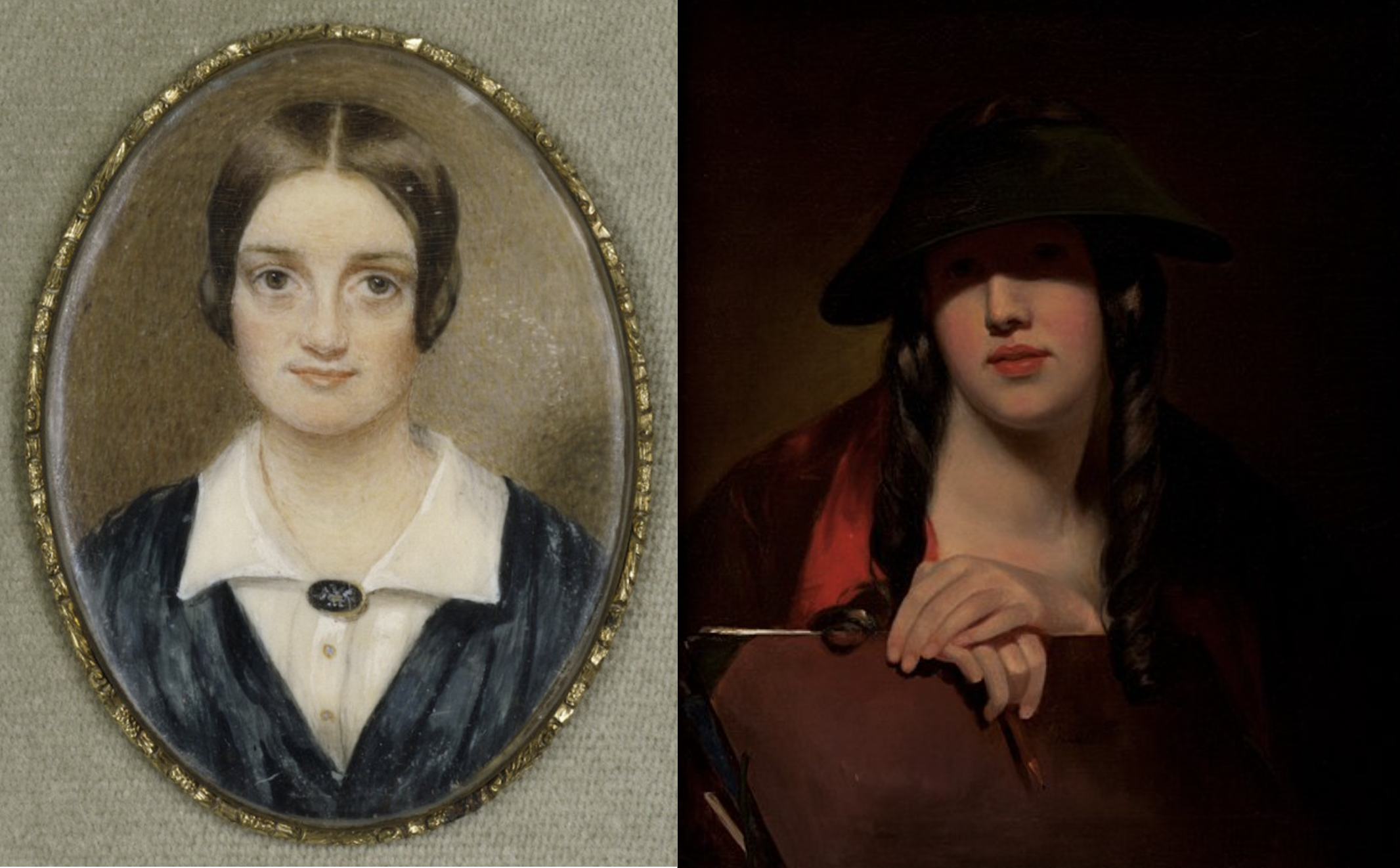 Below is a montage of three of Charlotte Cushman's most famous roles in the 1840s and 50s, as her career began to take off. On the left is a famous image of Charlotte playing Romeo to her sister Susan's Juliet. This is a mezzo-tint of a print based on a portrait done by Thomas Sully (though I'm not quite sure where the original is, or if it still exists). In the middle is an engraving of her Lady Macbeth (one a series of prints of eminent actors of the day - I've shared ones from the same series of Fanny Kemble and Edwin Forrest in earlier blog posts). To the right is Cushman as "Meg Merrilies" in Guy Mannering. This is actually one of the more flattering depictions of her in the role. It was quite unusual for an actress to willingly appear as old and ugly in this period - it's a tribute to Cushman's artistry and integrity that she made it one of her signature roles. She continued to play (or give public readings) of all three of these roles until shortly before her death in 1876. 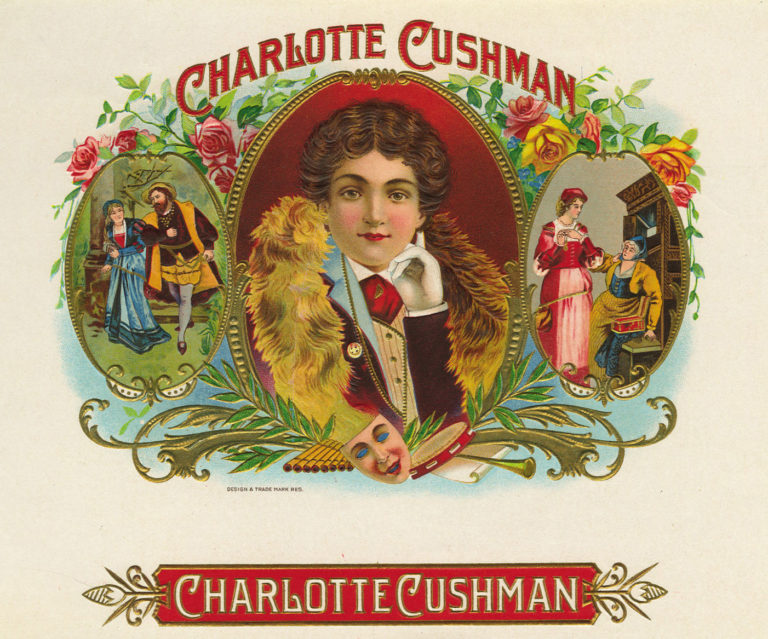 Above, a 1916 image of Charlotte Cushman on a cigar box, part of a series depicting famous actors and actresses. The two flanking images are fairly generic Shakespearean scenes, and don't really seem to depict Cushman at all. The central image does not really much like her either, to be honest, but it is interesting to note that she is depicted in male attire. So perhaps even in the early 20th Century, many years after her death, there was some remaining memory of the fact that Cushman often appeared in male roles onstage. And perhaps it was also a subtle acknowledgment of her sexuality.

Below, a photo of Lydia Ellicot Morris of Philadelphia, the original founder of the The Charlotte Cushman Club in 1907. 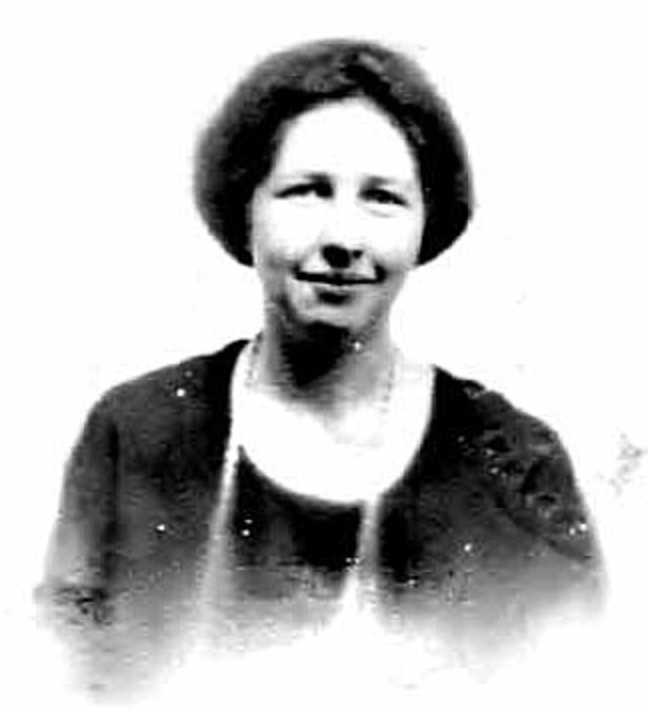 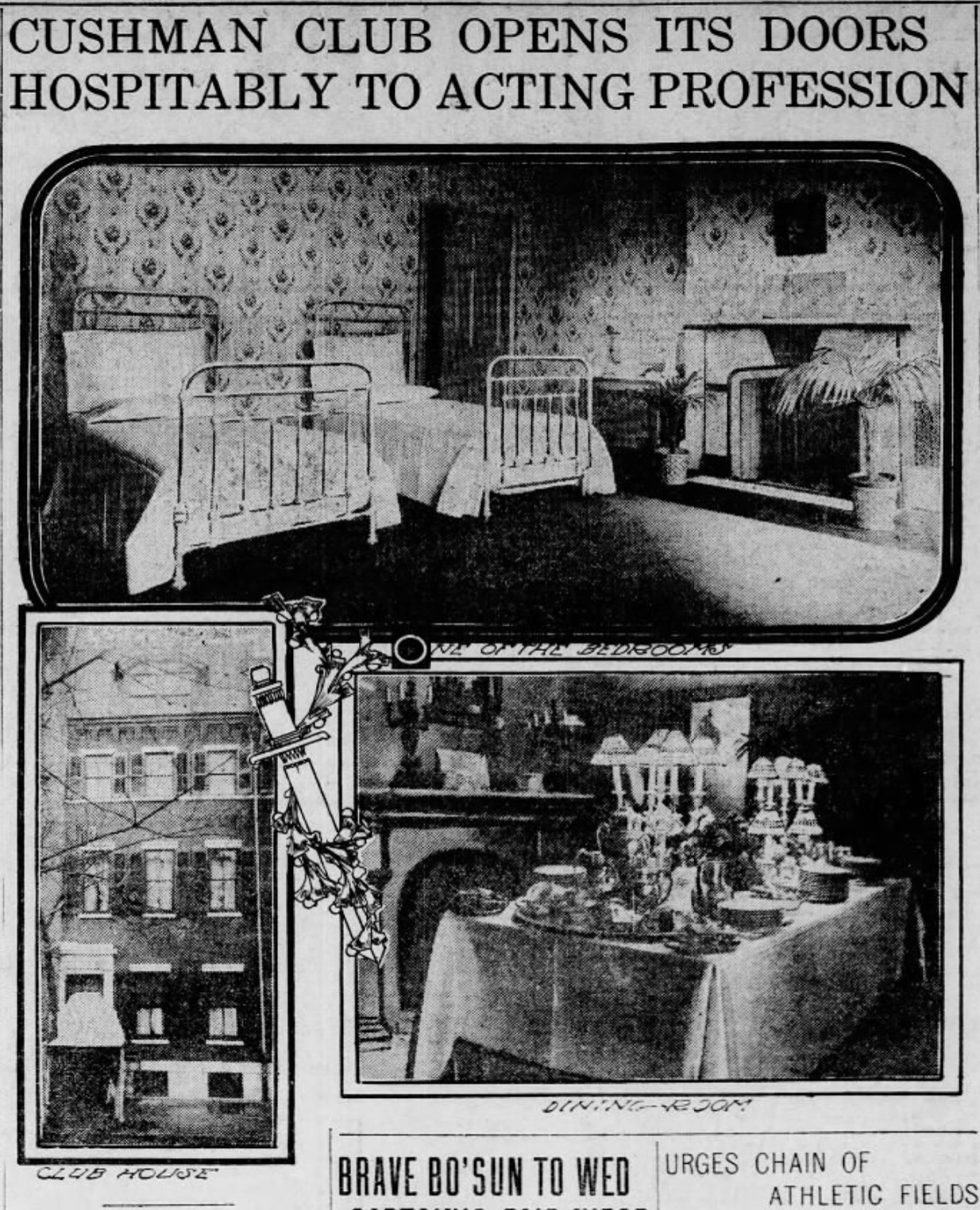 The Cushman Club began its mission, as a social organization dedicated to providing inexpensive and convenient housing for traveling actresses and chorus girls, just a few months after Mrs. Morris' inspiration. The new organization was a joint effort of many of her friends, all prominent Philadelphian women, as well as several New York and Philadelphia church groups.

On January 17, 1908, a story in the Philadelphia Inquirer the next day read: "Two small boys stood outside the doors of 322 South Tenth Street yesterday afternoon, and as they watched the throng of fashionably gowned women pass in under the canopy one said to the other: 'One of those big weddings, I guess.' "

"In a way the small boy was right, for the formal opening of the Cushman Club not inaptly might have been called a wedding of the Church and the Stage. Under the auspices of the Philadelphia Chapter of the Actors' Church Alliance the doors of the new club house was thrown open, and church folk and chorus girls met on the common ground of friendship."

In the new home-away-from-home for female theatricals, said the article, "there are "sleeping accommodations for about twenty, a large reception room and parlor, a library and a sewing room. In a pantry back of the sewing room there a number of chafing dishes, and the late luncheon, so popular with the fair members of the profession, will be made possible in the new home where any young woman boarder may cook what she chooses, after her day's work is done."

The reception, continued the Inquirer, lasted from 3 to 5 pm. "Tea was poured in the pretty dining room of the clubhouse and a brilliant musical program helped to make the occasion enjoyable."

As we detail in the podcast, over the years the mission of the group shifted. By mid-century it had become more of a group dedicated to receptions and awards for visiting eminent theater people touring through Philadelphia, as well as becoming a growing repository for artifacts and theatrical archives. In a story from the Philadelphia Inquirer Magazine from February of 1954, we can see its current President, Mrs. Boyd Lee Spahr, presiding over the famous tea table at the club. We can also see a photo of Eleanor Westcott, who was always interested in her work in building up the club's theater history collection. 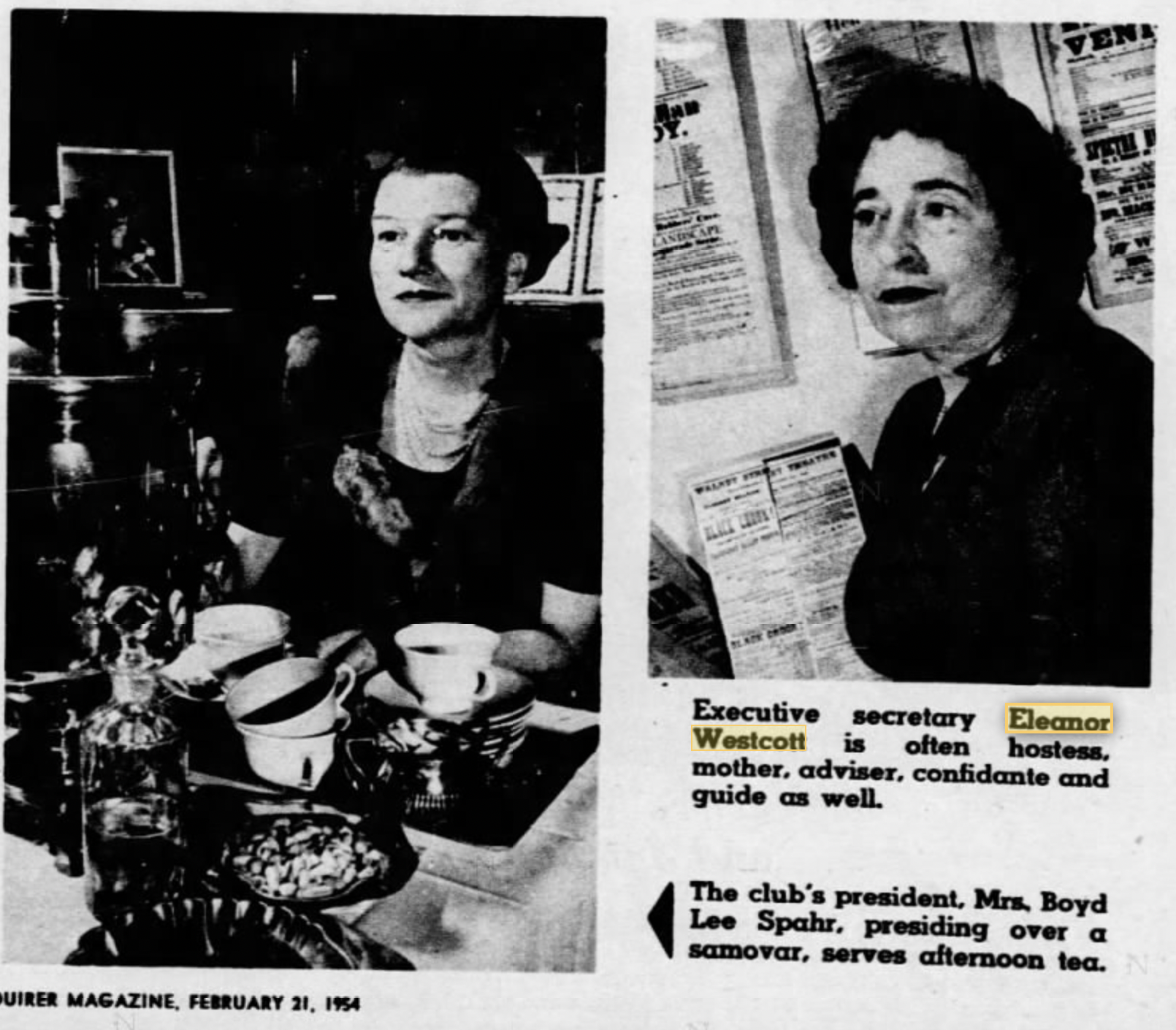 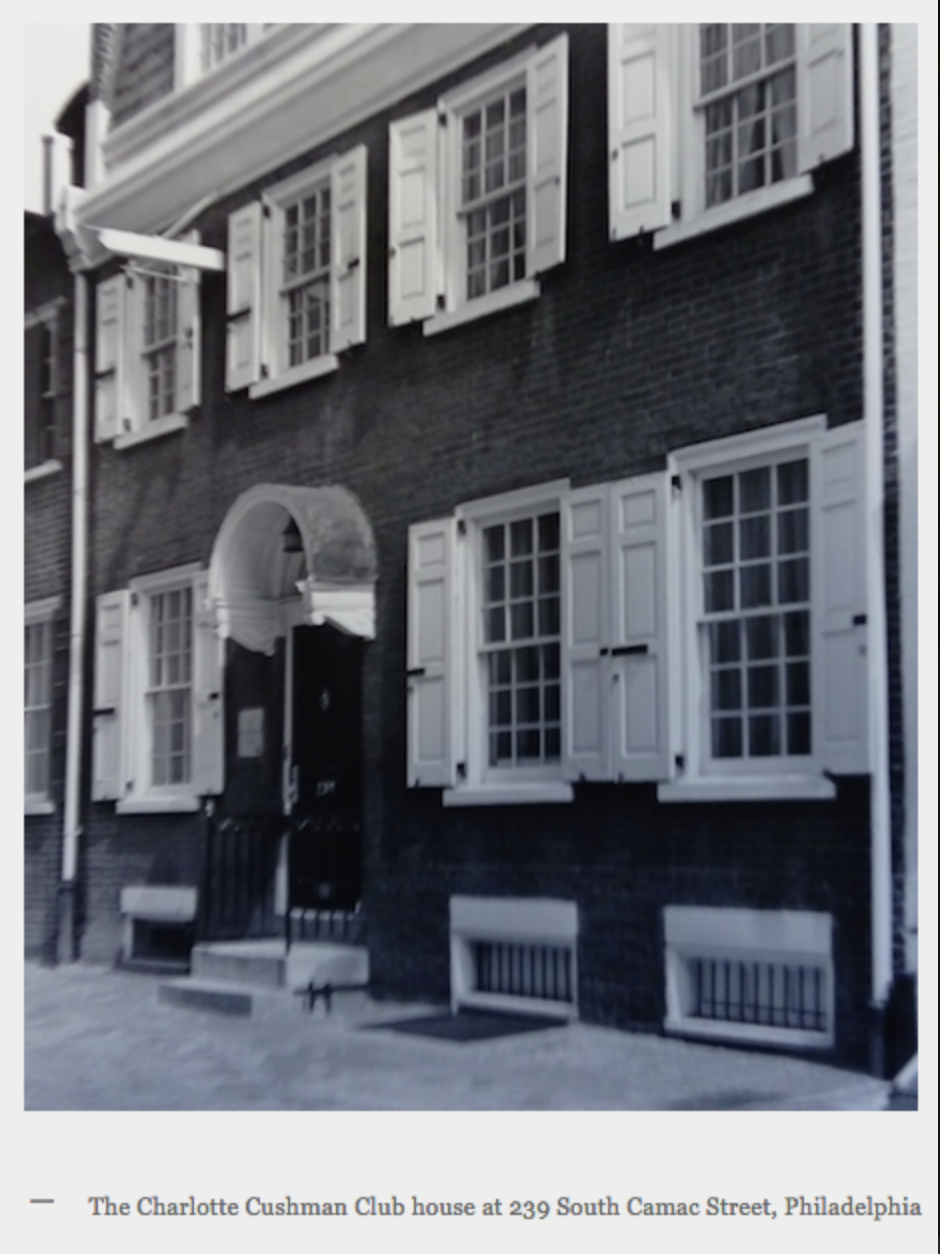 In the 1960s, Spahr and Westcott were also both instrumental in moving the club from its location on Locust Street to the new clubhouse on 239 Camac Street.

The new location also had a few cozy bedrooms and facilities for visiting actress, as well as serving as a place to hold receptions for the recipients of the annual Charlotte Cushman Club Lifetime Achievement Award. Below, John Houseman views his name on the silver trophy cup in 1984. 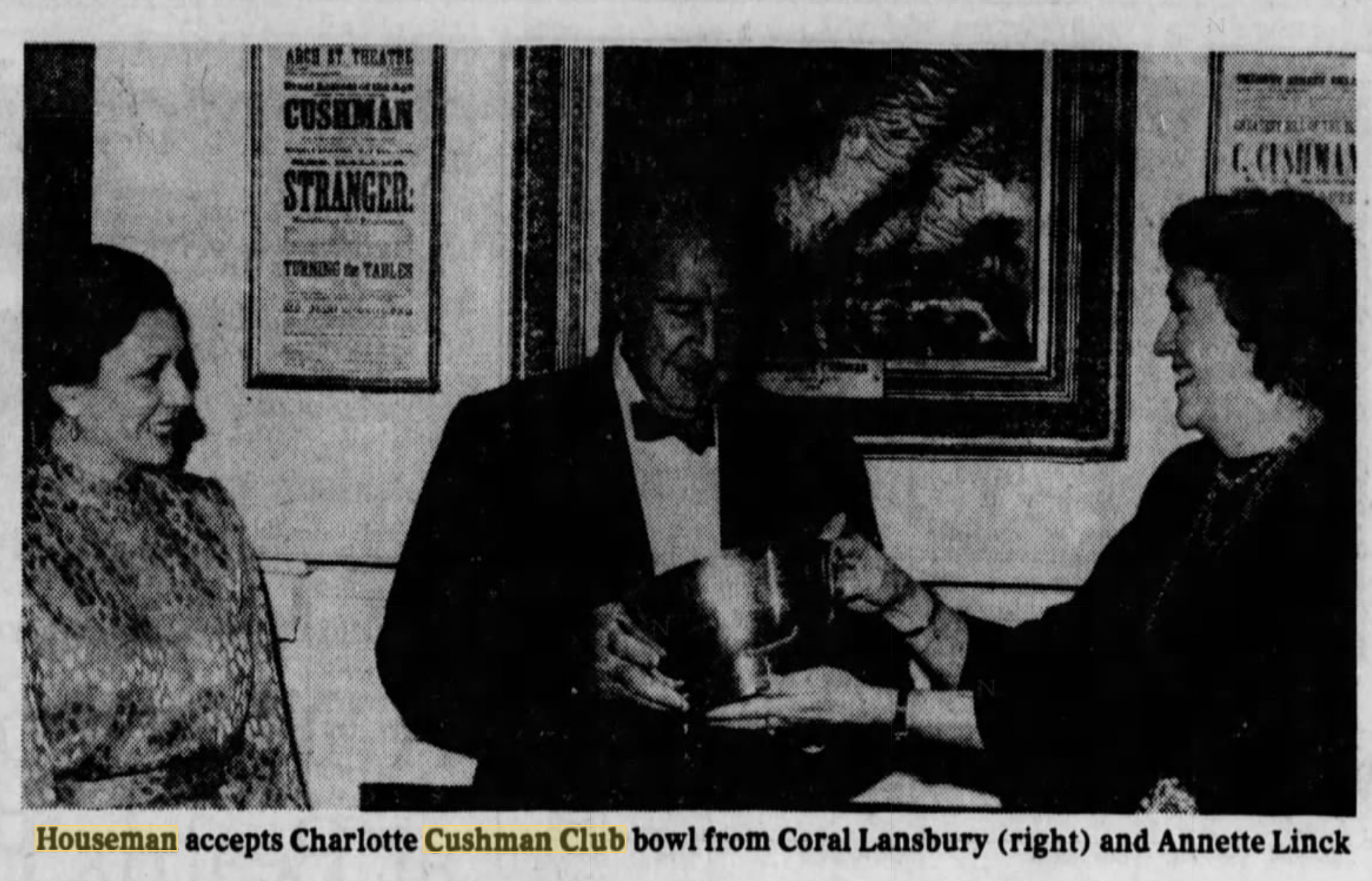 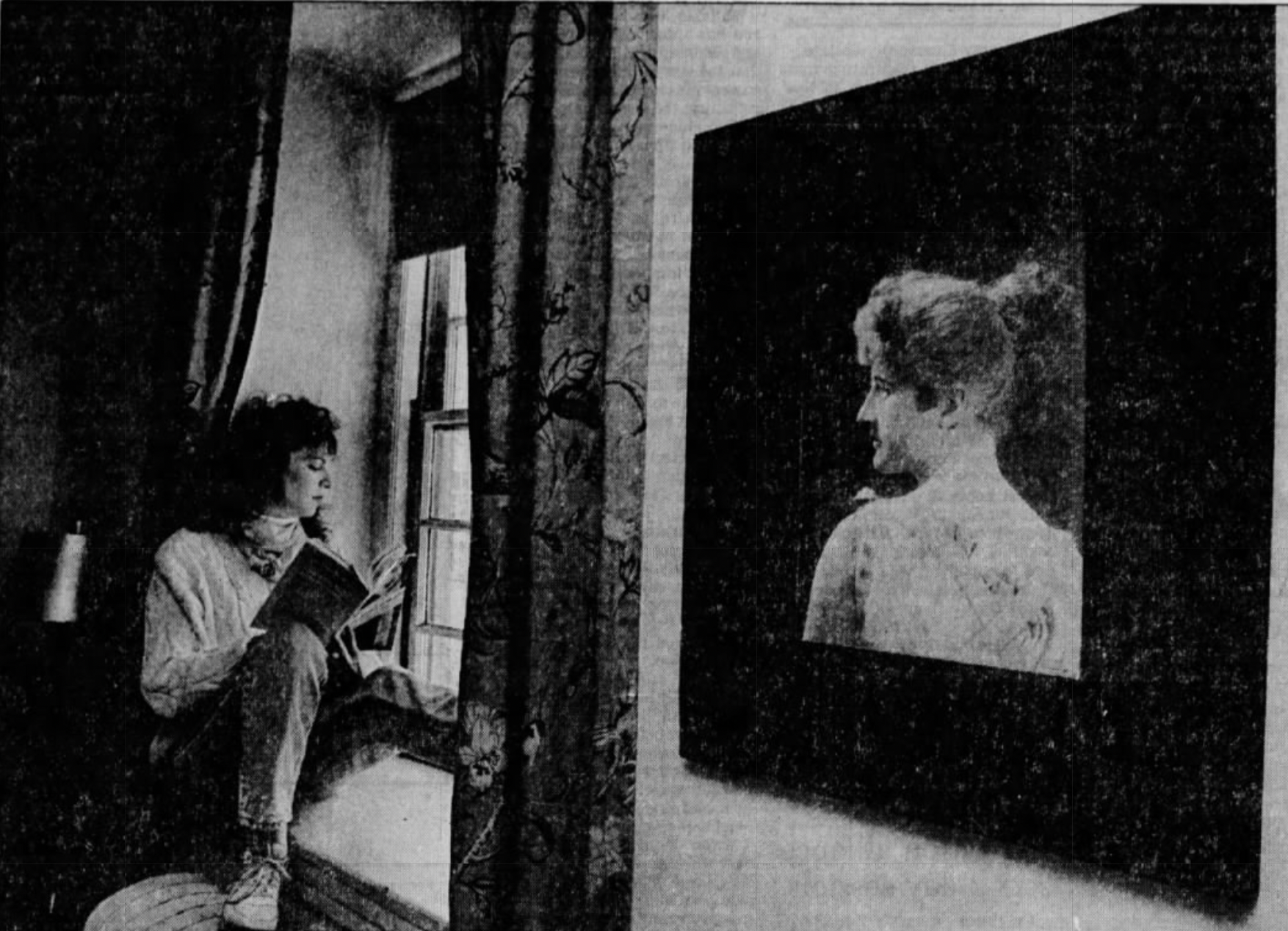 As late as 1988, female cast members of touring shows playing in Philadelphia could find inexpensive and convenient lodging at the Charlotte Cushman Club on Camac Street. By that point in time the organization had been providing housing for actresses (and the occasional male actor) for eighty years, at various locations.
There was no TV, but there was a library. Above, in another photo from the Inquirer, Jennifer Naimo, a member of the cast of "Les Miserables", took advantage of the opportunity to catch up on her reading between shows, under the seeming gaze of a picture of Ellen Terry, the great 19th Century English actress. (Photo credit: Ron Tarver)

Below, in a final photo from the newspaper which did so much to document the activities of the club, Stebbins' bust of Cushman in the foreground, while some of the final board members of the club meet to discuss its transformation into a charitable foundation. 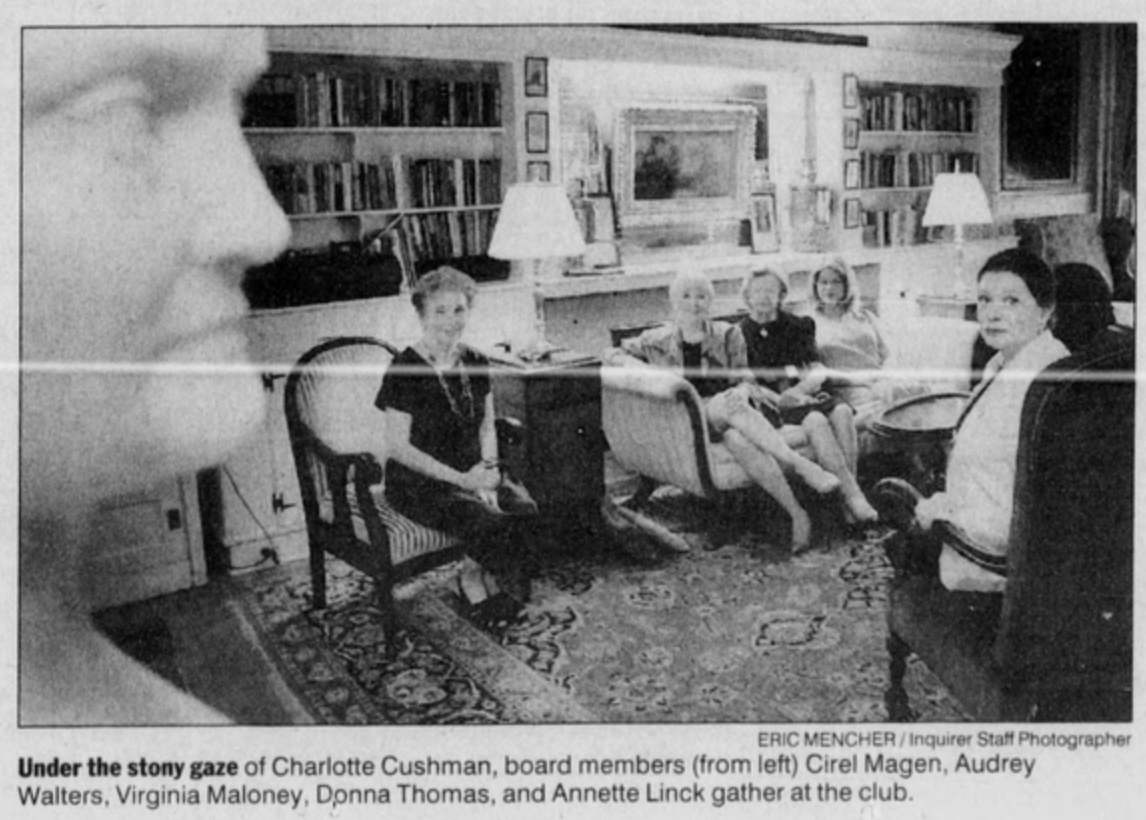 Cushman, Charlotte, and Emma Stebbins. Charlotte Cushman: Her Letters and Memories of Her Life. New York: B. Blom, 1972.

"Where Artists Found Sanctuary Its Heyday Over, The 'Little Street Of Clubs' Carries On, by Diana Marder, Philadelphia Inquirer 22 Jan. 1995: 24.