Burning Down the House - Blog Post, Map, and Bibliography for Episode 12 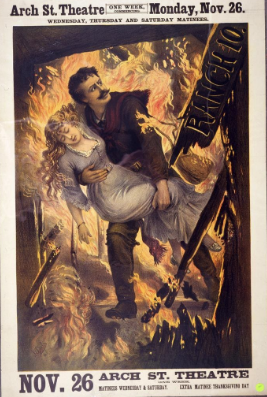 A poster advertising the production Ranch 10, a Western drama by Harry Meredith playing at the Arch Street Theatre in Philadelphia during November of 1883.

The vividness of the print makes the onstage fire  the selling point of the production. It's astonishing, in fact, how many plays of the 19th Century featured simulated conflagrations and fires on the stage, when we know how vulnerable the buildings were to actual fires.

Below, the lithograph depicting volunteer fire companies and other people fighting the blaze that destroyed the original home of the Masonic Order on March 9th, 1819. The inscription below the print says it is dedicated to the efforts of the firemen, who can be seen not only pouring water on the Hall, but also trying to save adjoining buildings. The inscription below notes that the human figures were based on the drawings of John Lewis Krimmel, the "American Hogarth", who was featured in Episode #7 and was evidently on the scene! (Sadly, Krimmel was to die just two years later in a swimming accident at a pond in Germantown.) 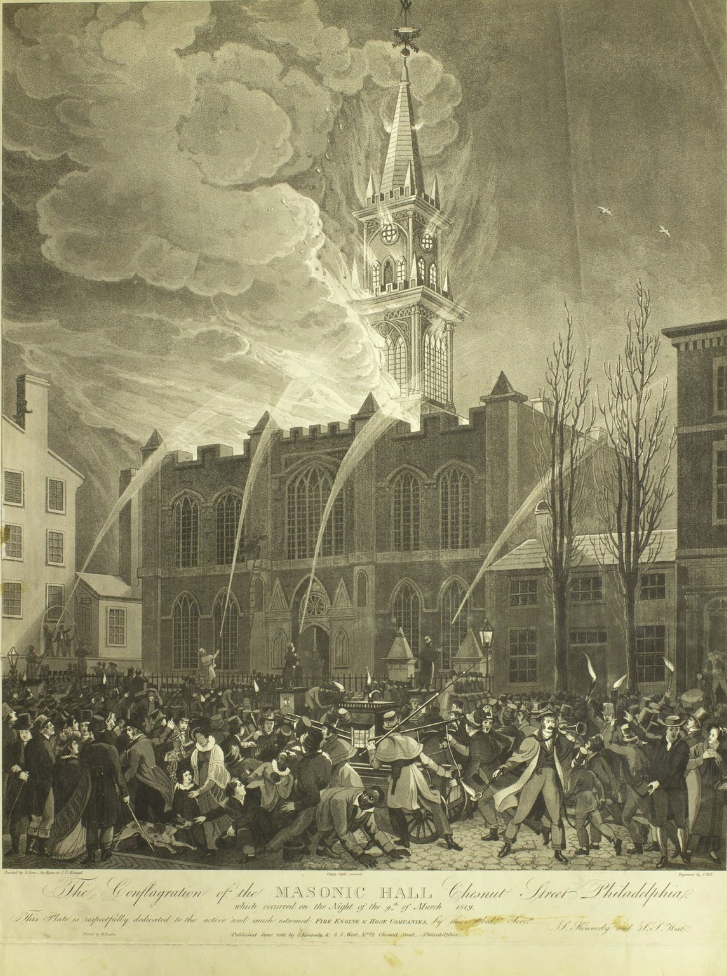 Here's a map of Philadelphia, dating from the year 1843. On it I have noted the location of many of the significant theater fires that were mentioned in the episode (I didn't talk about #13, the 1893 fire at Horticultural Hall, which was just south of the Academy of Music - I will address that in another episode). 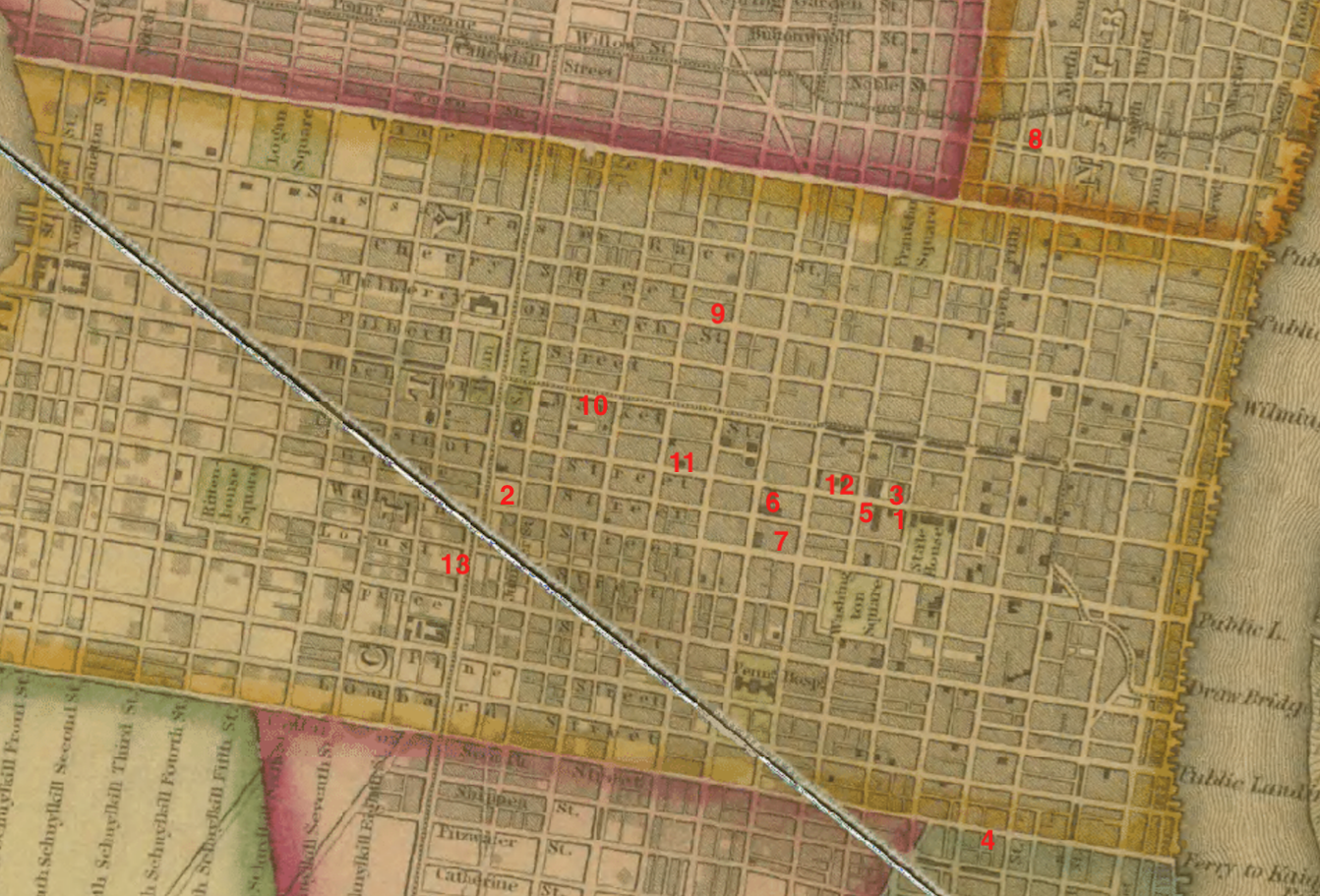 Below, a drawing made of the "Old Chestnut Street Theatre" in 1822, two years after it burned down. Evidently the artist was keenly feeling the loss of the building, and he colored it a ghostly white - which is certainly was not in real life. The "Shakespeare Building" which stood on the corner of 6th and Chestnut St., is shown in full color. It too would burn down in a fire in 1851, however. 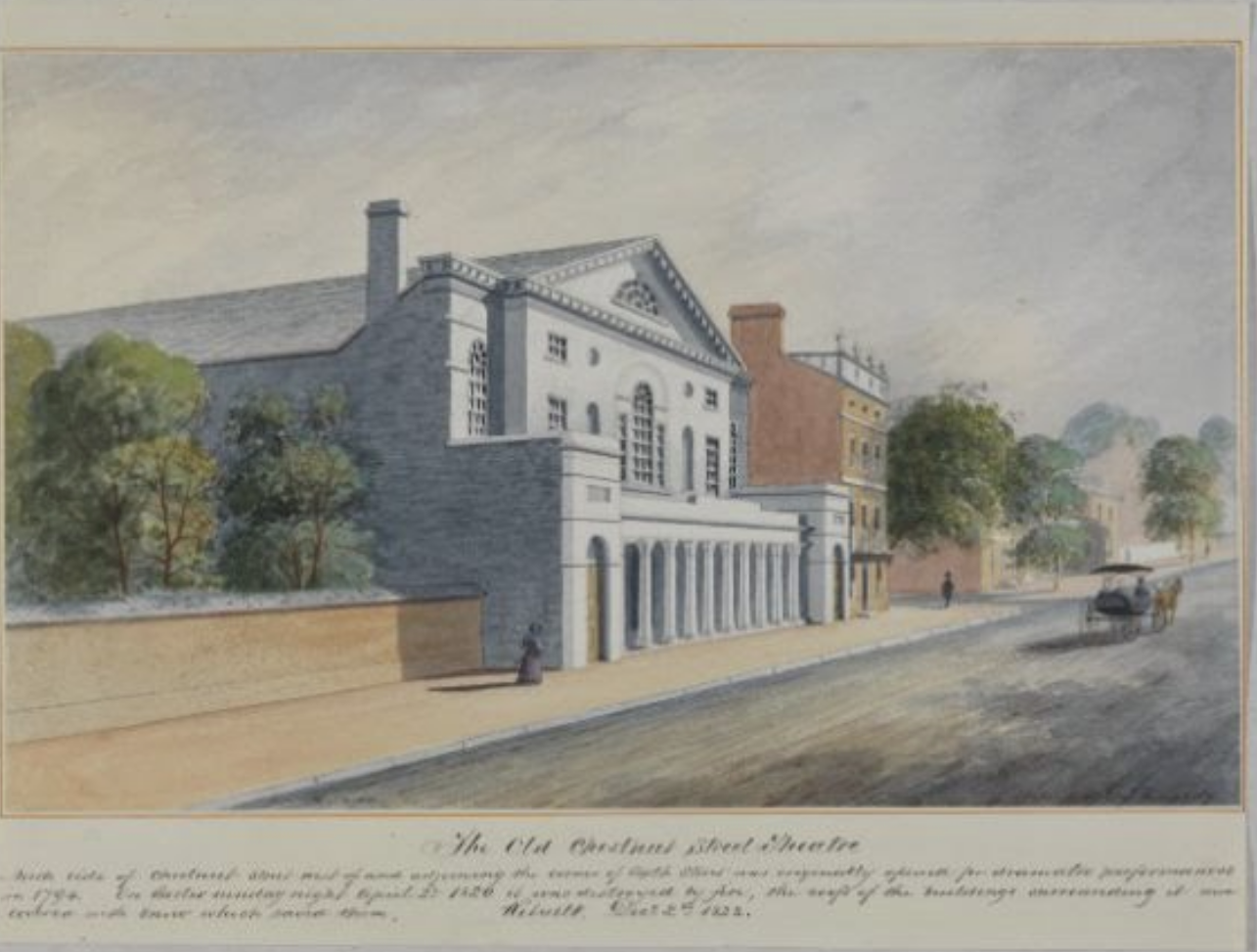 Above: Barnum's Museum, as it appeared in Rae's Panorama and Business Directory in 1851. I am not entirely sure what the animal was in the sign on the facade, and would welcome any input!

The museum and theater was contained in the upper part of this five-story building, on the corner of Seventh and Chestnut Streets, before the fire of December 30th, 1851. The fire evidently started about five in the afternoon, shortly after the matinee audience for a holiday pantomime had left. This theater was always called a 'lecture hall', in order to assuage the fears of Protestants who in the mid-19th Century still felt a theater was somewhat wicked and immoral.

"We didn't go to the theater, my dear! I took little Bobby and Suzy to a museum and lecture hall."

Fireworks set off at the end of the show were initially blamed for starting the blaze, but other witnesses say the flames were first spotted in the wooden platform for the Drummond Light, or limelight, on the exterior of the building. You can see the structure for this spotlight protruding from the corner of the third floor. Barnum had recently purchased the entire contents of the Peale Museum, the famous collection of the painter and naturalist Charles Wilson Peale, and exhibited it in the building. This collection was mostly lost in the conflagration. 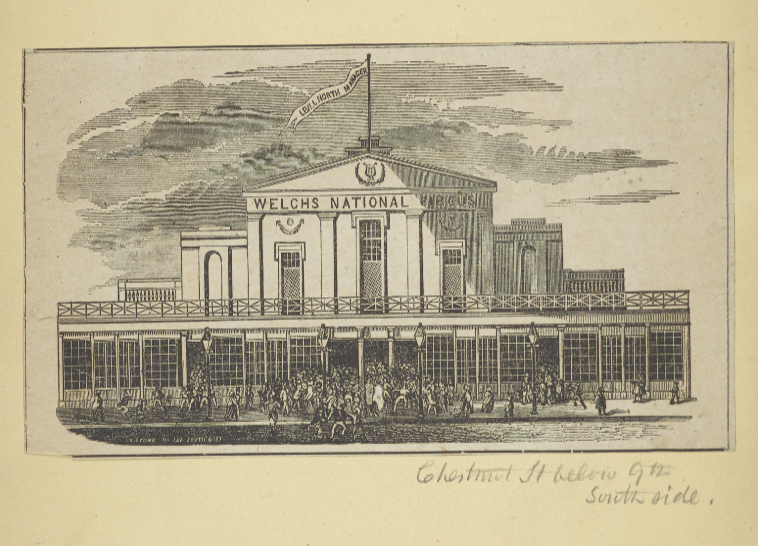 Above, one of the very few images of the National Theatre on Chestnut and 9th Street, around 1850. The historian Irvin R. Glazer, in his book Philadelphia Theatres A-Z, provides a description:

"Wm. F. Burton altered these premises fro us as a theatre and opened with a show on August 31st, 1840. The facade was over eighty feet wide being one story high at the outer edges and building in steps, wedding cake fashion, to a three story center height. Pilasters supported a frieze with the theater name engraved thereon, topped by a wide pediment, encasing a raised national emblem."

Below: a photograph taken in July of 1854, showing the ruins of the Chinese Museum and National Theatre fire, looking southeast from 9th Street towards Sansom Street. In the background are a Baptist Church and a livery stable that survived the fire. the Walnut Street Theatre was directly behind these buildings. 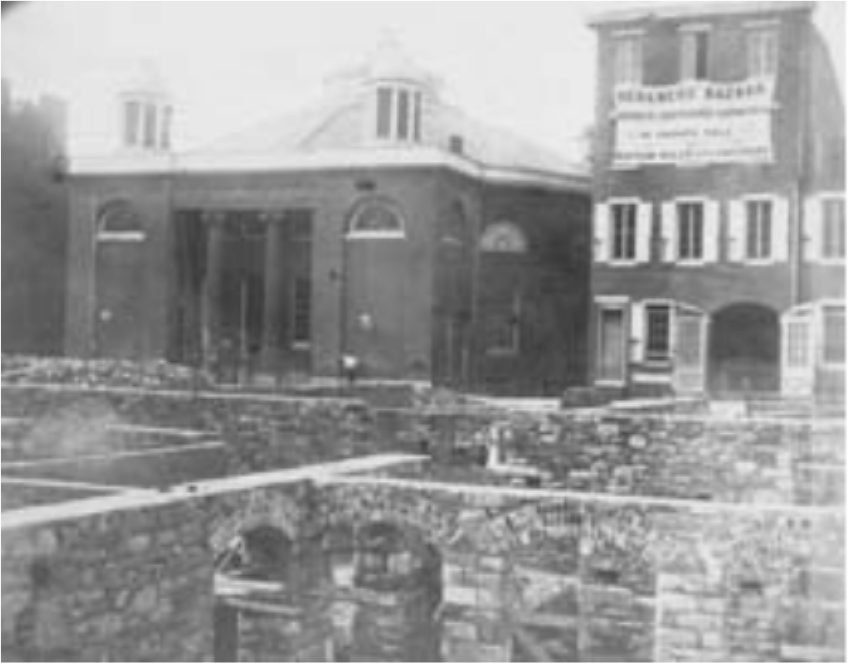 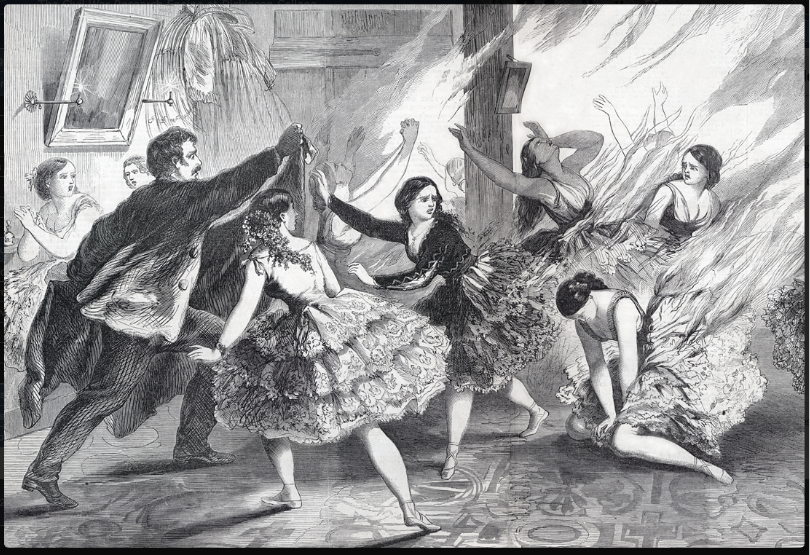 Above: The Continental Theatre ballerinas, an illustration from Frank Leslie's Illustrated Newspaper, September 28, 1861. You can see to the upper left the mirror with the open gas jets, where the fateful garment was hung by the first victim, Ruth Gale. A male stage hand is shown attempting to wrap one of the victims in a large, thick cloth to extinguish the flames. Below: Another illustration of the burning ballerinas, artist unknown, found pasted in Volume 5 of Charles Durang's History of the Philadelphia Stage. The image is somewhat less graphic, and the artist has transposed the death of the dancers from their dressing room to the stage. 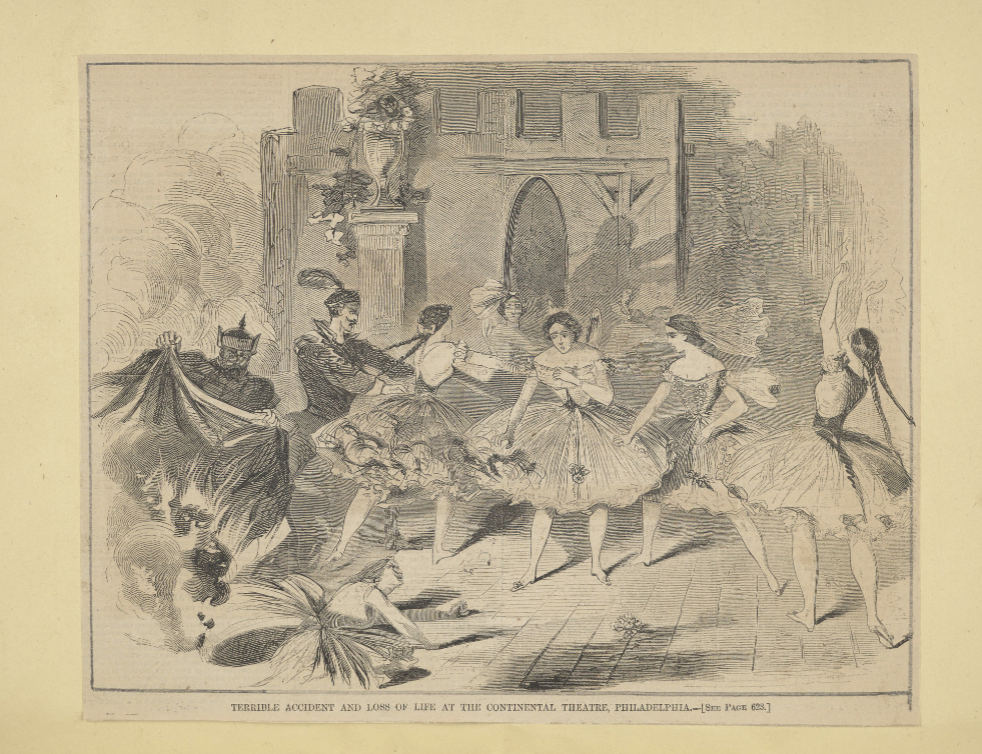 Below: Contemporary engraving of some of the victims of the fire jumping out of the dressing room windows onto Sansom street. In the picture, passers-by attempt to catch them. 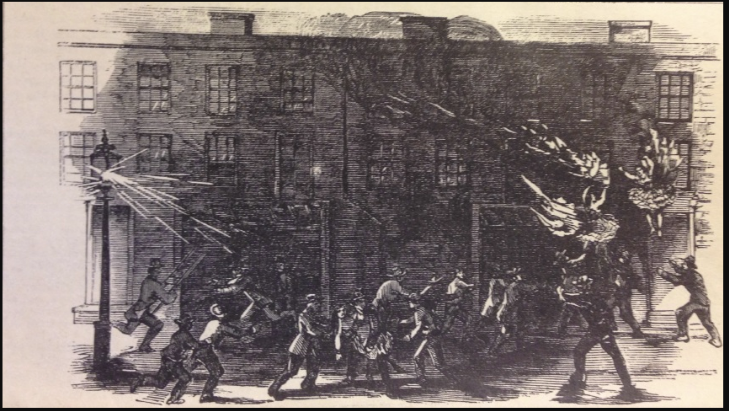 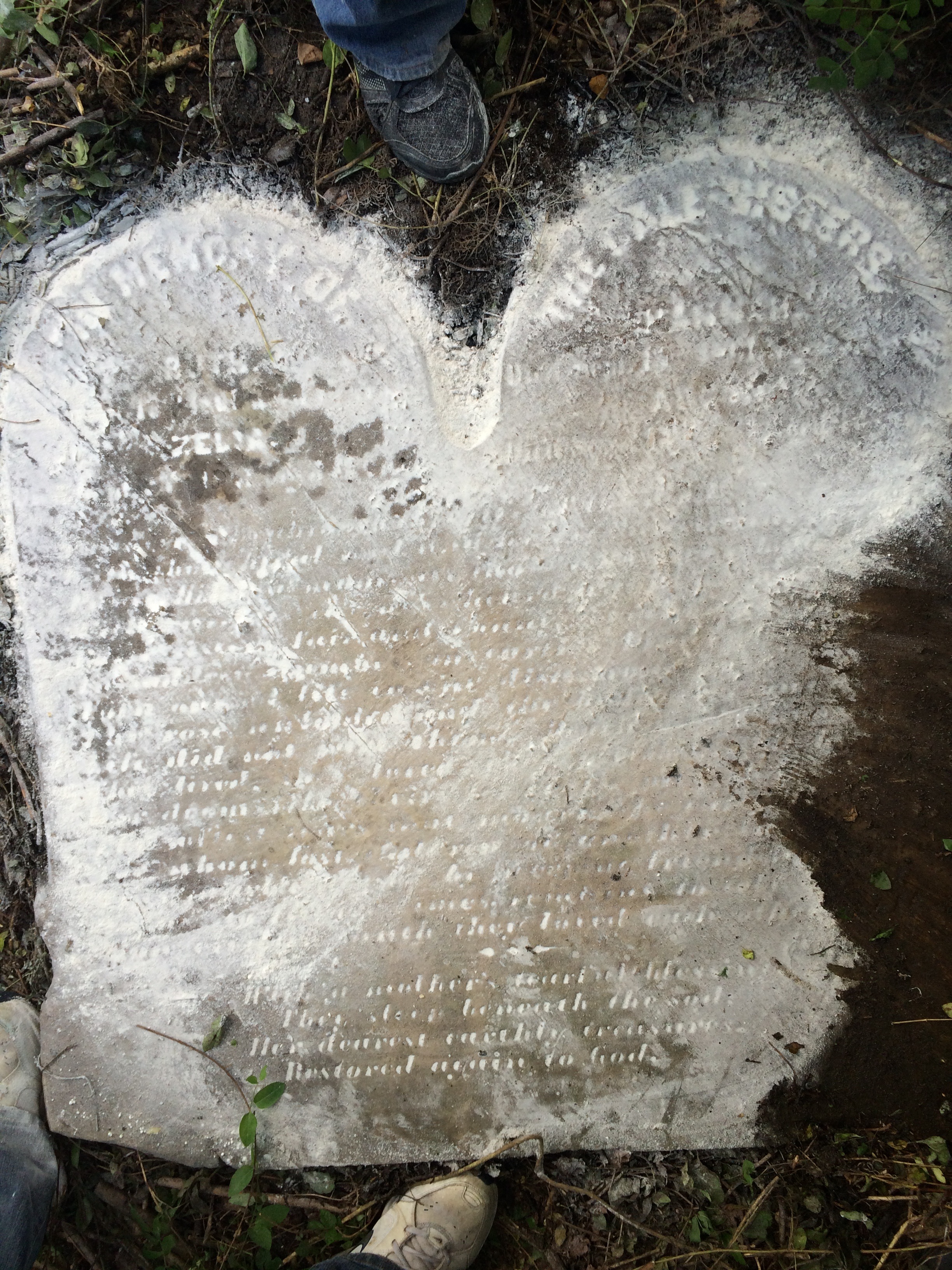 Above: The Gale Sisters grave marker at Mt. Moriah Cemetery in Philadelphia. The stone is badly degraded, as you can see, but we have the words of the text that were engraved on it:
IN MEMORIAM
Stranger, who through the city of the dead
With thoughtful soul and feeling heart may tread,
Pause here a moment – those who sleep below
With careless ear ne’er heard a tale of woe:

Four sisters fair and young together rest
In saddest slumber on earth’s kindly breast;
Torn out of life in one disastrous hour,
The rose unfolded and the budding flower:

Life did not part them – Death might not divide
They lived – they loved – they perished, side by side.
O’er doom-like theatre let gentle pity shed
The softest tears that mourn the early fled,

For whom – lost children of another land!
This marble raised by weeping friendship’s hand
To us, to future time remains to tell
How even in death they loved each other well.

With a mother’s tearful blessing
hey sleep beneath the sod,
Her dearest earthly treasures
Restored again to God! 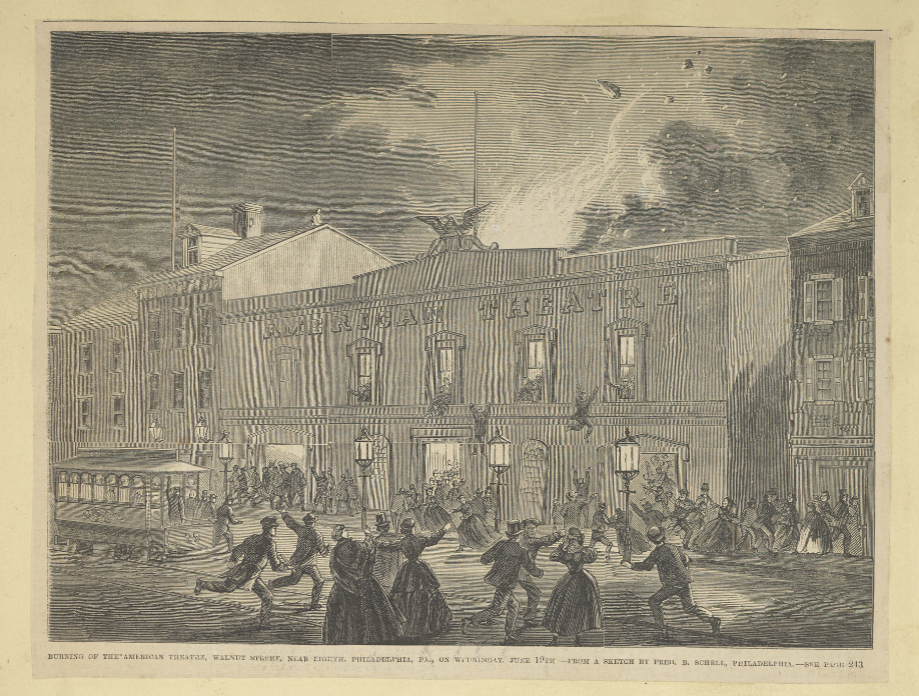 Above: the burning of the American Theatre on Walnut Street, June 19th 1867. The same theater where the ballerinas died seven years earlier is now completely destroyed in a separate fire.

Below, Left: "The New Masonic Hall, Philadelphia", circa 1855. (Collection of the Library of Congress.) 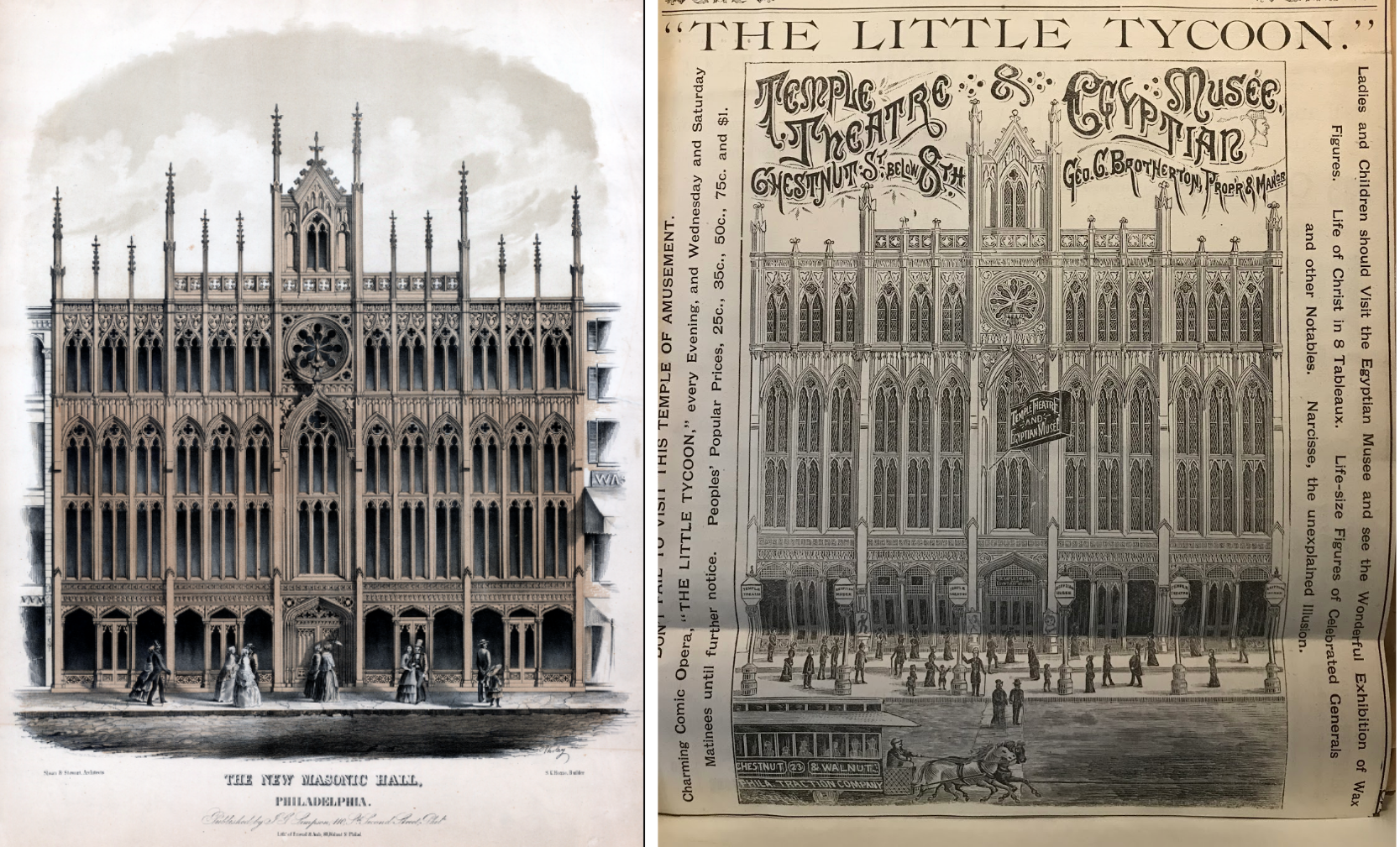 You can see from the image on the right that the producers of The Little Tycoon had taken a certain liberty with perspective, and made the people walking by on the sidewalk much smaller than the image on the right. We know from contemporary newspaper accounts that when it became a theater, originally the owners of the building placed iron fire escapes on the front of the building. But a public outcry was raised, and the point was made that because of all the windows on the facade, a fire inside the building might made these fire escapes nothing but a red hot grill for anyone attempting to use them. So the fire escapes were moved to the sides of the building. They are no fire escapes visible in either of these images, however. When fire did break out in 1886, there was no audience inside, so their efficacy was never tested. 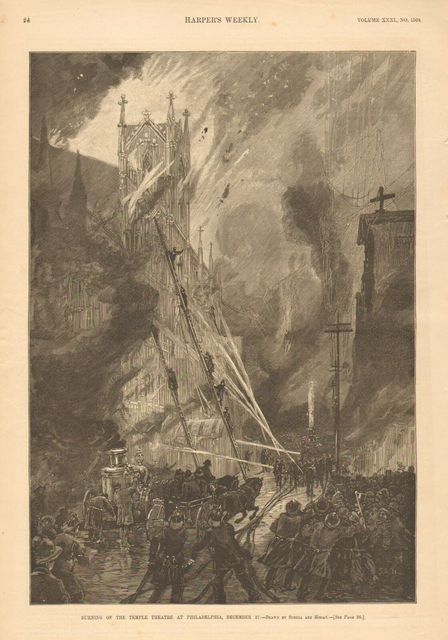 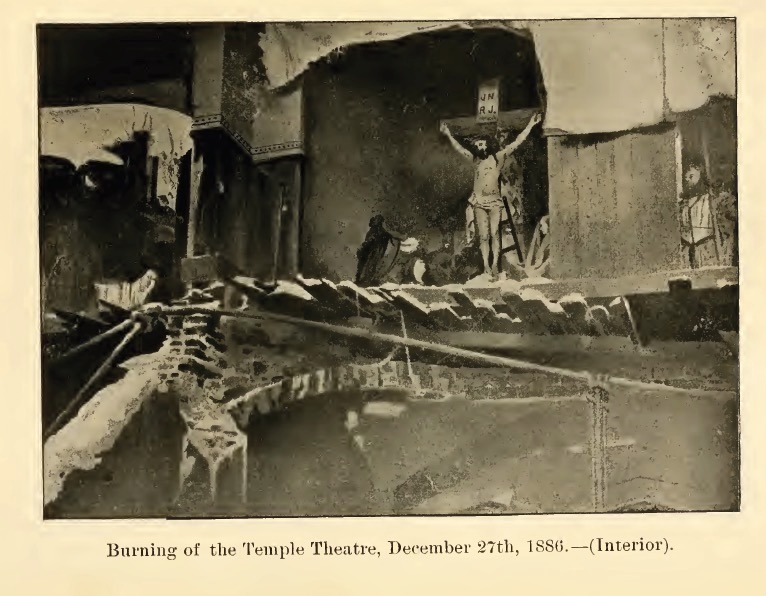 Above, illustrations from Harper's Weekly magazine of the Temple Theatre fire, including a photo of the wax sculpture of the Crucifixion that 'miraculously' survived the blaze. (Many thanks to fellow Philadelphia theater historian Bob Skiba for bringing these two images to my attenetion!)

Below, sketches and diagrams of the Continental Theatre fire, from the morning edition of the Philadelphia Inquirer, September 28, 1892: 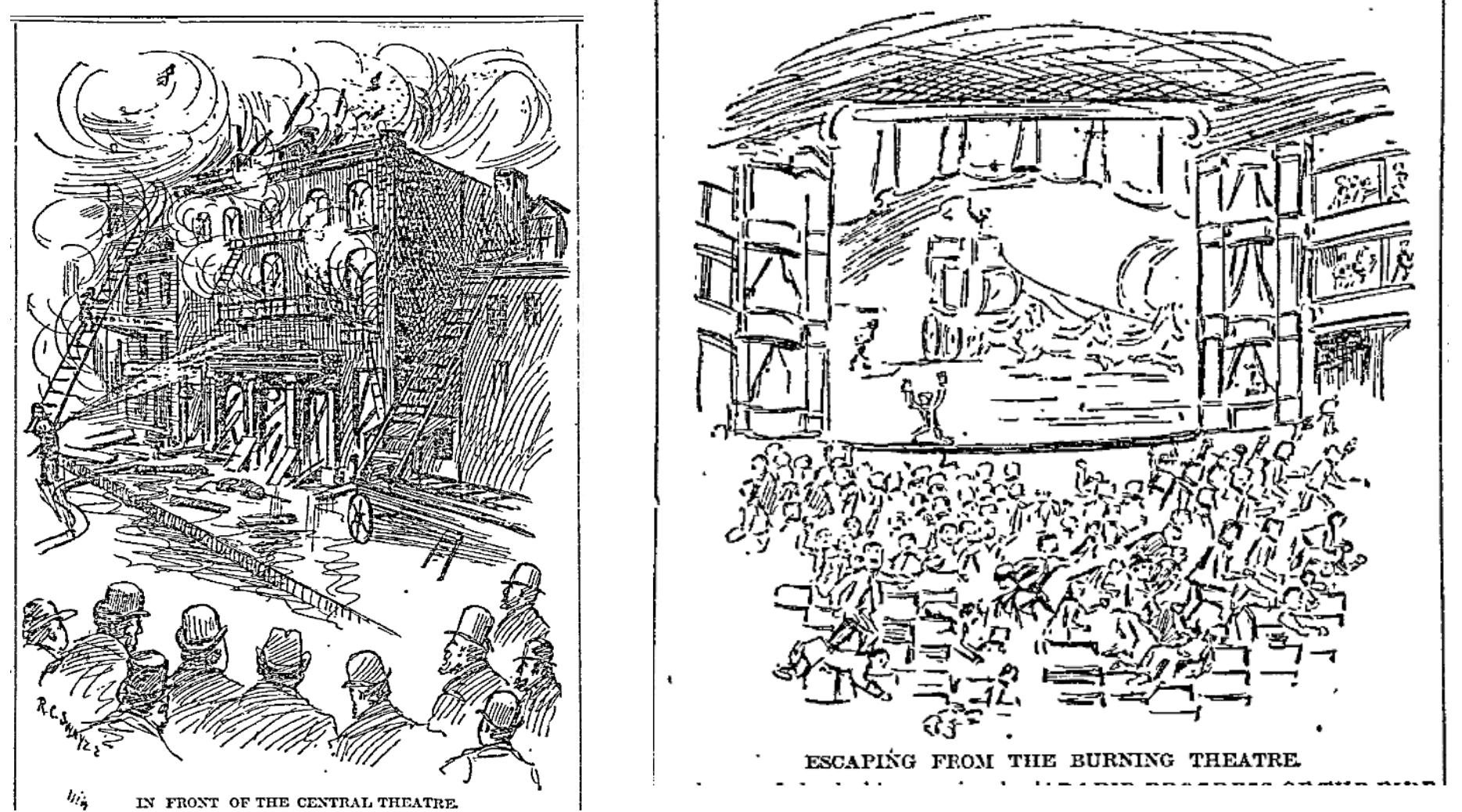 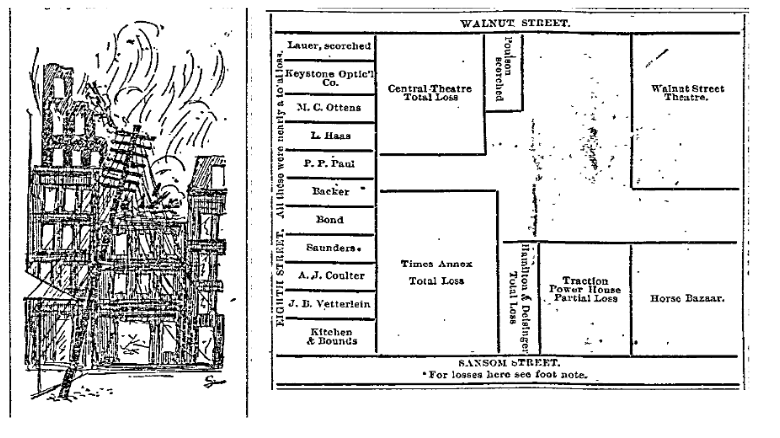 The images in the lower left hand corner shows how the formidable number of utility poles along Sansom and Eighth Streets prevented the Philadelphia Fire Department from accessing the upper stories of buildings - even after the current was turned off, ladders were getting tangled in the drooping wires.

(Note: I am much indebted to the American Antiquarian Society's online database of "America's Historic Newspapers", which gave me access to numerous clippings and articles from 19th Century American newspapers, too numerous to list here.)

"The conflagration of the Masonic Hall, Chesnut Street, Philadelphia. Which occurred on the night of the 9th of March 1819" [graphic] Painted by S. Jones - the Figures by I.L. [sic] Krimmel; Engraved by J. Hill; Printed by W. Barber. Collection of the Library Company of Philadelphia. Persistent link: https://digital.librarycompany.org/islandora/object/digitool%3A127663

Wood, William B., Personal Recollections of the Stage, Embracing Notices of Actors, Authors, and Auditors During a Period of Forty Years. Philadelphia, 1855, p. 237. (Digitized 2008 and available via Google Books.) 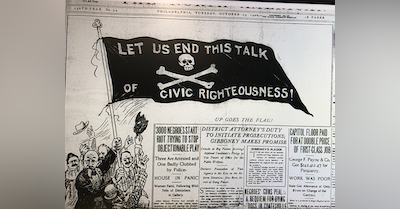 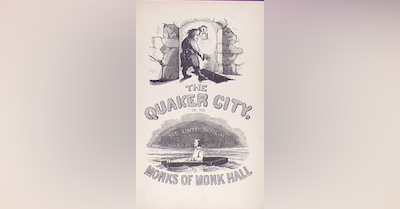