Above, the three portraits of Fanny Kemble by painter Thomas Sully at the Pennsylvania Academy of the Fine Arts.

Sully was eventually to paint Kemble eleven different times, and also painted a portrait of her father Charles Kemble. The artist was known for working very fast, sometimes working from memory, or from sketches he made while sitting in the audience of the theater. Wary of the way artists often courted and flirted with their female subjects (as indeed the portraitist Sir Thomas Lawrence had done with her back in England), she only posed for him in the studio once before her marriage. Later she was to learn to trust Sully and become close friends of him and his family.

Below, here are those three portraits again, but I've downloaded them from PAFA's website so you can see them in greater detail:

From left to right: Fanny Kemble as Bianca in Fazio, as Isabella (in nun's habit) from Measure for Measure, and as Beatrice in Much Ado About Nothing. This last portrait, in which Fanny's head and shoulders seems to float on a foamy sea, was her own personal favorite of the eleven paintings the artist eventually made of her.

Thomas Sully made one other exquisite portrait of Fanny as a stage character during this period. Below is his version of her as Julia in The Hunchback by James Sheridan Knowles. Fanny gave her 'farewell' performance in Philadelphia in this role, at the Walnut Street Theatre, in June of 1834. The painting is still in Philadelphia, in the collection of The Rosenbach museum and library on Delancey St. near Rittenhouse Square. 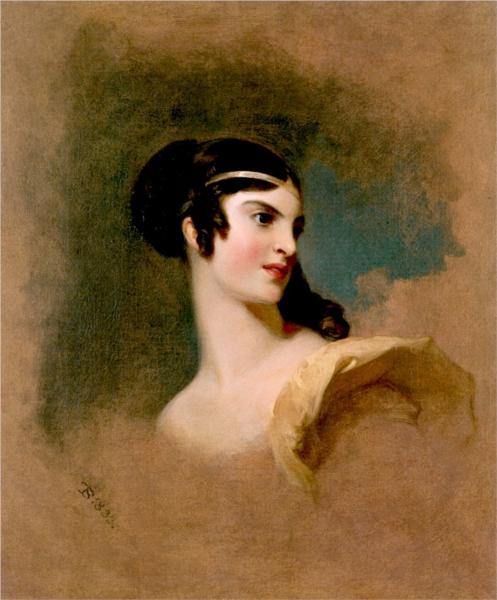 Not shown here is Sully's portrait "Fanny Kemble as Herself" (1834) which is in the collection of the White House in Washington D.C. It is the image we have used to accompany this episode of the podcast. Fanny seems to have owned it herself, and passed it on to her daughter, Sarah Butler Wister. It's not clear to me how it got to the White House, perhaps her grandson Owen Wister, who was a friend of President Theodore Roosevelt, had something to do with it.

Many prints of Fanny and Charles Kemble, made from paintings by London painters in 1830, were widely distributed on both sides of the Atlantic even before their trip to America. Here are two such prints, in which the famous Kemble aquiline nose can be clearly seen on both the daughter and her father. (The captions are from an autobiography by the actress and manager Louisa Lane Drew, who saw Fanny perform when she was a child.) 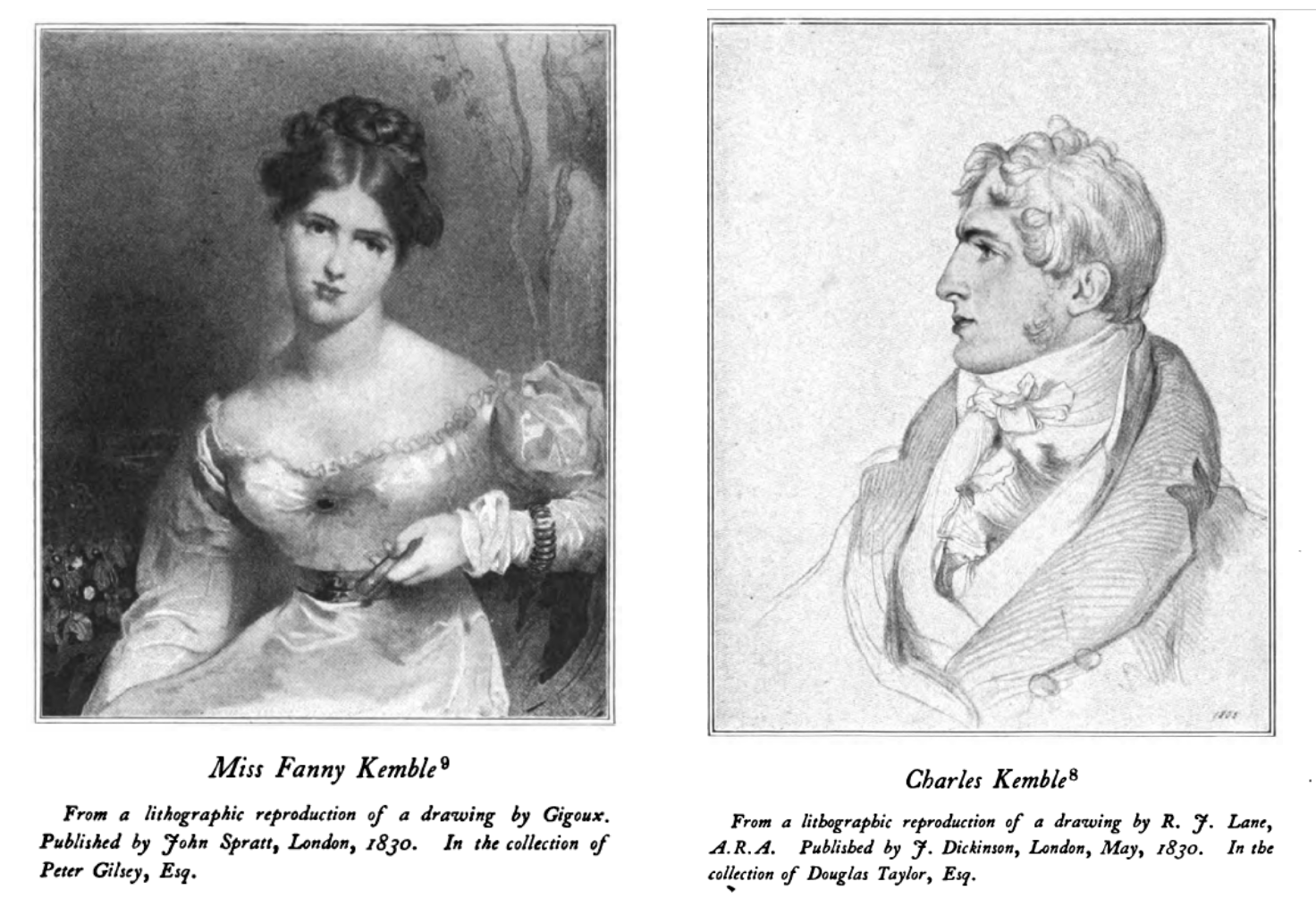 Below is a panoramic view of the city of Philadelphia as Fanny Kemble would have found it when she arrived in the 1830s. Though nowadays Philadelphia has the rather unfortunate reputation of being dirty and strewn with trash, in the first half of the 19th Century it was famed for its cleanliness and neatness. On Saturday mornings the entire city would emerge and clean the front steps and sidewalk in front of their houses, by sluicing them with immense tubs of water. "The town appears to be in a perfect frenzy of cleanliness," wrote Fanny in her journal. "And of a Saturday morning, early, the streets are really impossible, except for a good swimmer. 'Cleanliness', says the old saw, 'is next to Godliness'. Philadelphia must be very near heaven."

This view of the city, made in 1838, was drawn from the steeple of the Independence Hall, looking west along Chestnut Street. The Chestnut Street Theatre where Fanny and Charles Kemble performed, is the second building from the corner, on the right. 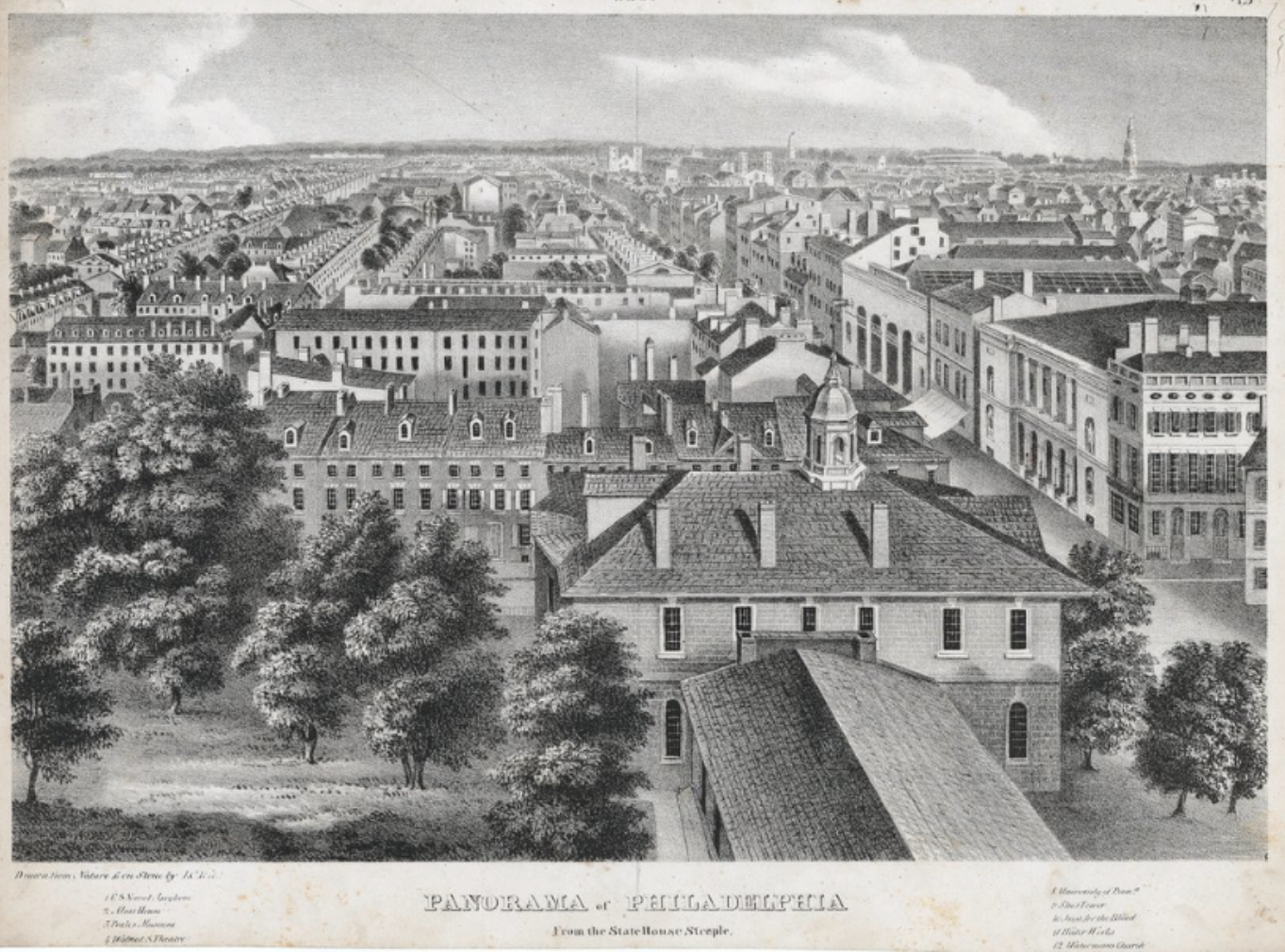 When Fanny and her father arrived from New York, several popular engravings of her were already available to the public. Here is a print of her in four of her stage characters (Mrs. Beverly, Belvidera in "Venice Preserved", Juliet, and Euphrasia in "The Grecian Daughter" -  a role her aunt Mrs. Siddons had made famous). 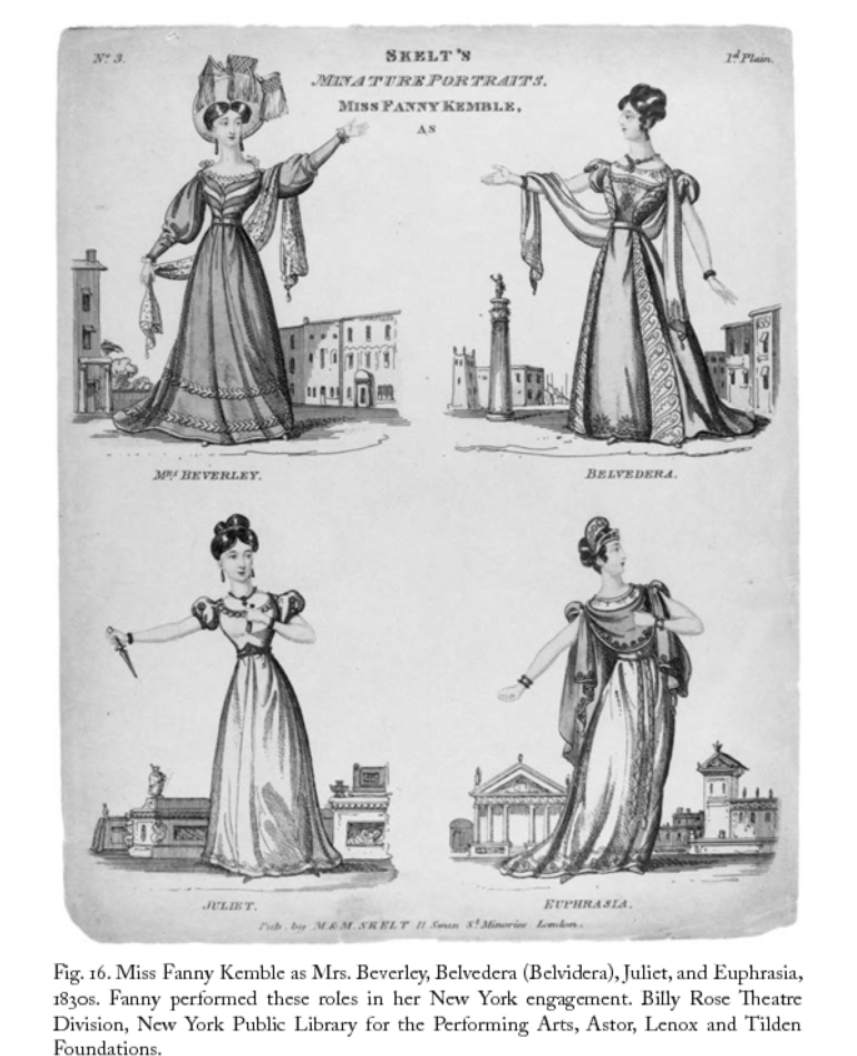 After some searching, by the way, I finally came across a picture of Fanny's ardent suitor, Pierce Mease Butler (in the Furness Theatrical Collection of the University of Pennsylvania.) In most of his later photographs he comes across looking quite peevish and sour, so it was interesting to see young Pierce in his blooming youth. This might help to explain why Fanny found him so attractive in their early years together. 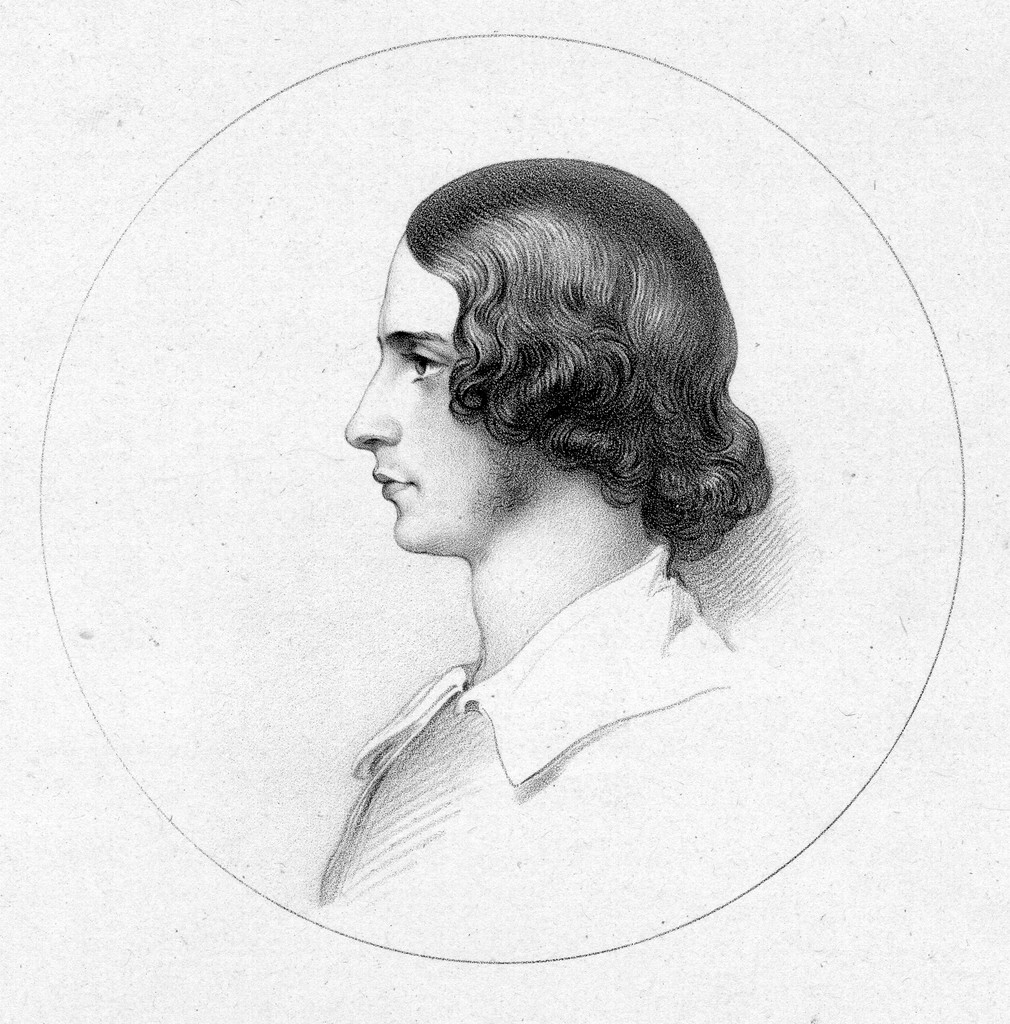 Pierce, as we mention in the podcast, often took Fanny out riding. Her descriptions of the local countryside northwest of the city of Philadelphia were so touching that it inspired a craze for many others to ride up along the Schuylkill River Valley and Wissahickon Creek. Here is a drawing of Fanny Kemble on horseback, in a caricature based upon the descriptions of her excursions in her Journal. "Go it, old fellow!", she encouraged her horse, despite the fact that his rear legs are too short. Her father and Aunt Dal can be seen, hazily, in the background. The headgear that she would wear to keep her hair under control was known as the "Kemble Cap", and became fashionable for a time. Later, when she was married, Fanny was known to go riding around Philadelphia in male riding attire, which caused considerable comment! 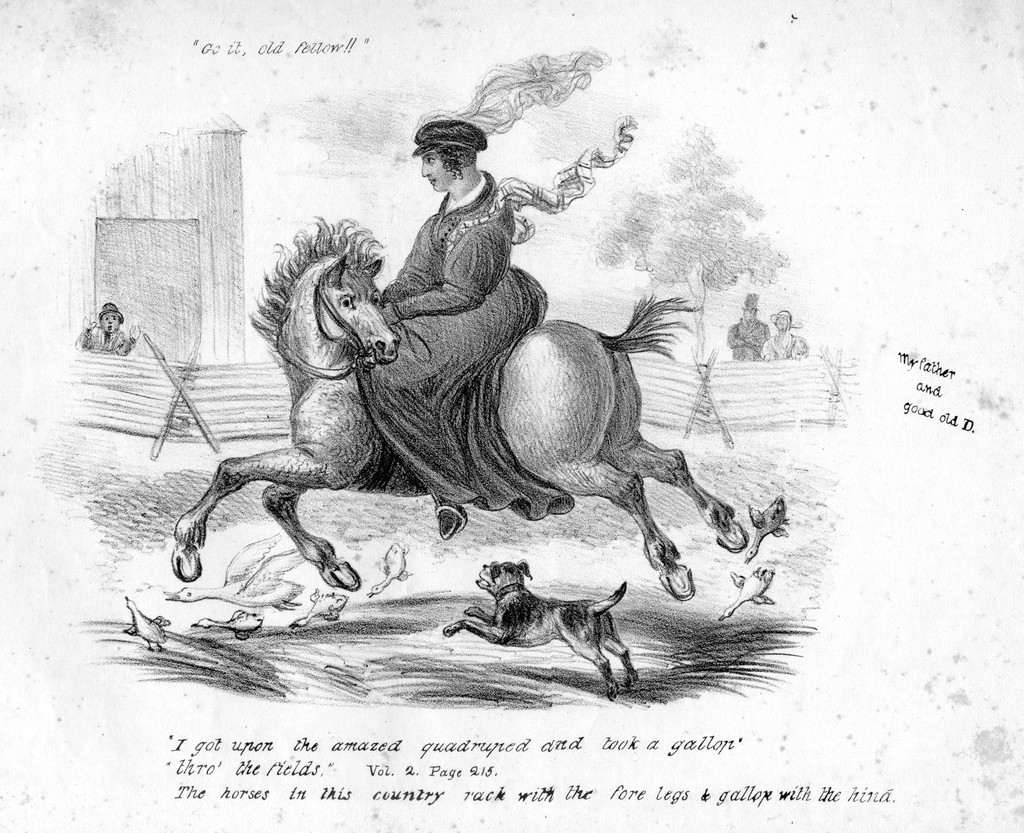 Wood, William B., Personal Recollections of the Stage, Embracing Notices of Actors, Authors, and Auditors During a Period of Forty Years. Philadelphia, 1855, p. 369. (Digitized 2008 and available via Google Books.)